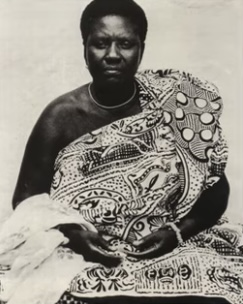 Nwanyereuwa was an Igbo woman from southeastern Nigeria who became famous because of her leadership in the Aba Women’s War in 1929. Nwanyereuwa’s exact birth and death dates, as well as her exact place of birth are unknown. However, by 1929, she had become an influential market woman living in Oloko, in the Aba region where she was famous for selling palm oil and palm kernels. Though little is known of Nwanyereuwa’s personal details, or any of the major events of her life before or after 1929, she is remembered and revered for her leadership role in the Aba Women’s War.

Upon hearing that British colonial authorities who governed Nigeria at that time, were attempting to implement new census and taxation measures on women in her region, Nwanyereuwa took action that changed the course of Nigerian history. She utilized the market networks common in traditional Igbo society to organize a women’s movement against local Igbo warrant chiefs, particularly one Chief Okugo. Warrant chiefs had long been the main collaborators with British colonial authorities and routinely enforced their policies.

The common form of protest among Igbo women in this period was a mechanism known as “sitting” in which women would gather at the compound (or home) of the wrongdoer to sing, dance, and generally create a disturbance. Sitting was generally used as a form of punishment as well as to influence change. In this instance, Nwanyereuwa and her fellow market women were calling for Chief Okugo to resign from his position as warrant chief. They surrounded his compound, singing songs throughout the night, before eventually mobbing him and damaging his home.

Nwanyereuwa’s call to sit in protest of the warrant chiefs who had agreed to the British’s new taxation, spread far and very quickly, resulting in thousands of Igbo women gathering outside the home of Chief Okugo in mere hours. Word spread throughout Eastern Nigeria the following weeks, and riots against the British broke out across the region. Though an estimated 50 to 60 Igbo women were killed during the rebellion, their efforts did result in the delay of new taxation policies for a few years.

In March 1930, just two months after the Aba Women’s War, Nwanyereuwa is quoted as saying, “We had no money to pay tax. I was once a rich woman, but as [Okugo] had been taking money away from me I had now no money.”

Nwanyereuwa is credited with starting a movement which ignited anti-colonial sentiment to many historians was the beginning of the independence movement in Nigeria and across West Africa.  Her leadership in the Aba Women’s War is symbolic of the power of women’s influence in colonial Igbo society.