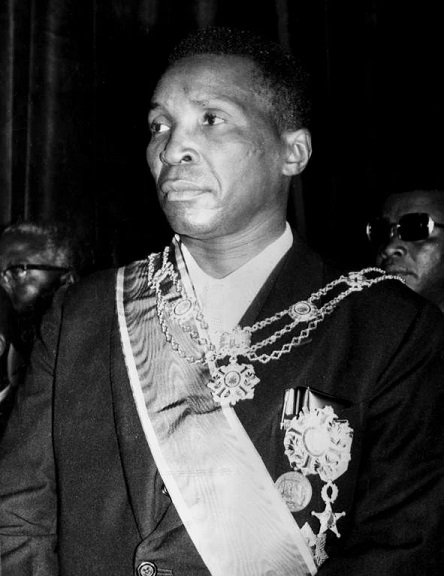 Francisco Macias Nguema was the first president of Equatorial Guinea. He was born on January 1, 1924 in the village of Nfengha, Equatorial Guinea then a Spanish colony. His father was a traditional healer. As a youngster Nguema attended Catholic schools. As a young man Nguema became a court clerk and later a court interpreter. Supported by the colonial administration, he was rapidly promoted, first as mayor of the capital city, Malabo, then Minster of Public Works and finally as deputy President of the governing council.

Nguema quickly consolidated his power. He promoted his allies to positions of authority. Opponents were replaced by people he considered trustworthy, regardless of their competence. In 1971 he issued a series of decrees and laws that gave him unbridled power. Decree 415 granted all direct powers of government and institutions to the president. Law 1 made threats against the president a crime punishable by death. The penalty for insulting the president was 30 years imprisonment.

On July 14, 1972 a presidential decree made Equatorial Guinea a one-party state. Nguema was declared President for Life of the nation and head of the single political party. In July 1973 a plebiscite vested absolute power in the president with 99.9% approval. There was no accountability system for government funds. Nguema spent lavishly and freely on himself, his family, and his allies.

A cult of personality around the president was promoted. Nguema distrusted intellectuals, the Catholic church, and his ministers and aides. Decree 6, announced on March 18, 1975, branded private education as subversive and outlawed it. He banned the use of European names, western medicine, and the word “intellectual.”

By the mid-1970s Nguema had become violent, unpredictable, and paranoid. He persecuted and terrorized freely. Human rights abuses were widespread. The economy was in a shambles as thousands of people fled the country. Nguema banned ocean fishing in order to destroy boats that allowed people to escape Equatorial Guinea. By 1977 more than 65% of the national legislators and at least ten people who had served as government ministers had been killed. Of a population estimated at between 300,000 and 400,000 nearly 80,000 were killed.

In 1979 the United Nations condemned Nguema’s violent, brutal rule. He turned to North Korea for help, sending his wife and three children there to live. On August 3, 1979 Teodoro Obiang Nguema Mbasogo, who had been a military governor and vice-minister of the armed forces, organized a successful coup. Francisco Nguema eluded capture for several days but on August 18, he was found hiding in a forest. He was imprisoned and on September 24th brought before a military tribunal where he was charged with genocide, mass murder, embezzlement of public funds, treason, and violation of human rights. On September 29th 55-year-old Francisco Nguema was sentenced to death and executed.

Nguema was married with four children: Monique, Maribel, Francisco and another son. Monique has written a book about her 15 years spent in Pyongyang, “I’m Monique of Pyongyang.”