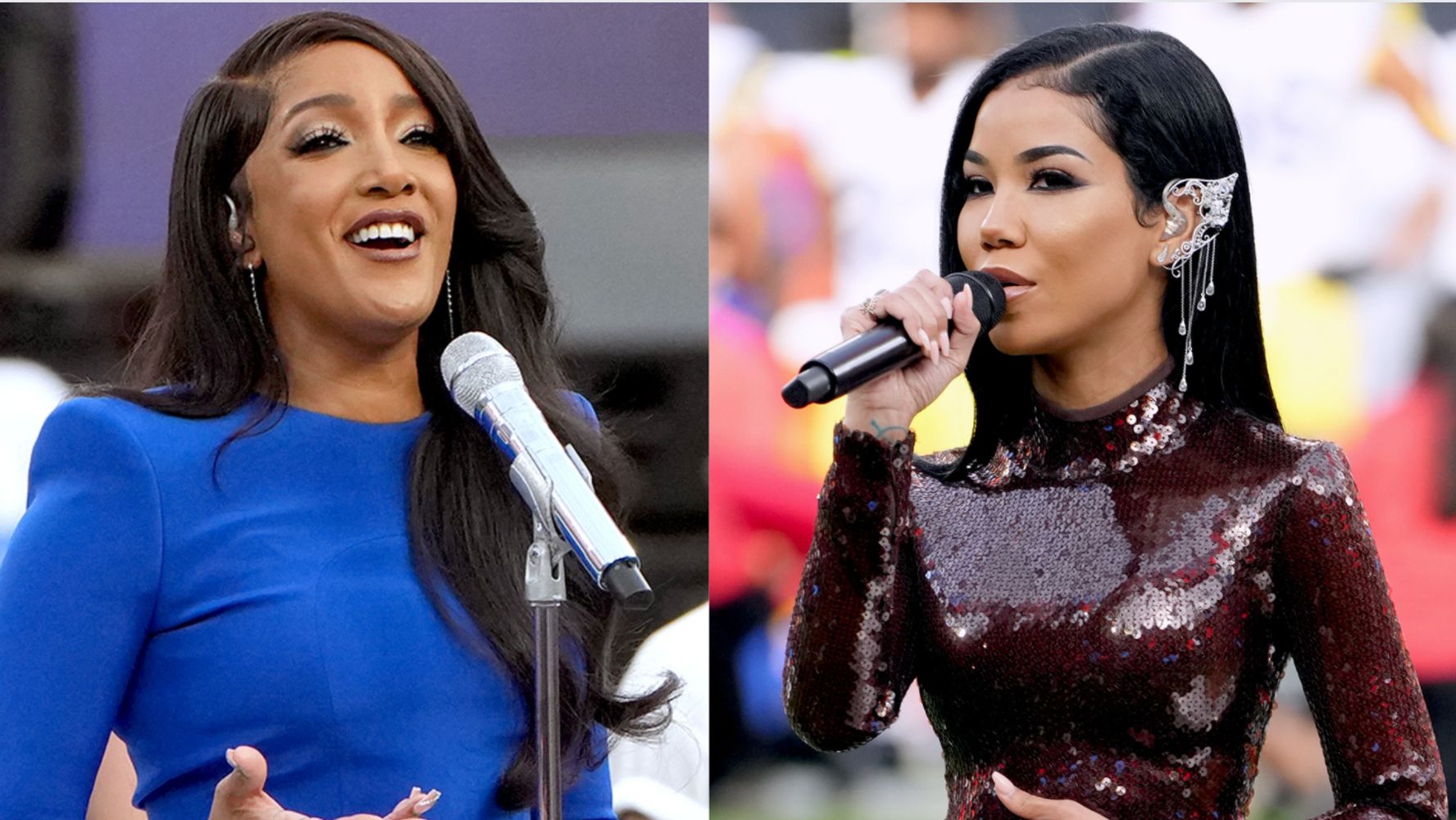 Fans who tuned in early to Super Bowl LVI on Sunday were treated to a glorious two-hander from Jhené Aiko and Mickey Guyton during NBC’s preshow presentation ahead of the big game.

Aiko, an R&B singer known for her soulful and soothing vocals, delivered a stunning performance of “America The Beautiful, clad in a sequined gown and accompanied by a harpist.

Guyton, meanwhile, waited downfield preparing to sing the National Anthem before the Los Angeles Rams and the Cincinnati Bengals kicked off the game at SoFi Stadium.

But when the camera panned to the breakout country music star, who is perhaps the most prominent Black woman currently working in the genre, NBC mistakenly labeled her as “Jhene Aiko” in a chyron that briefly appeared on screen.

Eventually, the camera returned to Aiko, who concluded “America the Beautiful” in spectacular fashion.

Guyton went on to hit all the right notes in her soaring rendition of the national anthem moments later.

But by then, the mistake had already caught the attention of viewers on social media.

Many fans quickly expressed their disappointment at NBC for mixing up two women of color performing on one of the world’s biggest stages.

Not them showing Mickey Guyton with Jhene Aiko’s name underneath. Come on now… pic.twitter.com/EVAKQ1ZOnc

Who is this cam op for the Super Bowl thinking Mickey Guyton is Jhene Aiko?

Mickey Guyton and Jhene Aiko both did an amazing job… still tryna figure out how they were mixed up… “technical difficulties” are always so convenient. Yall had one job. Don’t mix up the Black folk during Black History Month. Lol#SuperBowl #SuperBowlLVI #BlackHistoryMonth pic.twitter.com/0byomfmNlz

NBC apologized for the mistake hours after the performance concluded.

“Leading into Jhene Aiko singing ‘America the Beautiful,’ we incorrectly showed Mickey Guyton and misidentified her before showing Aiko’s performance,” an NBC Sports spokesperson said in a statement tweeted just before 8 p.m. “We apologize to both artists for the error.”

Guyton, who made history as the first Black woman to be nominated in the Best Country Solo Performance category in 2021, told HuffPost last year about the responsibility she feels being in the spotlight.

“For the longest time, before this moment happened for me, I was trying to prove that I was just a country singer that loved country music. I was told to not even focus on the Black part of me, but that’s who I am,” Guyton said “It’s not a pigeonhole at all to me, and I am trying to normalize it as much as possible. How I normalize it is by opening the door for other Black women, especially in country music.”

Ahead of the big game, Guyton also expressed how meaningful the opportunity to perform at the Super Bowl was, both to her personally and to her larger community.

“It’s Black History Month, and a Black country singer gets to sing the national anthem at the Super Bowl. Wow,” she told The New York Post. “This is a huge moment for me. It’s a huge moment for Black people. And I want to represent that in the best possible way that I can.”

Guyton has yet to acknowledge NBC’s error, but Aiko shared a photo of the moment on Instagram Monday, tagging the singer and writing, “i am all ✨lol” alongside a shrug emoji.