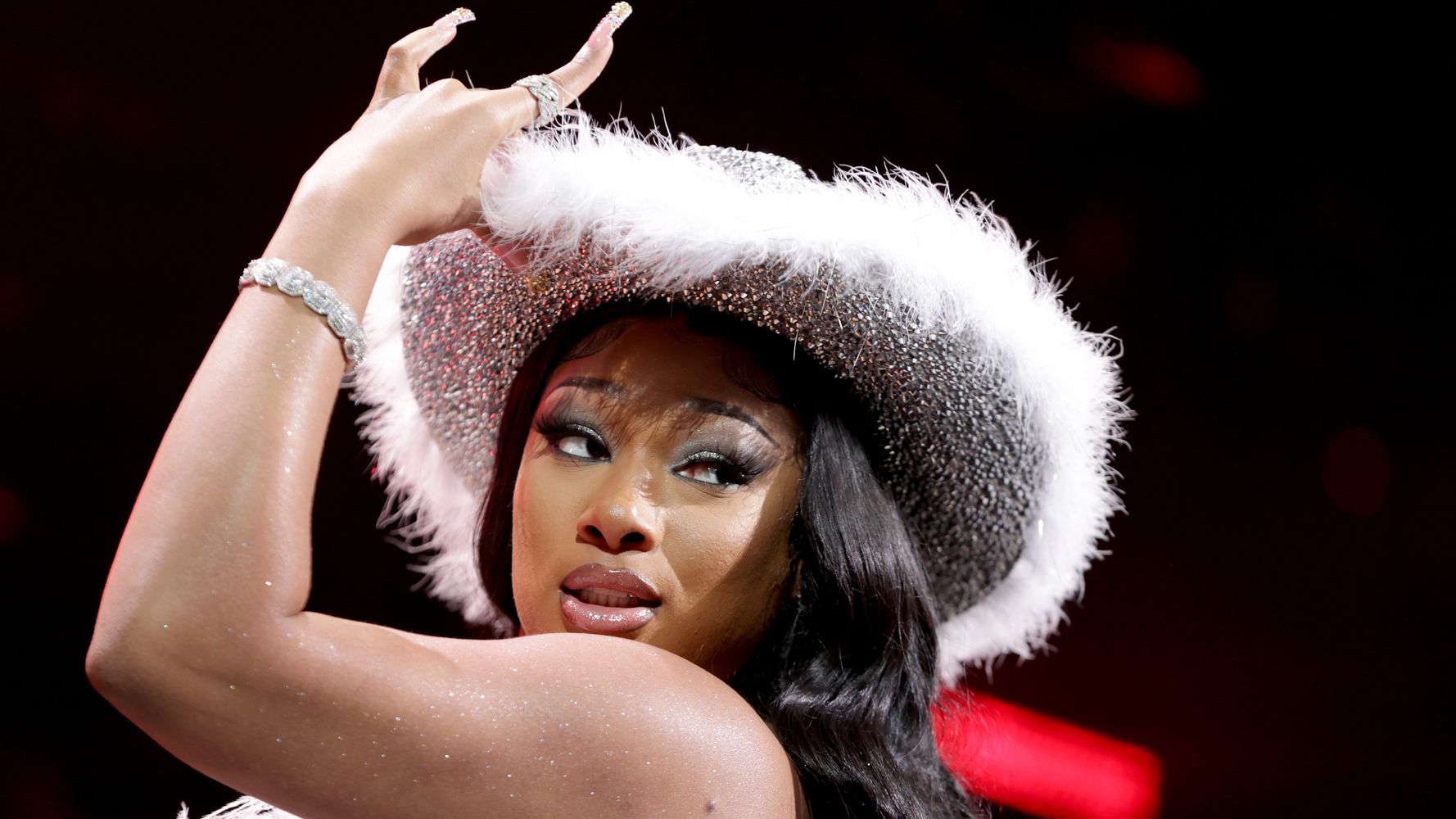 Megan Thee Stallion has already had a long day when we talk. Her music, various brand deals, hottie boot camp, media obligations and more keep her busy. But that doesn’t stop her from showing up to our Zoom interview with all the energy and a freshly styled lace — well over 30 inches to complement the stallion’s height — accented with colorful tinsel.

“Hey, girl!” she shouts. The Grammy Award-winning rapper is promoting her new partnership with Frito-Lay’s Flamin’ Hot Cheetos and Doritos. The deal includes the release of Meg’s new song “Flamin’ Hottie,” inspired by Salt-N-Pepa’s “Push It,” and a coveted spot in a Super Bowl commercial, just two days before her 27th birthday. It makes sense, really. This is the woman who brought us “Hot Girl Summer” and has an allegiance of hotties (the name for her fan base) globally.

“I’m so happy this was such an easy layup because obviously I’m the hot girl coach,” Meg told HuffPost. “I am thee H-town hottie. Everything about me is hot. How are you doing hot things without me? Getting the partnership with Frito-Lay Hot Cheetos. I’m lit.”

It’s yet another milestone under her belt. Since her rise to stardom, the “Thot Sh*t” rapper has been getting to the bag. She’s struck deals with Nike, Popeyes, Revlon, Snap and FashionNova, just to name a few. Meg is also tapping into the television streaming game and recently landed a first-look deal with Netflix to create and executive-produce content.

In the midst of the brand deals, interviews and releasing “Something for Thee Hotties,” Meg managed to graduate with a bachelor’s degree in health administration from Texas Southern University in Houston. She credits her late mother and grandmother, whom she calls her “heroes,” for her strength.

“When I put my mind to something, I have to do it. No matter what it is, I got to see it through, I got to finish it,” the rapper explained about her journey. “I started school, my grandmother was definitely on my butt. I started school, my mom was alive, my great-grandmother was alive. So when they passed, I was just definitely like, you know what, I’m not doing it just for me, but I’m doing it for them, too, because I know they would be so proud.”

In addition to a jampacked schedule, the past couple of years have had their share of adversity for the rapper. But Meg explained that being raised with a strong foundation has sustained her as she continues to embark on her journey while being in the public eye.

“I feel like no matter what comes at me, whatever I’m focused on, I’m going to reach that goal, I’m going to jump over those obstacles and I’m going to do what I’m supposed to be doing. You can’t deter me from my path. What’s meant for me is for me, and I feel like that’s why I’m so blessed because it’s just for me.”

She said it’s important for her, especially as a Black woman, to not only handle all sides of her business well but also to empower herself and others who look like her in the process. Meg said it’s her duty to use her platform “to put on for us,” especially because Black women more often than not go unheard and unseen.

“When you grow up and you’re tall and you thick, and you very intimidating, people always got something to say. People always coming at you, but I’ve always been very confident,” she said. “Other women that really look like me, I feel like I had to give us that little extra spice. I had to let them know I’m thick. Yes, I’m here. I’m tall. Yes, I’m here. I’m brown-skinned. Yes, I’m here. What’s up? I’m not scared of who I am. I love me. So you could either get with it or get lost.”

The rapper said 2022 is about to be an even bigger year for her than previous years. She’s manifesting bigger bags and more mental strength.

Her new album, which doesn’t have a release date yet, will be a bit more vulnerable than the hotties we have heard before. Meg said she’s taking her time making her new music and taking more control of her narrative.

“I feel comfortable saying things and opening up more and talking about my experiences and my feelings because sometimes when you’re a strong Black woman you wear everything with a smile,” she said. “If I’m going through something, you would probably never know it. But in this album right here, I feel like I’m definitely letting the people know I be going through it, too, but I’ll be getting through it fa’ sho. You’ll never see it on me. I don’t look like what I’ve been through.”

The Top Zeta Phi Beta Graduation Photos of Spring 2022
Lucky Daye delivers a powerful performance of “A Song For You”
1955 Warrant In Emmett Till Case Found, Family Seeks Arrest Of Woman
WTF Is ‘Pretty Privilege’?
University President Accused Of Defaming Missouri HBCU By Calling It A ‘Regional Institution’