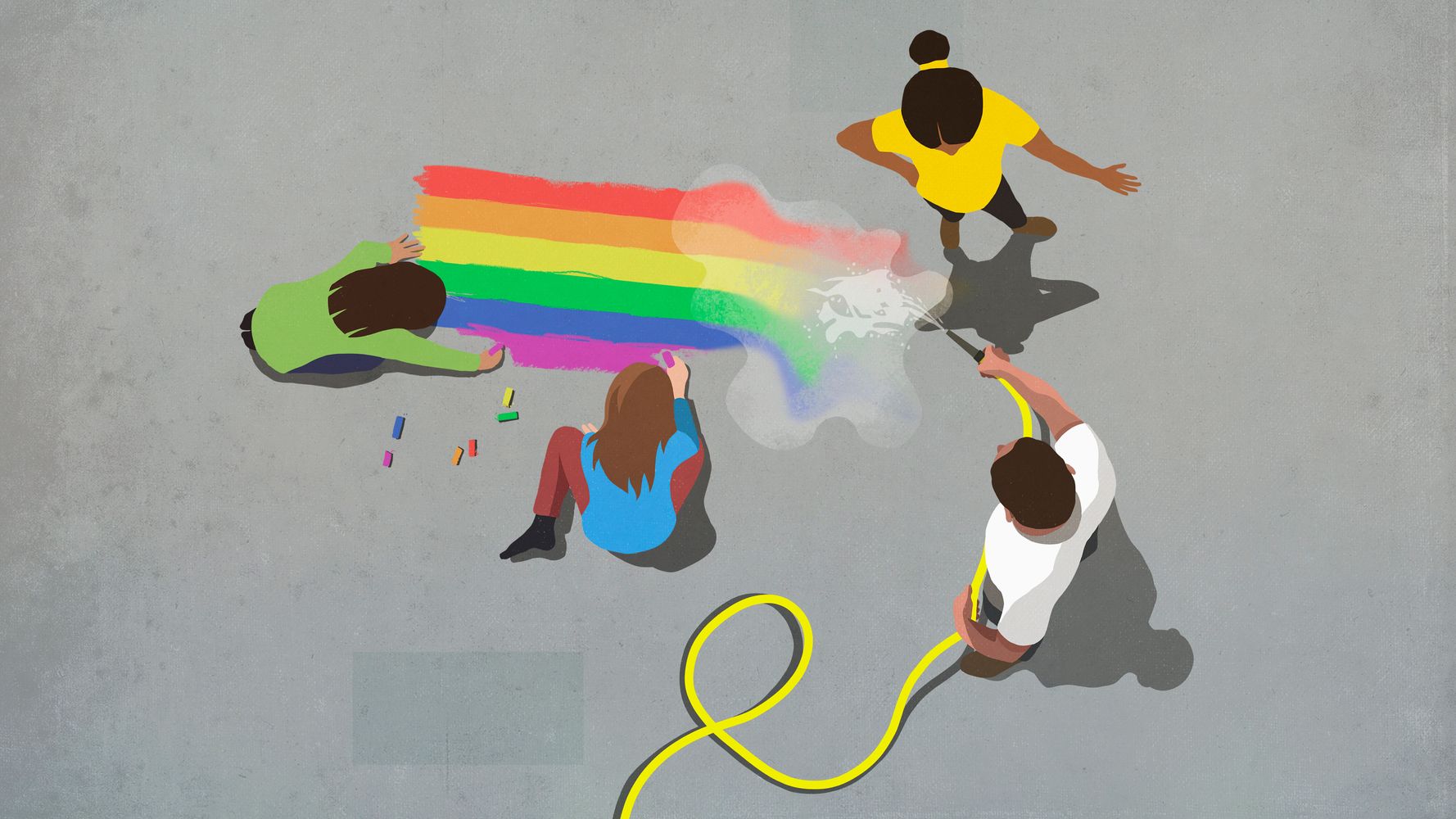 Earlier this week, Republican Gov. Ron DeSantis signaled his support for a controversial Florida bill that would ban certain discussions of sexual orientation or gender identity in the state’s public schools.

The Parental Rights in Education bill, dubbed the “Don’t Say Gay” bill by its critics, would apply to such topics in primary grade levels as well as in cases where the discussions are deemed not “age-appropriate” or “developmentally appropriate for students.”

But the proposal doesn’t go so far as to define what might be considered “age-appropriate” or “developmentally appropriate.” Opponents of the bill say it’s worrying that under the law, parents could sue schools if they thought the schools violated any provisions of the order.

In a tweet Tuesday, President Joe Biden called the proposal a “hateful bill” and said he would give his full support to young people who may be affected by it.

Supporters of the bill say it empowers parents, giving them a clearer say in their children’s education. Critics of the legislation worry that it would endanger LGBTQ children who already are often bullied, ostracized and isolated at home or in their communities. (Some school districts in Florida already have policies that say teachers must notify parents before using a student’s requested name or gender pronouns.)

“Signing the ‘Don’t Say Gay’ bill into law would press the mute button on open discussion in classrooms — the very place where it belongs,” said Sam Ames, director of advocacy and government affairs at The Trevor Project, the largest suicide prevention and crisis intervention organization for LGBTQ and questioning youth.

“Even worse, by erasing sexual orientation and gender identity from classroom environments, it would erase LGBTQ students themselves,” Ames told HuffPost.

A measure like the one moving through the Florida Legislature could have a devastating effect on the mental health of LGBTQ students in the state, he said.

Having at least one adult with whom to share your identity is the No. 1 protective factor against suicide for LGBTQ youth. Over the past year, 42% of LGBTQ youth seriously considered suicide and 94% said recent political actions negatively affected their mental health, according to a report from The Trevor Project.

But LGBTQ youth who reported learning about LGBTQ people or issues at school had significantly lower odds of attempting suicide in the past year, according to the group.

For many LGBTQ youth, supportive teachers are often a vital haven

If passed, the bill would create an environment where teachers fear repercussions for a curriculum that includes historical moments for transgender rights or an important historical figure who happened to be LGBTQ.

For LGBTQ students, it’s a lot easier to gauge if a teacher is a safe person to come out to if they’re allowed to “say gay,” whether that’s acknowledging someone’s pronouns, discussing gender identity issues or including books on the experiences of LGBTQ+ characters in their curriculum. So often, a teacher or school counselor is the first person (or at least the first adult) a child comes out to.

Madison Ellsworth, a middle school English teacher in Virginia, said she knows this firsthand. In her classroom, Ellsworth tries to teach her students to accept their peers and encourages open discussion to learn more about one another.

“For instance, in book club with some of my seventh grade students last year, several of the books we read focused on LGBTQ romances or stories,” Ellsworth said. “Reading these together showed my students that I would accept them, regardless of their sexuality or gender identity.”

Because of her inclusive curriculum, Ellsworth said her non-binary and non-conforming students feel comfortable opening up to her.

For Janelle Perez, a business owner who’s running for a Florida state Senate seat, it was school — and an understanding religion teacher in particular — that first provided an affirming space.

“The first time I said ‘I’m gay’ out loud was to my eighth grade teacher,” she tweeted Tuesday night. “I was utterly terrified of anyone finding out, but I felt safe and protected. Florida’s ‘Don’t Say Gay’ bill would strip that safety from thousands of children.”

In an interview with HuffPost, Perez reflected on that period of her life: She was going to an all-girls high school at the time, and her religion teacher was “cool, young and always approachable” ― she’d even attended the same high school. That teacher ended up becoming a sounding board for Perez in a way that the teen’s deeply Catholic, conservative parents couldn’t be.

“There are things kids just don’t want to tell their parents about or can’t ― my sexual orientation was definitely that for me,” Perez said. “My teacher provided me with a type of refuge that, at the time, I couldn’t get at home.”

That was back in the early 2000s, but even now, only 1 in 3 LGBTQ youth finds their home to be safe and LGBTQ-affirming, according to The Trevor Project’s 2021 National Survey on LGBTQ Youth Mental Health.

Now a mother herself, Perez worries about what she sees in the intentional vagueness of the proposal’s language: What, exactly, will be considered age-inappropriate in classrooms throughout Florida?

“How can a teacher prepare her pre-K or kindergarten curriculum that’s about family without addressing that there are going to be LGBTQ families?” she said. “Under this law, children of LGBTQ parents wouldn’t be able to share stories about their life at home.”

“Before having the talk with their parents, students sometimes feel like they can rehearse with a teacher as a trusted adult whom they know will not retaliate because it’s a school environment.”

For J Wilson, a college journalism student in North Texas, it was a school choir director whom he felt safe enough to come out to in seventh grade.

“I was leaving the counselor’s office after bawling my eyes out to her when my choir director ran into me in the hallway,” Wilson told HuffPost. “He asked what was wrong, and I told him. I just felt like I had this huge secret that no adult that I trusted had heard, and it felt like the dam was broken.”

In that moment, Wilson cried and confided to his teacher, even if it meant being late to Spanish class. The teacher stayed in the empty hallway until Wilson wasn’t hyperventilating anymore and assured the teen that, gay or straight, he was still the same person at heart.

“I remember him telling me that anyone who would see me differently as a result was in the wrong, not me,” Wilson said. “While I didn’t tell my parents immediately after this, it definitely did help that I had already gotten the chance to come out to an adult on my own terms before and had a positive response.”

Wilson said that coming out to a teacher is like a “trial run for a kid who’s preparing to have to do it over and over for the rest of your life.”

James Vining, a therapist at the Gender & Sexuality Therapy Center in New York City, said that feeling is incredibly common.

“Students sometimes feel like they can rehearse with a teacher as a trusted adult whom they know will not retaliate because it’s a school environment,” he told HuffPost.

School itself can function as an alternate home where a student who’s questioning or is LGBTQ+ has room to “feel seen and free,” Vining told HuffPost ― a space to figure out how they want to express themselves without having to worry about their parents’ judgment. (And, in some cases, find other gender-questioning peers at school to talk to.)

Teachers we spoke to worry that a measure like the one proposed in Florida could punish them for simply acknowledging that gay people exist. (And this certainly isn’t an isolated legislative push; over the last year, state legislators have introduced a record number of bills that would affect the rights of transgender youth. In many parts of the country, teachers already feel as if they’re walking on thin ice because of policies restricting teaching on racism.)

“I think if this bill passes, it would make teachers feel even more like they need to walk on eggshells in the classroom,” Ellsworth, the middle school English teacher, said. “How old must students be to have ‘age-appropriate’ discussions about LGBTQ issues?”

“Students of all ages are questioning their sexuality and gender identity, and if these things are seen as off-limits to discuss in the classroom, how will that make students feel?”

“This bill will devastate young people in Florida as well as put undue stress on them as they grow up in a world where their identities are summarily erased.”

Whether proponents of the bill want to acknowledge it or not, school has always been as much about socialization as it is learning, said David, a 12th grade teacher in the Tampa Bay area of Florida who asked to use his first name only to protect his privacy.

“If teachers cannot teach young children about diversity or that diversity is dissuaded, those young people will be forced to remain silent, since parents are not always open to such discussions,” he said.

“Kids who already feel isolated could become the victim of bullies, with fear of telling adults,” David said. “This bill will devastate young people in Florida as well as put undue stress on them as they grow up in a world where their identities are summarily erased.”

Growing up and knowing he was gay in the 1970s, David said, he would have really benefited from a safe space at school. He and his fellow teachers aren’t trying to indoctrinate students, he said, they just want the freedom to field questions and open positive discourse that hopefully prevent bullying and make everyone feel accepted.

“Acceptance and understanding in the classroom promote compassion and kindness, two things we all want young people to learn and emulate,” he said.