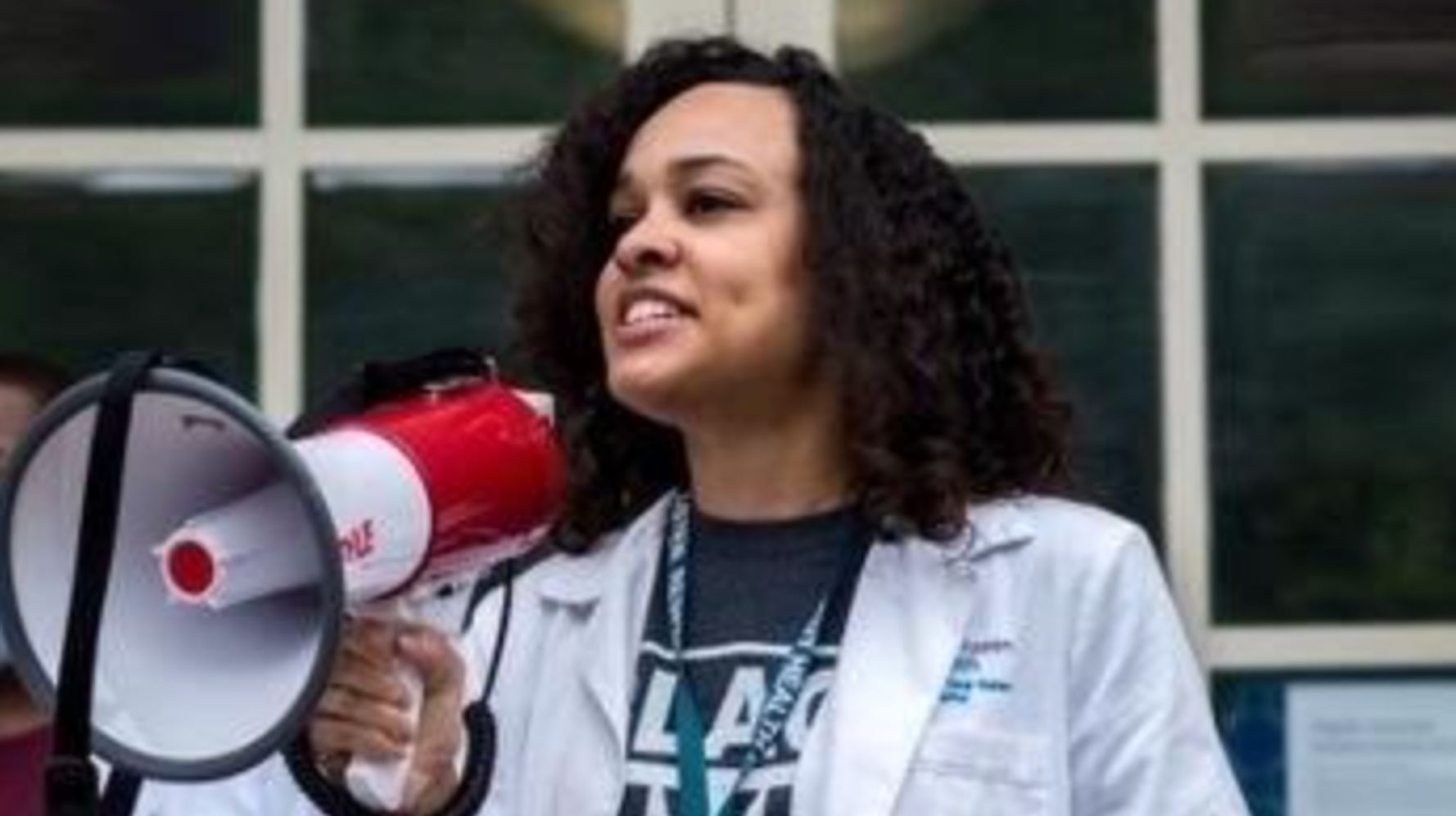 It’s now been a little more than a year since I received death threats while speaking out as a Black doctor. It happened when I was the keynote speaker for a White Coats for Black Lives demonstration at Yale School of Medicine. I implored my colleagues to understand that socioeconomic status does not protect Black lives from racism. Status does not protect my physician father from being followed by police in his neighborhood. Status did not protect my 8-year-old sister from experiencing a delay in medical care because white nurses did not believe my pharmacist mother when she said my sister was wheezing from anaphylactic shock. Status does not protect college-educated Black women, like me, from being more likely to die from pregnancy-related complications than white women who did not graduate from high school.

“Before I was a doctor, I was a Black woman in America, and my white coat will not protect me,” I declared.

After the speech was over, a friend told me I had received online death threats laced with racial slurs as my speech was streamed in real time. The police were brought in, and investigations were made. I got calls from supervisors and advice about how to protect myself: Don’t walk alone. Let the police know if you receive a call from an unknown number. I was pulled off my call shift. My colleague gladly covered for me, and adamantly refused when I offered to pay him back.

But dealing with anonymous death threats isn’t the most difficult part of being a physician activist. They’re scary, but they are instantly recognized as unacceptable, something to be acted upon. I was supported without question and I had nothing to prove. Unfortunately, standing up against racism in medicine on a daily basis is much harder. Exposing it can make people uncomfortable and even hostile, and as a Black woman in medicine (and as one of the less than 2% of psychiatrists in the United States who are Black), when it comes to speaking out, I usually stand alone ― and I always have something to prove.

I like to say that activism is in my blood. My aunt tells me that my passion to fight racism reminds her of my paternal grandfather, her father. I never got the opportunity to meet him (or either of my maternal grandparents), and I blame racism for that. Black people, especially Black men, have shorter life expectancies than white people, in part due to poorer treatment in the health care system and the lifelong stress of racist experiences.

But my grandfather’s actions live on in the stories my dad tells me. He was one of the first African American dentists in Macon, Georgia, and attended Meharry Medical and Dental School. During that time, in the early 1930s, the Georgia licensing board was intentionally failing African Americans, so my grandfather asked his white colleague to appear in person to register for him, while my grandfather sat for the actual exam. Mouths dropped as my grandfather crossed the stage to receive his board certification instead of the white man who’d signed up for the exam using his name. My grandfather had beaten racist white people at their own game.

He didn’t stop there, either ― he led a newspaper and published images of Black people who’d been lynched, while white-owned newspapers ignored or covered up the murders. And despite the violent racism around him, my grandfather, known as “Doc,” still traveled to poor, white areas, as well as Black areas, in the South, and provided free dental care to those in need. He was a true activist, and he inspires me every day.

My father is also a doctor, and like my grandfather, he is an activist and humanitarian as well. Dad has spent much of his time working in free clinics serving primarily Black patients. He has also trained police to effectively identify and manage individuals with autism spectrum disorder, who are more likely to encounter and be harmed by police, especially if they are Black. But even though he’s an Ivy League-trained psychiatrist and medical director, Dad tells me stories of important hospital visitors walking past him to address his white male trainee, who they’d assumed was the one in charge. Once, I asked Dad if this repetitive racism made him angry. “Not really. I feel proud to teach them what a medical director looks like,” he said with a laugh. Now, as the third-generation Dr. Calhoun, I strive to make my father and grandfather proud every day by following in their footsteps.

My desire to speak out against racism also came from my own rage. Growing up in the segregated city of St. Louis, not far from where Mike Brown was killed by police in 2014, I grew increasingly tired of the racism I experienced from a young age. When I was 12 years old and my sister was about 3, a white woman assumed she was my child as we stood in line at the grocery store, waiting for our mom, who’d left us for a moment to retrieve a forgotten item. This kind of “mistaken identity” happened frequently to me. I am not sure if these people assumed I had gotten pregnant at 9 years old, or if they thought I was much older than I was, a racist phenomenon known as adultification. School was no better, and while I enjoyed the academic rigor of my college preparatory school, I dreaded the racism I experienced in a predominantly white environment from my white peers and teachers.

There is no standardized training on navigating racism as a physician ― let alone centralized policies to hold racist physicians accountable ― but there should be. Through trial and error, I have learned ways to stand up against racism in the medical system while protecting myself. I officially report instances of racism that I witness that affect medical care, and I use the word “racism” when I do so, instead of tiptoeing around it. I channel my energy into writing op-eds and studying the effects of racism on the mental health of Black children. I defend my Black patients in real time, challenging colleagues who frame them as angry, and invite them to consider the possibility of depression, given that children and adolescents often present as irritable, instead of sad, when they are depressed. I call out problematic and dangerous examples and framing of Black patients and Black lives, by asking questions at lectures like, “Why did you choose to portray a Black woman as a poor, single mother?”

Sometimes, I feel the burden of speaking up ― and it wears on me. This particular kind of exhaustion is rarely discussed. When we talk about physician burnout, the conversation mostly focuses on long work hours, the vicarious trauma of seeing the health of our patients deteriorate before our eyes, and the toxic “survival of the fittest” mentality of medicine.

But my burnout does not come from that.

It comes from the hopelessness I sometimes feel combating racism when those who perpetuate it are so well-protected. It comes from the expectation to teach about a racist system I did not create, all while white people continue to hold the most academic leadership positions in psychiatry. Take racism away and I’d be peachy. I would use my spare time and energy to write fantasy novels and do research on bipolar disorder. But sadly, racism is too deeply entrenched in our medical system, and our country, for that.

So I am committed to fighting, and nothing ― not my despair, not the lack of support I sometimes feel from the medical community, and not even death threats ― is going to stop me.

Dr. Amanda J. Calhoun is an adult/child psychiatry resident at the Yale Child Study Center/Yale School of Medicine. Calhoun graduated from Yale University with a B.A. in Spanish and received her M.D./MPH from Saint Louis University School of Medicine in St. Louis, where she grew up. Calhoun’s research focuses on identifying and mitigating the mental health effects of racism on Black American children, and is currently funded by an APA SAMHSA Minority Fellowship award. Calhoun has received numerous other awards to fund her global mental health research in Nigeria and Guatemala. She is an avid writer and has published a plethora of academic manuscripts, including in The New England Journal of Medicine, and has published several pieces in the general press, including Time magazine. Calhoun firmly believes that all doctors should be activists. She is currently an OpEd Project Fellow at Yale University. You can find her on Twitter at @AmandaJoyMD and on Instagram at @amandajoymd.

Do you have a compelling personal story you’d like to see published on HuffPost? Find out what we’re looking for here and send us a pitch.

I Was An ER Nurse For 10 Years. These Are The Nightmare Conditions That Made Me Quit.

I’m Black. My Son Is White. Here’s What We Deal With When We Leave The House.

I Am Living With Early Onset Dementia. This Is How My Life Has Changed.

At Least 21 Teens Died After Celebrating At A South African Tavern
Azriel Is Using Music To Find Healing, Sexual Empowerment For Herself And Other Women
Insurrectionists Fought To Hold Onto ‘Last Gasp of Whiteness’
Instagram Teams Up With The Brooklyn Museum To Honor The Legacy Of Virgil Abloh With #BlackVisionaries Program
How Fintech Company Fiserv Is Prioritizing Diversity