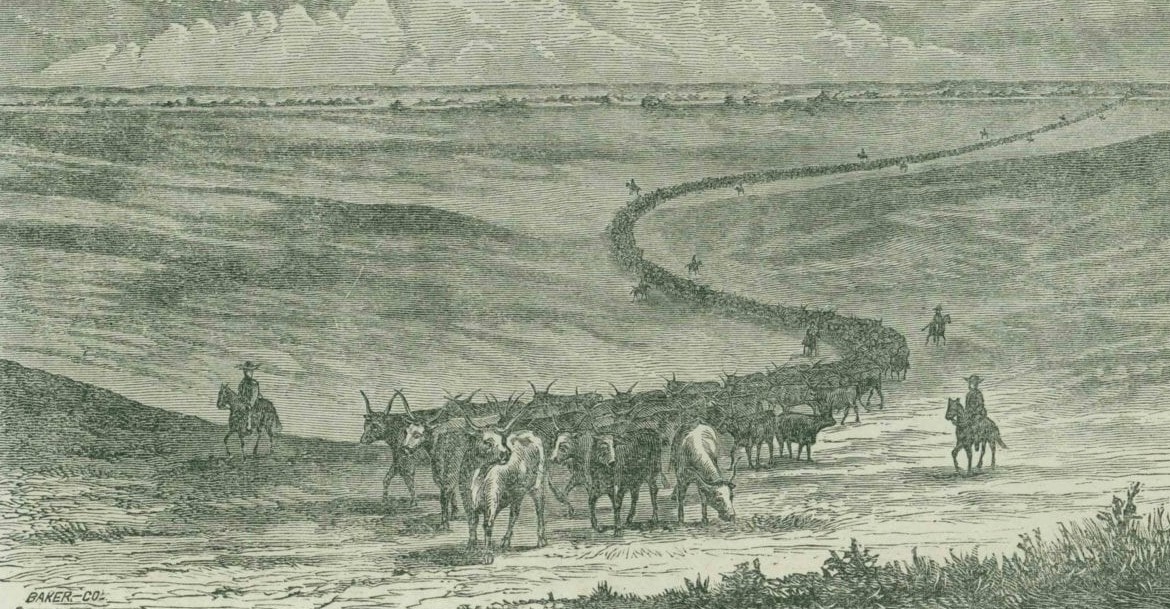 Post-Civil War cattle drives from Texas north to railroad depots in Missouri, Kansas, and Colorado were a necessary part of the American economy. In the late 19th Century. The nation’s growing demand for beef coupled with the concentration of beef cattle in Texas, led that state’s ranchers to organize cattle drives to bring herds north to railheads so they could be shipped to slaughterhouses in Chicago and other cities.

One of the first major cattle drives occurred in 1868 when Trail Boss William G. Butler drove a herd of cattle from South Texas to Abilene, Kansas with a crew of fourteen, including three Chicanos, nine whites, and two African American drovers, Levi and William Perryman. In 1874, R.F. Galbreath arrived in Kansas, leading a crew of four whites and three Blacks. Jim Ellison went up the trail in the same year with an all-Black crew. In 1885, Lytle and Stevens sent north a herd of 2,000 steers bossed by a Black Texans, Al Jones. These examples reflect the long history of African American cowboys in the Texas range cattle industry beginning in the 1850 when they were the majority of drovers in the state.

Bose Ikard, a Black drover who worked for Charles Goodnight, won the praise of his boss, one of the founders of the 2,000-mile Goodnight-Loving cattle drive trail from central Texas to Denver. Goodnight wrote of the Black cowboy, “Ikard surpassed any man I had in endurance and stamina. He was my detective, banker, and everything else in Colorado, New Mexico, and the other wild country I was in. We went through some terrible trials during those four years on the trail… He was the most skilled and trustworthy man I had.” As a lasting tribute, Goodnight constructed a tribute marker to Ikard which now stands near Weatherford, Texas.

Racial tensions sometimes arose between African American and white drovers on the trail. During an 1878 Texas to Kansas trail drive, a principal drover named Poll Allen directed Black cowboys to eat and sleep away from the rest of the crew. Yet other evidence suggests considerable camaraderie and a semblance of equality on the trail. Black and white men on trail drives faced common dangers and received equal pay for their labor. The state of Kansas had a reputation for racial toleration, and the promise of hundreds of Black cowboys spending wages in the saloons, restaurants, hotels, brothels, and other businesses along notorious Front Street encouraged social mixing in this raw new town founded in 1875. African Americans and white drovers shared hotel rooms, card games, café tables, and on occasion jail cells.

One racial incident occurred in 1876 when a hotel clerk in the Dodge House told an African American cowboy that no rooms were available. According to the hotel clerk, the African American cowboy drew out the longest barreled six-shooter that he had seen and pointed at him, telling the clerk he was a liar. The clerk fearing for his life found a suitable room for the Black cowboy.

African American cowboys were a presence and a force on the cattle drives from Texas to northern railheads from the 1860s until the railroads reached central Texas in 1885.