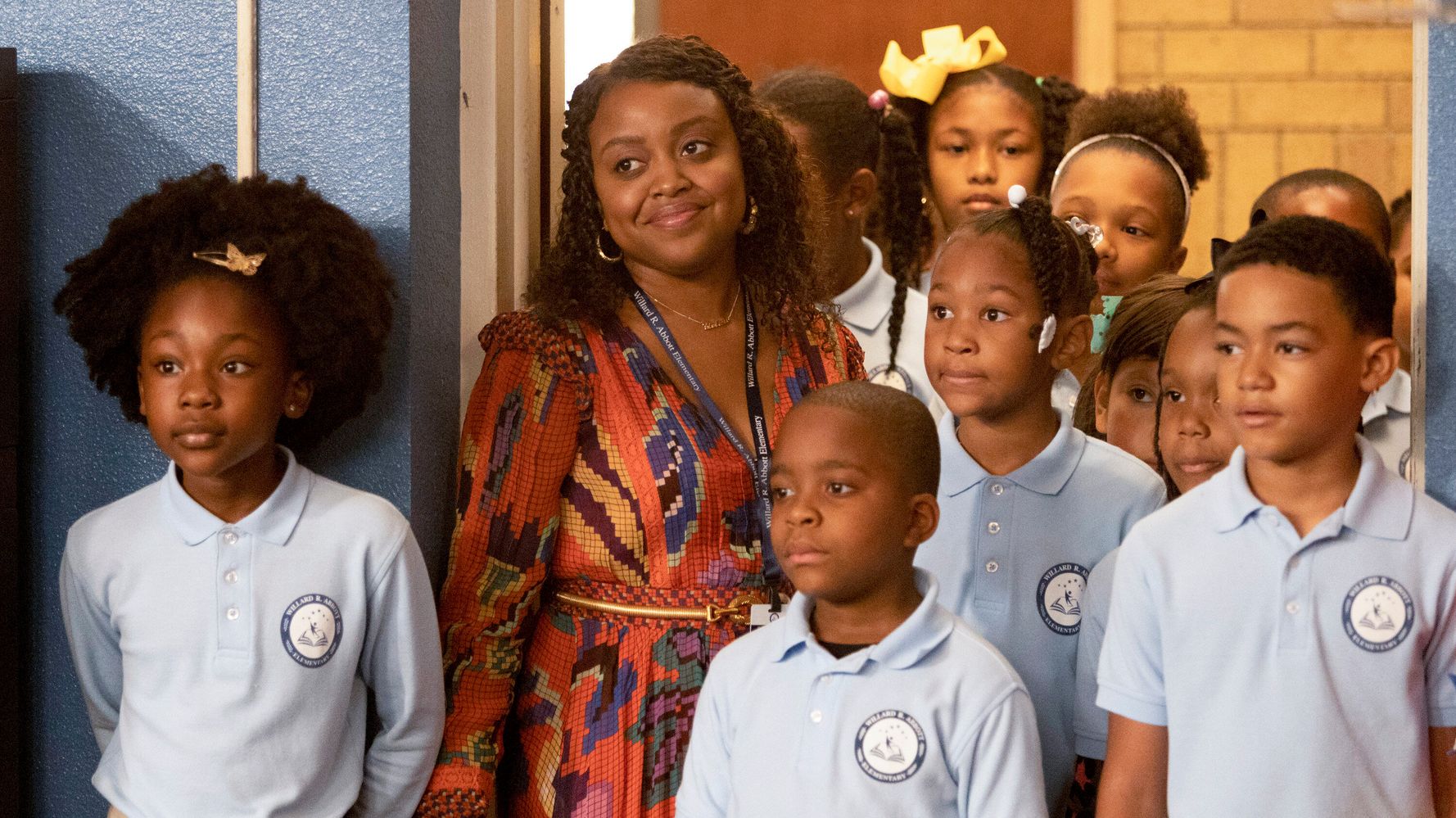 The first show Quinta Brunson pitched to ABC was not “Abbott Elementary,” the network’s latest sitcom hit. It was another workplace comedy based on her time at BuzzFeed that she pitched to multiple networks two years ago.

“I pitched it to ABC and I knew that I wasn’t going to sell it to them,” Brunson told HuffPost. “But the team of people I met there that I was pitching to, I was like, ‘I like these people, and I want to work with these people eventually. You guys get me. This is not the show for ABC Family Network, but I want to bring something here.’”

HBO Max bought it, then a year passed and the streaming giant didn’t greenlight the pilot. However, Brunson had other ideas brewing. While filming a different pilot on the Warner Bros. lot, Brunson ran into a producer she’d previously met. He informed Brunson that there was an opening for a new series and, fortunately, her schedule allowed her to be part of it.

Enter “Abbott Elementary,” which Brunson created and in which she stars as optimistic eager beaver Janine Teagues, a first-year teacher who’s trying to deliver the best education she can in an underfunded public school in West Philadelphia. Along for the ride are a few veteran educators and a seemingly self-absorbed but hilarious principal, all of whom help Teagues attempt to make the best of what they’ve been given.

With its single-camera cinematography, unforgettable one-liners and classic mockumentary stares into the camera, ABC’s newest workplace sitcom has taken audiences by storm, becoming the first ABC comedy premiere to quadruple ratings in the 18-49 demographic. Replete with “a cast of Avengers” — as co-star Tyler James Williams characterized them — Lisa Ann Walters, Sheryl Lee Ralph, and Janelle James make “Abbott Elementary” the breath of fresh air we needed on television.

“It’s super kismet,” Brunson said. “And I love network comedies. I love broad TV. I think most millennials take their stories to streaming because you get to be more raunchy there, but I enjoy making a show for families to watch around the TV, how I watched TV when I was younger. Going to ABC felt like the natural choice. It was something about the team at ABC. I was like ‘They’re gonna let me cook.’”

While the glowing reception of “Abbott Elementary,” which is halfway through its 13-episode season, has both surprised and comforted her, Brunson, 32, knew from a young age that she wanted to be in charge of her own story.

“This is right up my alley for what I thought I’d be doing,” Brunson said. “I did shy away from it a couple times, because I was fearful of trying. But ultimately, this was absolutely what I wanted to do.”

Earlier in her career, Brunson made videos for fun, which put her on a path toward becoming everyone’s favorite internet cousin. From the “People be gay” meme to “Don’t tell me to relax,” Brunson has given the internet so many gems. My personal favorite line of hers — “Oh, he got moneeeyyy!” — originates from her video series “The Girl Who Had Never Been on a Nice Date,” which Brunson said provided both her first viral video and the impetus to continue developing content.

“I just put it up to make my friends laugh, you know, there was no need or want for it to get big or anything like that,” she said. “That just happened to happen. I’ve had the opportunity to serialize it and I guess from that point on, I knew I could kind of create stuff for the internet. At that point, it became apparent that I had some type of skill for doing that.”

But Brunson wasn’t making any money. She needed a stable, 9-5 job when she wasn’t doing stand-up. Then her friend Justin Tan, who was a BuzzFeed employee at the time, asked her to make a cameo in a sketch. (BuzzFeed is HuffPost’s parent company.)

Before her time at BuzzFeed, before her bestselling book “She Memes Well,” and before Hollywood, Brunson was an advertising student at Temple University. In 2011, Brunson took her first break from undergrad and realized that she wanted to head to L.A. and see what the city was like. She lived on her friend’s floor for three months, took improv classes, began working as a production assistant, and later returned to Philadelphia. There, she devised a master plan: transfer to UCLA.

We’re proud of former Owl, @quintabrunson, for capturing the heart and grit of the Philly spirit in the ABC sitcom ‘Abbott Elementary.’ #OwlsAreEverywhere https://t.co/a17JjeZzb4

Against her mother’s wishes, she never returned to finish school. Instead, Brunson juggled different jobs until landing the role at BuzzFeed, from working at Apple’s Genius Bar to being an assistant to Samira Nasr, who later became the first Black editor-in-chief of Harper’s Bazaar.

Brunson’s mother told The New York Times that she was initially disappointed with her daughter’s decision, but she understood that Brunson “always had this strong determination” and marched to the beat of her own drum. A surprise baby and the youngest of five siblings, Brunson “argued a lot” with her closest brother, who is 8 years older than her.

“​​He was the baby for so long, then I came along. We basically shared what we had called Jack and Jill bedrooms that share doors, so I just had direct access to get on his nerves,” laughed Brunson.

Yet at the same time, she said she learned so much from her brother and adopted his love of comedy. Brunson remembers watching “Ace Ventura: Pet Detective” and “Martin” alongside him as a kid and cites Niecy Nash, Aisha Tyler and Sherri Shepherd as some of her favorite comedians. But she gleans the most inspiration from Wanda Sykes’s comedic career.

“She had a network sitcom that was very big in my house, and I just really looked up to her. It was like, ‘She’s tight. She has a show.’ It was in the same way ‘Seinfeld’ had a show, and it was just in the vein of another comedian,” said Brunson. “Because of that, she was really valuable to me and Wanda Sykes has since been so supportive. I met her a long time ago … and that’s why I made sure, in the conversations I’ve had with her, I let her know how impactful she’s been on my life.”

“It’s not like I have them in a separate ‘Black woman’ category,” said Brunson of the Black woman comedians she looks up to. “For me, it goes from Will Ferrell to Wanda Sykes to Seth Rogen to Niecy Nash. They’re all in the same category to me, which should be the end game of representation. They’re just there, they always have been, and that’s how I’ve always looked at comedy. Mindy Kaling is another one. People are like, ‘Oh, she’s a great Indian American —’ no, she’s a great writer. Period.”

Speaking of Kaling, who rose to prominence as Kelly Kapoor in “The Office,” as “Abbott Elementary” ascends in popularity, comparisons to the legendary NBC series continue to grow, to which Brunson said, “If people are saying that in good faith, that’s great!”

Those comments don’t bother her at all; Brunson said she understands that viewers often need a reference point in popular culture. But at the end of the day, her goal was not to make a Black version of “The Office.” The goal was to make a sitcom, she said.

“This is the way I look at it: ‘Abbott Elementary,’ at the end of the day, is a workplace comedy,” Brunson said. “So is ‘Superstore,’ so is ‘Spin City,’ so is ‘Scrubs.’ Then, you have mockumentaries: ‘Parks & Recreation,’ ‘What We Do In The Shadows,’ then the British version of ‘The Office.’ This is just another in a line of mockumentary-style workplace sitcoms. This, at its root, is just another TV show.”

But “audience perception is the way the game goes,” she added, acknowledging that “you make a piece of art, and people get to look at it and make their own decision” about how they perceive it.

“Abbott Elementary” is also an unabashed homage to West Philadelphia and the people that made Brunson who she is. From incorporating Philly slang like “jawn” and “boul” to naming the series after her sixth grade teacher, Brunson is intentional in what the series depicts about the city.

Brunson has long been involved in direct action efforts within the city, especially regarding anti-gun violence activism. In that vein, ABC presented Brunson with the idea of sending supplies to school teachers across the nation via an “Abbott Elementary School” bus.

if you see this bus in your city, it means some teachers about to get some free supplies and #AbbottElementary gifts 😤❤️ https://t.co/CpOZRIRIlP

“I just wanted to make sure whatever we’re doing is going directly to the schools and directly to teachers. I really didn’t want to deal with a bunch of middlemen, and I didn’t want to go through the city of Philadelphia, because I just knew that would make the process longer,” Brunson said. “I wanted to get stuff to people immediately. Then we also partnered with Scholastic to do a book drive at various schools, and now that we’ve done Philly, New Jersey, Delaware and New York, now we’ll be moving throughout the country.”

Understanding the power of entertainment and television, Brunson hopes that a positive reflection of real people and real life in Philadelphia will impact those that live there. Rather than reflecting the city’s negatives, she hopes “Abbott Elementary” will help spark change in how Philadelphia residents see themselves.

“I don’t think every story I’ll continue to tell will always take place in Philly, but for now, this story requires Philly,” she said. “I’ve been out in L.A. for almost 10 years now and while being out here, my appreciation for home only grew more. I’m happy that ‘Abbott’ is this space where I can showcase what’s special to me about Philly.”

Trevor Noah Reveals His Exit Announcement Was A Total Shock, Even To His Own Team
Missed AfroTech Conference In Austin, TX? These 20 Recap Videos Will Send Your FOMO Into Overdrive
5 Reasons Why The Georgia Senate Runoff Remains Extremely Important
4 Things To Know About Zaza, August Alsina’s Rumored Boyfriend
Grand Jury Indicts White Men Accused Of Firing At Black FedEx Driver In Mississippi