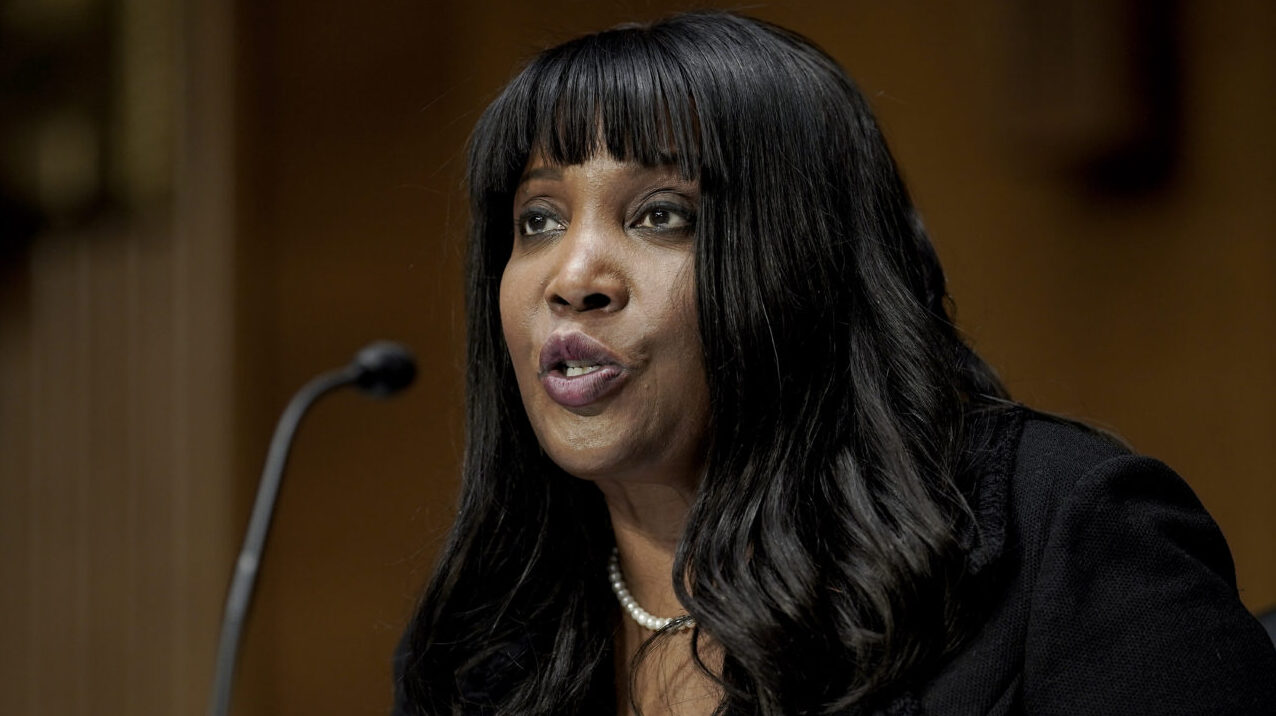 Dr. Lisa DeNell Cook, of Michigan, to be a Member of the Board of Governors of the Federal Reserve System, speaks before a Senate Banking, Housing and Urban Affairs Committee confirmation hearing on Capitol Hill on February 3, 2022 in Washington, DC. (Photo by Ken Cedeno-Pool/Getty Images)

President Joe Biden has tapped a series of Black women for historic roles throughout the federal government, and among them is a coveted seat on the financial governing board of the Federal Reserve.

Lisa Cook is the first Black woman to receive a nomination to the Fed, but she will be among the many Black women grilled by Senators as she seeks confirmation.

Two Black nominees are up for confirmation from the Senate — Cook and Philip Jefferson. But of the two, Cook seems to have drawn the attention of the opposition from the right side of the political aisle. In a Senate Committee on Banking, Housing, and Urban Affairs on Thursday, Republicans drilled down on the legitimacy of Cook’s resume.

Supporters of Cook point out that she is more than qualified to be nominated and confirmed, but contend the backlash she is receiving from conservatives is merely rooted in racism. One instance that highlighted this claim occurred during senators’ questioning.

“You’ve made several mischaracterizations of your background,” Republican Senator Bill Hagerty of Tennessee said. “If I look at your list of publications and your speeches, it seems more like social science than it does economics and monetary policy.”

“I specialize in managing financial crises, and I’ve done that in several instances. At the Treasury Department, I was at the financial crisis think tank and worked closely with John Taylor [and] Secretary Summers,” Cook responded. “I have publications that are related to banking reform, and recognizing systemic risk. So I take the research that I do and I turn it into something in the field.”

Since 2006, when ​​Roger Ferguson resigned, a Black person has not held a position on the Federal Reserve Board. At one time, Ferguson was even the highest-ranking Fed official in Washington. But since his departure, the absence of a member of the Black community with a say on monetary policy has been challenged through the years by Morial and the nation’s leading collective of Black economists and business professionals.

“With no voice for the Black community, the issues of Black unemployment, the issues of lack of the housing gap were not properly elevated in the discussion post-recession,” Morial explained. “It was a miss for there not to have been an African American appointed in the Obama years to the Federal Reserve Board of Governors.”

The Black Economic Alliance is confident that Cook and Dr. Jefferson will fill a 16-year gap by outlining the relationship of monetary policy and its impacts on the Black community to fellow board governors.

“The U.S. Senate has the opportunity to make history by confirming Dr. Lisa Cook and Dr. Philip Jefferson to serve as Governors on the Federal Reserve Board of Governors,” the Black Economic Alliance declared in a statement. “The U.S. Senate can help ensure that the leadership table of our nation’s central bank and preeminent financial regulatory authority includes input from a vast set of lived and professional experience that is directly relevant to the most urgent problems the U.S. financial system and labor market face.”

Cook is a Spelman College alumna with a Ph.D in economics from the University of California, Berkeley, and tenured professor of economics and international relations at Michigan State University. In addition to her academic background, she serves on the Board of Directors of the Federal Home Loan Bank of Indianapolis and the Board of the Federal Reserve Bank of Chicago.

Despite skepticism from Republicans, Cook has a groundswell of support and the backing of the committee chairman.

Senate Banking Chairman Sherrod Brown said, “Dr. Lisa Cook has decades of hands-on experience as an economist, including advising Administrations on both sides of the aisle. She understands how the lack of financial services for millions of Americans hurts the entire economy and that more innovation will make our economy stronger for everyone,”

Tenoch Huerta Reveals The Truth About His Missing Bulge In ‘Wakanda Forever’ Final Cut
Here Are The Top 5 Political Themes Found In ‘Wakanda Forever’
Ashanti Reveals She ‘Made Some Calls’ To Get Retaliation Against Man Who Abused Her Little Sister
Trevor Noah Reveals His Exit Announcement Was A Total Shock, Even To His Own Team
Jeezy Addresses Fallout With Freddie Gibbs