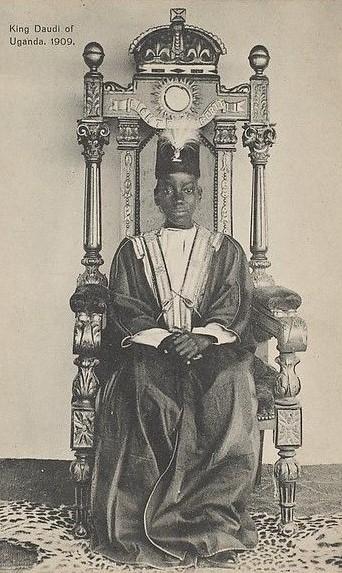 Africa’s youngest king, or so he is called, was born Ssekabaka Daudi Chwa II, or King Daudi, on August 8, 1896, in Mengo Hill to the last independent ruler of Buganda, Kabaka Danieri Basammula-Ekkere Mwanga II and his wife, Evaliini Kulabako of the Ngabi clan. Daudi entered the world during the early days of British colonization in Buganda when European imperialism threatened African traditions, lifestyles, religious practices, and freedom.

After Mwanga II led a rebellion against British colonial forces in 1897, he was forced to flee and died shortly thereafter in Victoria, Seychilles. Upon his death, Daudi Chwaa II assumed the throne in August of 1897, as a 1-year-old. His young age at the time of his coronation necessitated the constant authority of regents to govern on his behalf, which included prime ministers Apollo Kaggwa, Tefero Kisosonkoke, Nsibirwa, and Samual Sebagereka. Although Daudi inherited religious upheavals and colonial oppression, his experience would differ greatly from his father’s: the young ruler would never know a life free of land untouched by colonial control.

King Daudi reached adolescence in the palace constructed for his father at Mengo Hill in Kampala, where monarchs of the Kingdom of Buganda had ruled for centuries. During this time, he received an education from Kings College Buddo, which remains open as a secondary school as of 2022.

When he turned 18 years old in August 1914, he was finally able to assume full responsibilities of kabaka (king). Three days later, the British Army granted him lieutenant status which he held for three years until September 22, 1917, when he was appointed an honorary captain for the British Army. The following year he was awarded the title of Commander of the Order of the Crown of Belgium. On February 16, 1925, Daudi was promoted to Knight Commander and was later awarded an additional honorary title of Knight Commander of the Order of the British Empire in 1937. Most accounts describe him as a “fair, responsible, and pragmatic” king. The titles received from the British make him the most decorated Bugandan king, albeit they were awarded by colonial overlords who actually ruled what was now the British colony of Uganda. Little has been recorded regarding his personal feelings towards the British during his rule.

Over the course of his life, King Daudi had seventeen wives with whom he fathered thirty-six children: sixteen daughters and twenty sons. He died in his palace at Salaama in Kampala at the age of 43 on November 22, 1939. He was buried in the Royal tombs at Kasubi-Nabulagala with Buganda’s two previous rulers. His son, Edward Muteesa, succeeded him and reigned until his exile in 1955, where he remained until Uganda’s independence in 1962. He then returned to become the first President of Uganda post-independence.

How Stylist Alexander-Julian Gibbson Problem-Solves For Stars Like Lucky Daye
Teodoro Obiang, World’s Longest-Serving President, Extends His 43-Year Rule And Sets Up Son To Succeed Him
4 Things To Know About Zaza, August Alsina’s Rumored Boyfriend
Jeezy Addresses Fallout With Freddie Gibbs
After A Year, Miami Man Is Arrested For Murder Of Woman Who Attempted To Catch Him With Stripper