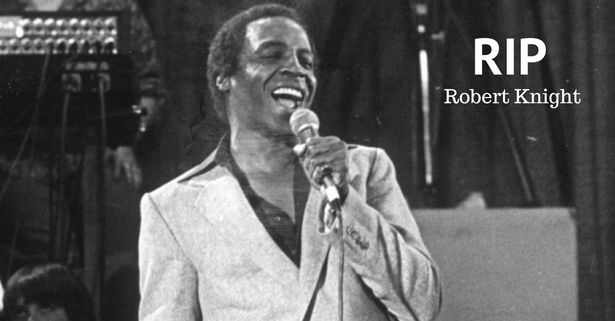 Robert Knight was born Robert Henry Peebles on April 24, 1945 in Franklin, Tennessee. Knight made his professional vocal debut with the Paramounts, a racially integrated doo-wop quintet during the Civil Rights era comprised of friends at the all-black Natchez High School and all-white Franklin High School. They signed with Dot Records in 1960 and released the single, a minor hit titled “Free Me” in 1961.

Knight continued performing with the Paramounts during his high school years. However, after the group disbanded, Knight concentrated on his academics and graduated from Natchez High School. He enrolled in Tennessee State University in Nashville in 1963 and received a Bachelor of Science degree in chemistry in 1967. During his tenure at TSU, he sang with the a cappella doo-wop vocal trio called the Fairlanes.

In 1967, Knight’s first single was a country soul hit coming out of Nashville titled “Everlasting Love” on the Rising Sons label. It successfully peaked at no. 13 on the Billboard Hot 100 chart and no. 14 on the Billboard R&B chart. It also rose to no. 26 in Canada, and no. 40 in the UK. The song, however, remained on the charts far longer outside the U.S.

In 1968, Knight’s compositions “Blessed Are The Lonely,” and “Isn’t It Lonely Together,” both reached no. 97 on the Billboard Hot 100. The latter single peaked at no. 85 on the Canadian Single chart. In 1973, his recording “Love on a Mountain Top” reached no.10 on the Billboard Hot 100 and in the following year, 1974, it was re-released and made it to no. 19 UK. “Love on a Mountain Top” was the last record released by Robert Knight.

After leaving the music industry as a performer, Knight worked in several capacities to earn a living. This included employment as a chemical lab technician, a chemistry teacher, and a grounds crew member, all on the campus of Vanderbilt University in Nashville, Tennessee.

In 2004, Knight was featured in the Country Music Hall of Fame and Museum’s exhibit “Night Train to Nashville: Music City Rhythm and Blues.” In 2014, Knight performed for the Baby Boomer Legends benefit concert at the Franklin Theatre in the historic district of Franklin, Tennessee.

Robert Knight, often categorized as a one-hit-wonder, died on November 5, 2017, in Nashville, Tennessee. He was 72. None of his recordings were as successful as “Everlasting Love,” his only top 40 hit.