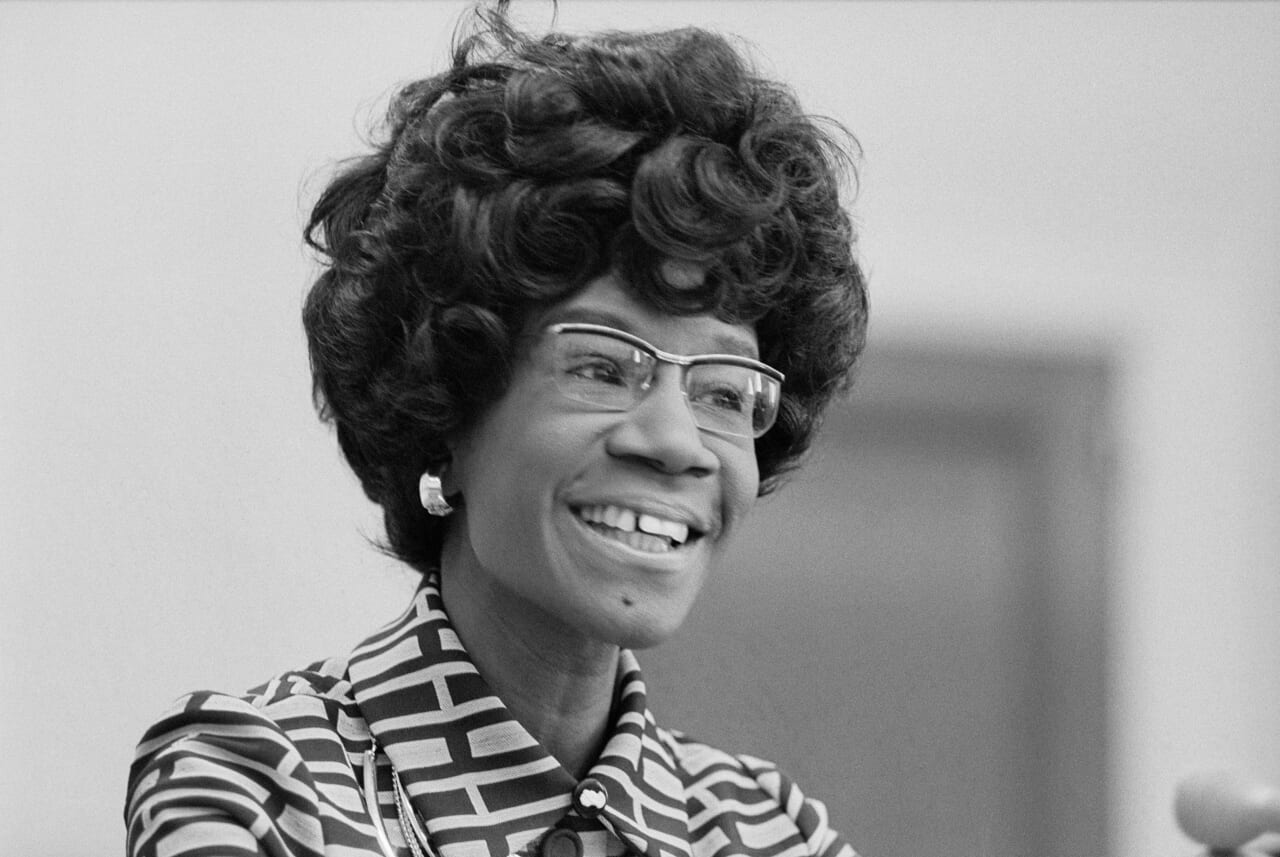 After insurrectionists stormed the U.S. Capitol building on Jan. 6, 2021, destroying anything they could get their hands on, including desecrating a memorial placard of civil rights icon U.S. Congressman John R. Lewis, there was one historic structure that was left unscathed.

It was a portrait of former U.S. Congresswoman Shirley Chisholm, the nation’s first woman — and Black woman — from the Democratic Party to run for U.S. president in 1972.

The painting by Kadir Nelson of the late U.S. representative, who was also the first Black woman elected to the United States Congress, portrays a bold and unapologetic Chisholm with her arms folded as she towers over the Capitol building. That illustrious artwork of the former Congresswoman stared down the mostly white insurrectionists as they tried unsuccessfully to overturn the certification of the 2020 presidential election.

U.S. Congresswoman Barbara Lee of California and Congressman Hakeem Jeffries of New York confirmed to theGrio that the portrait was spared by the insurrectionists. Lee is credited with having the portrait placed inside the Capitol and Jeffries happens to be sitting in the very congressional seat Chisholm once held.

For decades, Chisholm’s political grit and history-making presidential campaign – launched 50 years ago on Jan. 25 – has served as an inspiration to Black women in politics. Her boldness and transformational integrity transcended her 5-foot-2 petite frame.

Chisholm’s likeness has graced the walls of many homes across the nation, including that of Tiffany Cross, host of the MSNBC’s The Cross Connection. Cross’s portrait boasts a vivid portrayal of Chisholm by artist Shawn Perkins.

“Shirley Chisholm was a pioneer with the tenacity to be her authentic self. She faced many enemies and a system that routinely denied her. She famously said ‘If they don’t give you a seat at the table, bring a folding chair,’” Cross exclusively told theGrio.

“I’ve always loved that. But I take her message a step further–if they don’t give you a seat at the table, build your own. And make it big and welcoming.

“Soon enough, their table becomes irrelevant,” added Cross, who is one of a growing number of Black women in cable news covering politics. “I wish she could see this space now.”

But while Shirley Chisholm is praised today for her courageous run for president, inspiring generations of women and Black politicians who came behind her, she faced an uphill battle of sexism and racism.

Shola Lynch, director of Chisholm ’72 – Unbought & Unbossed, a 2004 documentary film on Chisholm’s life, noted that when the announcement of her run aired on national news, broadcast journalist Walter Cronkite infamously quipped, “A new hat — rather, a bonnet — was tossed into the presidential race today.” The comment seemingly placed Chisholm behind the number of white men vying for the highest office in the land.

“Despite the outside world’s low expectations of her as a Black woman, she never limited herself,” Lynch told theGrio. “One of the things Octavia Butler says in the film is I’d like to think it’s not as though she wasn’t afraid. But she was afraid and did it anyway.”

Chisholm, whose congressional district represented the Bedford-Stuyvesant neighborhood of Brooklyn, New York, faced questions from her initial announcement from a cadre of people, including friends and supporters.

Former U.S. Congressman Edolphus Towns, who Chisholm endorsed to take her seat in Washington in 1983, was relied on heavily by Chisholm for advice. He remembers the day she decided to run for office.

“We tried to talk her out of that. We said, ‘Shirley you know, running for president means you got to have all 50 states. That’s just not even New York state,” Towns recalled to theGrio. “She said, ‘I know that and I have people in certain states that are just waiting for me to make my announcement and I’m going to make the announcement.’” 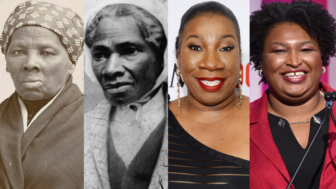 The run for president wasn’t easy and came just four years after the assassination of Dr. Martin Luther King Jr.

Towns remembered also reminding Chisholm of how costly a presidential campaign would be. “She said, ‘That’s all you guys talk about is resources and money. All you have to do is have the people. If you have the people, you’d be able to achieve and accomplish your goal.’”

Early on in the campaign, even as the odds were against her, there were believers like a young Al Sharpton and a young Barbara Lee, who both worked on Chisholm’s campaign. Her staffers did not necessarily have official titles, however, they fit where they could get in. They supported the campaign as Chisholm’s platform was, as they saw it, about The People.

Chisholm raised money in spite of not having the financial bandwidth. She even maxed out her amex card, according filmmaker Lynch.

Congresswoman Lee recalled, “She said she didn’t have a lot of money. She couldn’t run a national campaign. So I ended up raising money for her. We had events at nightclubs and we had events at venues that you would never think a presidential candidate would have an event at.”

Many community activists got a chance to meet with the presidential candidate who, at times, traveled only with the Secret Service on the campaign due to money restrictions.

Lee, who worked as the Oakland, California Chisholm Campaign director said, “I had the Black Panther Party, Huey Newton, come to Los Angeles to Diane Carroll‘s house with me, where [she] was the special guest to meet Shirley Chisholm.

Chisholm laid the groundwork from state lawmaker, to U.S. congresswoman to presidential candidate to be part of the solution for issues facing Black America and women. She predated Vice President Kamala Harris’s historic rise to The White House, and that of Georgia gubernatorial candidate Stacey Abrams, whose grassroots voter advocacy work helped turn the red state blue.

Chisholm also arguably gave rise to former President Barack Obama and Secretary of State Hillary Clinton‘s then-historic campaign for the Oval Office, and she was the original progressive before “The Squad” and U.S. Congresswoman Alexandria Ocasio-Cortez (AOC).

Barbara Bullard, president of the Shirley Chisholm Cultural Institute, told theGrio, “While Shirley gave a rousing speech for the Equal Rights Amendment, and she would speak about that in her presidential race, this was not the only reason she ran.”

“She was attempting to end the War in Vietnam, to fight for homosexual rights as one of the first politicians to speak on behalf of the LGBTQ community of the time, and to get better opportunities for people of color,” said Bullard.

“Shirley addressed the need to show full federal support to scientists working to save our environment, and to stop the destruction of our national forests and national resources.”

Adding, “Shirley also addressed gun control, as she feared that America was teaching children, through the Vietnam War, that the only way to solve society’s problems was through the gun and not the ballot.”

In Congress, Chisholm, a trailblazing political icon, introduced 50 pieces of legislation that addressed racial and gender equality and championed the poor. While on the Hill, she garnered the moniker “Fighting Shirley.” Chisholm’s push for progress also manifested itself in her co-founding of the National Women’s Political Caucus in 1971, which was the precursor to her run for president.

As Chisholm was a huge advocate for Black America, she also shocked many supporters after she visited racist presidential candidate George Wallace in the hospital after he was shot while campaigning in Maryland. She decided to visit the wounded Wallace because she believed it was the right thing to do. She also kept the continuity of other presidential candidates who took the trip to visit Wallace.

Congresswoman Lee vividly remembered the dust up over Chisholm’s decision to visit Wallace.

“When George Wallace was shot during her campaign, she suspended it for a week or a few days, and I was furious. I was going to say, forget it. She disappointed me when I saw that racist segregationist in the hospital. There is no way,” said Lee.

“She took me to task about that and told me that you never know. She said, ‘That’s the human thing to do. You can’t let politics take over so much that you forget that you’re a human being.’”

Though Chisholm’s bid for president was ultimately unsuccessful, her boldness to even think the possibility could become a reality is what made her remarkable to many who were of her time and generations to come.

In a February 2019 interview with theGrio, Vice President Kamala Harris described  Chisholm as someone who was both powerful and courageous.

“She reminds me of the many sayings of my mother and that is, ‘Don’t let anybody tell you who you are. You tell them who you are.’ That was Shirely Chisholm, unbought and unbossed. I stand as so many of us do on her shoulders,” said then-U.S. Senator Harris, who had just launched her own bid for president.

At the U.S. House of Representatives, where Chisholm served in congress from 1969 to 1983, the Congressional Black Caucus is planning to kick off Black History Month in homage to the greatness of Shirley Chisholm with a special order hour. The effort to honor the political giant, led by Congresswoman Lee, is expected to be a year-long celebration of her life and work.

“It’s going to be awesome,” said Lee. “People will never forget Shirley Chisholm after this.”