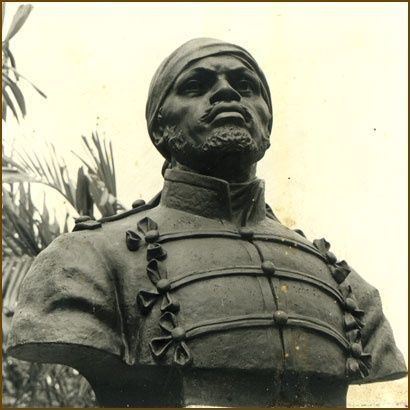 Pedro Camejo also known as Negro Primero (The First Black in Spanish) was a Venezuelan soldier who fought with the Royal Army and then the Rebel Army during the Venezuelan War of Independence between 1810 and 1823. He was the only officer of African descent who was with the army of Simon Bolivar. Camejo was born enslaved on March 30, 1790, in San Juan de Payara, Captaincy General of Venezuela, Spanish Empire (Now Venezuela), the property of a Spanish royalist Vincente Alonzo, a landowner. Alonzo put Camejo into military service for the king of Spain Ferdinand VII. Camejo fought for Spain when the Venezuelan War of Independence began.

Camejo’s loyalty shift from the Spanish Royalists to the Patriots after the battle of Araure on December 5, 1813. In that battle, an army led by Simon Bolivar captured more than 3,000 Spanish royalist troops. Impressed by Bolivar and the Patriot performance, Camejo hoped a peace treaty could end the conflict but fled with another soldier as the battle continued. He stay hidden for a time in the state of Apure until he later discovered that fighting for the Patriots could lead to the emancipation of Afro-Venezuelan slaves. In 1816, Camejo came before General Jose Antonio Paez, who fought with Bolivar. Patriot soldiers advised Paez to bring Camejo in the Patriot army since they were already familiar with his bravery and skill in battle. Camejo was accepted into the army and fought under Paez.

Camejo fought for the Patriots in the battles of Santo Domingo, Chorrera, Cople, Mision de Abajo, Oriosa, Sombrero, San Fernando, Rincon de los Taros, Pedraza, Mamon, and Barinas. On April 2, 1819, Camejo participated in the battle of Las Quesearas del Medio. During that battle, 150 lancers led by Paez, including Camejo, defeated a battalion of artillery, infantry, and cavalry made up of 1,200 men under Spanish field marshal Pablo Morillo. The following day, Bolivar decorated Camejo with the Orden de Los Libertadores de Venezuela (Order of Venezuelan Liberators) and dedicated a proclamation to the battle’s heroes called “A Los Bravos del ejercito de Apure (To the Brave Men of the Apure Army) published on April 24, 1819, in El Correo del Orinoco, the principal newspaper of the Venezuelan Republic.

Tyre Nichols Remembered As Beautiful Soul With Creative Eye
Inside The Online Community Where Home-Schoolers Learn How To Turn Their Kids Into ‘Wonderful Nazis’
Biden Administration Seeking To Change Census Rules To Identify Latino/Hispanic As A Race Instead Of Ethnicity, Which May Prove Problematic
D.C. Vigilante Who Killed 13-Year-Old Karon Blake Has Been Charged With Second-Degree Murder
Republicans Rip Biden Court Pick For Bungling Questions On Constitution