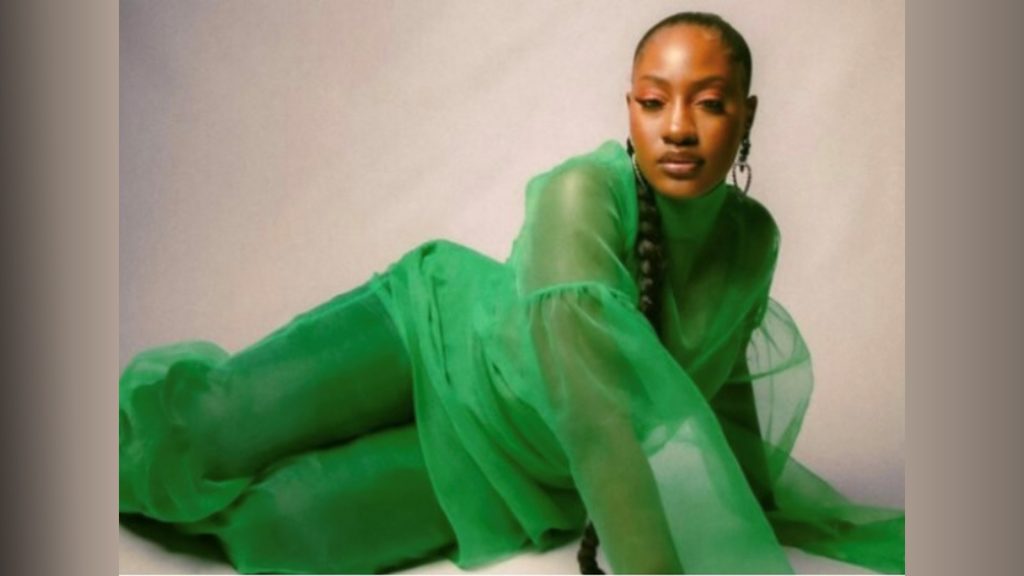 Alot has happened to Tems over the past 12 months. Barack Obama picked Essence, the hit
Wizkid track on which she features, as one of his favourite songs of the year. Justin Bieber remixed the single, and Drake asked her to contribute vocals on a song from his chart-topping album Certified Lover Boy. A clip surfaced online of Rihanna fangirling with joy on meeting her at the Savage x Fenty show. She made it on to the BBC Sound of Music 2022 longlist, embarked on her first solo tour, was nominated for a Mobo, and then a Grammy for best global music performance . Oh, and Adele became her music fairy godmother.

So a lot to take in. Are you knackered, Tems? “I am, yes, but I’m trying to enjoy it.” The 26-year-old Nigerian was on a photoshoot when she found out about the Grammy nomination last month. “Four of my guys picked me up and started bouncing me around,” she says. “But we didn’t really do anything afterwards because we had to work, so we went home to rest, thank God.”

We meet in a hotel in east London while she is in town for a handful of (sold out) solo gigs. Wrapped up in a North Face puffer, she does seem knackered, but thoughtful and introspective too. “I wasn’t going after awards, it wasn’t like anything I had on a list to achieve,” she says. “I’m still not trying — there’s no benchmark that I’m trying to get to. I really just want to become more of who I actually am.”

In a recent interview with Rolling Stone, Adele said she had been a fan since the beginning of Tems’s career in 2018. A friend had played her Tems’s debut track, Mr Rebel — which at the time was mainly a hit in the alté music scene in Nigeria — and Adele reached out shortly afterwards. They went for dinner in LA, she made the introduction to Drake and even played Tems her 30 album before it was released. Was it for feedback? “No, I don’t think Adele needs my opinion!” she laughs. “But I think she just wants to share her music with the people that love her, and I was honoured to have her share that with me, that was very special.” Tems confirms what we all know: “She’s so much fun. She’s vibes, so much vibes.”

Born Temilade Openiyi in Lagos, Nigeria, Tems was working as a marketing executive until three years ago. Growing up she had always loved to sing and would write and record songs as voice notes on her phone. When she eventually took the plunge and quit the office job to pursue music professionally, she says: “I didn’t have a strategy to support myself, I was just living it day by day.” She recorded Mr Rebel at a studio that belonged to an acquaintance, taught herself music production from YouTube, and put together the single’s artwork with her photographer cousin and a graphic designer friend. The internet loved it, and it caught the eye of her first manager; the single now has more than three million streams on Spotify.

Tems joins a new generation of young female artists who are all taking ownership of their music from an early stage. Although she makes clear: “My reality is very different. I’m a Nigerian girl and that’s a third world country. We’re too busy trying to survive to think about the music industry. No one took me seriously [at the beginning] and I was like, yeah, looks like I have to do it myself!”

Tems has one older brother, and the family briefly lived in King’s Cross when she was a baby (her dad is British-Nigerian), before settling in Lagos after her parents’ divorce. She studied economics at university in South Africa — she says she still follows what’s going on in the markets — but her passion was always music. “I would literally be in class and burst out singing. People would tell me to shut up all the time: ‘Why are you always singing, your voice is not nice blah-blah-blah,’ ” she laughs.

Her music has been praised for blurring the lines between soul, reggae, R&B and contemporary Afrobeats, and also for her confessional style of lyrics that talk about new love, heartbreak and depression. “Music is replenishing for me, it’s how I put my thoughts down. It’s like my diary.” Her influences span from emo bands such as Green Day and Paramore to Aaliyah, Lil Wayne and Frank Ocean.

She will be back in the UK for more gigs in May and June next year, and has just been announced on the line up for Somerset House’s Summer Series in July. But now some rest is on the cards. “I’m going to get a break — not stopping or pausing but resting, like a period where I can just chill. I’m only human,” she says. “But it doesn’t mean in that rest that I won’t make music …”

Which Disney Prince Is True Boyfriend Material?
‘Love & Hip Hop Hollywood’ Star Miss Nikki Baby Confirms She Is Dating A MUCH Younger LiAngelo Ball
#Turk Talks Catching An STD With #LilWayne
Brittney Griner Gets No Kind Words From Former Coach During Press Conference
10 Reminders As To Why Trina Remains ‘The Baddest Chick’