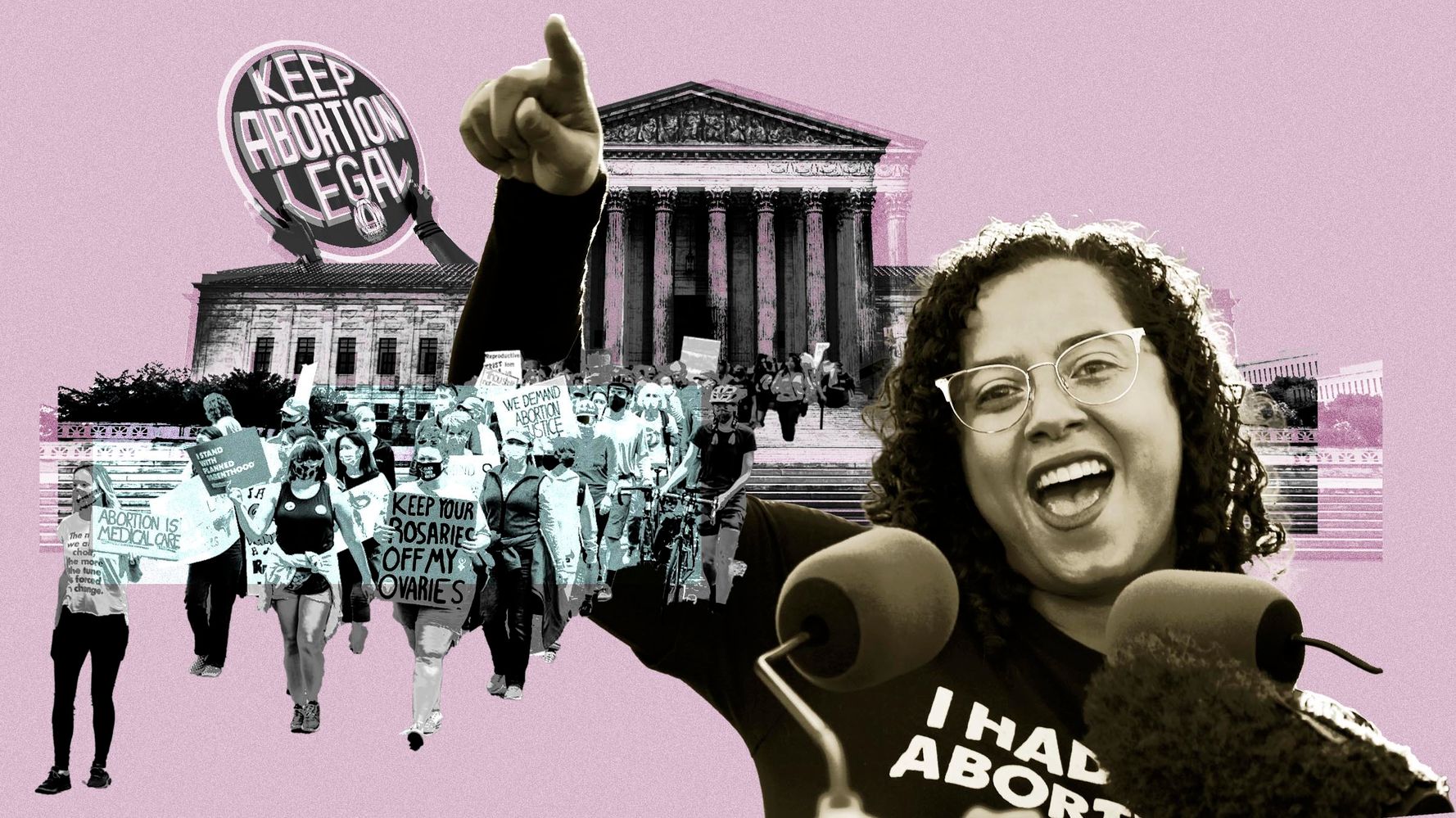 Renee Bracey Sheman is unapologetic about her abortion. And she thinks everyone else should be, too.

The activist and author was 19 when she got an abortion. Little did she know at the time that her experience would lead to a decades-spanning career in reproductive justice work. As the founder and executive director of We Testify, Bracey Sherman has made it her life’s work to help other people tell their abortion stories, with a focus on the intersections of race, class and gender, as a way to eliminate stigma around the procedure.

But Bracey Sherman wasn’t always so self-assured. She found herself in this work because she initially didn’t tell anyone about her abortion ― unable to shake feelings of shame and stigma even though she wasn’t quite sure where they were coming from.

“I kept it a secret because even though I grew up in a family that was super pro-choice, I felt like they would be disappointed,” Bracey Sherman told HuffPost earlier this month.

“I was having complicated feelings around my abortion because I felt guilty for not feeling guilty, because the rhetoric around having an abortion is that it’s incredibly tough,” she said. “You often hear ‘It’s the hardest decision you’ll ever make in your life,’ and all of this stuff. Which, for some people, it is, but for the vast majority it’s actually: ‘No, I know what I need to do.’”

As a biracial Black woman, Bracey Sherman struggled to see herself reflected in the people who talked about reproductive rights in the media. It was always white, cisgender people, and no one ever actually talked about having an abortion, she recalled. It later blew her mind when she learned that the majority of people who have abortions are people of color. How do we change this perception to reflect reality? she thought.

“By showing and giving a platform to more folks of color, you’re going to end up with people like 19-year-old Renee right before or after her abortion saying, ‘Oh, I do fit in here somewhere. This is for me, and there is someone who looks like me,’” Bracey Sherman said.

HuffPost spoke with Bracey Sherman about the power of abortion storytelling, the misogynist and racist roots of the anti-abortion movement, and what’s next as we head into 2022, the year that could very well see the fall of abortion rights in the U.S.

As someone who is so unapologetic about her abortion now, it’s hard to picture you keeping your abortion a secret. Can you talk to me about what those first few years were like after your abortion? What prompted you to start talking about it?

I just didn’t feel comfortable dealing with telling my family. That stigma and shame, I felt it a lot, and that was hard.

At the time, in my early 20s, I was working with queer and trans youth to share their stories with legislators and the public in order to change laws and educate. As a straight cis woman, I felt like, ”I don’t know if this is right, me asking young people to share their stories as queer and trans youth and I’m keeping this big secret myself.” But then I started to meet other people who did abortion storytelling work. That feeling of sharing your abortion story and somebody saying “I had an abortion” back ― that feeling was exhilarating. I wanted to bottle it up and feel it forever, because I felt this weight being lifted off of my shoulders.

It was one of the first decisions I made as an adult where I felt like, “Oh, I can take control.” I’ve always wondered, how do we make that not just something that I experience, but that everyone experiences? How do we change the culture around talking about abortion so that people who have abortions are met with nothing but love and support and kindness?

I’m assuming you ended up telling your family about your abortion?

I did. I told my mom first, and the weight of having her love me and say “You made the best decision for you and I love you” ― my dad was also very loving and supportive. Again, how do you bottle that up and make that something everyone can feel and experience when going through an abortion?

Recently, at the rally we hosted outside of the Supreme Court ahead of oral arguments [in Dobbs v. Jackson Women’s Health Organization], the anti-abortion protesters were screaming really nasty things at us: “You wicked women!” “Whores!” And this one, they say this to me all the time: “What if your mom had had an abortion?” But the thing is, about four years into doing this work, my mom told me she had an abortion, too. She had an abortion before me, and her abortion is what made my life possible. She left a relationship that was not serving her. Then she met my dad. Now I’m here. I’m here because of abortion, not just because of my own, but because my mother was able to decide if, when and how to grow her family.

Well, there’s that phrase, “You can’t be what you can’t see.” I don’t totally [subscribe] to it because you can be what you can’t see, but it’s easier to be it if you can also see it. For me, when I had my abortion, I didn’t know any other Black women who’d had abortions. When I looked on TV and people would be debating abortion in the news or whatever, it was two white people.

“You’ll see a lot of people who are like, ‘Why are you having sex if you can’t afford kids?’ Because sex is joy and pleasure and human connection. Deep down, they do not believe that people who can’t afford leisure – Black and brown people, immigrants – are entitled to joy or relaxation.”

Neither were describing my experience, or how it connects to the sociopolitical experiences of Black and brown folks, queer folks, trans folks, immigrants, low-income people in this country. Even when I started sharing my abortion story, the people that I met first were white. I felt like, ”Where are my people?” That’s when I started to realize that racism and anti-Blackness still operate within social justice spaces. That felt important to me, to not only create something where people who had abortions are sharing their stories, but particularly to support all of the folks whose voices are actively pushed out of the conversation.

The anti-abortion movement has worked really, really hard to lean into the misogyny, particularly misogynoir, of pregnancy and sexuality. And the root of that issue is that white supremacists do not believe that Black and brown people should be able to have sex and procreate on their own terms. It has to be terms dictated by whatever conservative white supremacist culture is reigning at the time.

It’s deeply embedded in individualism and capitalism. At the end of the day, you’ll see a lot of people who are like, “Why are you having sex if you can’t afford kids?” Because sex is joy and pleasure and human connection. Deep down, they do not believe that people who can’t afford leisure ― Black and brown people, immigrants ― are entitled to joy or relaxation. I actually think that’s just a deeper critique of capitalism, because it means that every act you do ― every birth ― has to be of service to something else. Abortion, at its core, is a rejection of capitalism.

The hypocrisy of the anti-abortion movement is just so galling. They’re not interested in doing anything to achieve reproductive justice, which would make sure that people have the ability to decide if, when and how to grow their families free from state-sanctioned violence and coercion.

But they’re the ones who are backing forced sterilization policies in jails and in immigration detention centers. They’re the ones who are marching for police who are murdering children in the street. It never has been about “pro-life.” It has been about maintaining white supremacy and a culture in which white people are at the top and get to decide what’s best for everyone else.

Literally, if they gave a shit they would have fixed the pipes in Flint [Michigan], because a hell of a lot of folks were having miscarriages over there because of the water. That would have cost, I don’t know, a couple million dollars? How many defense budgets is that? The anti-abortion movement didn’t care, because it wasn’t serving them. Because it is something that’s impacting Black and brown folks. That’s it.

Back in September, you wrote an article in Rewire News about how the possibility of Roe falling next year is because of anti-Blackness and racism. In the article you wrote: “Because of its own internal racism, the reproductive rights movement is ill-equipped to meet the challenge of this moment.” Talk to me about that.

Frankly, there’s a lot of liberal progressive racism in the movement. And here we are: Democrats with no backbone, who are afraid of the next election, are not doing what needs to be done to protect the majority of people who need abortions in this country. They’re using archaic policies like the filibuster, skirting around the racism that’s so blatant.

We’re about to have a constitutional crisis because of the Supreme Court. And many Democrats say nothing because they’re uncomfortable with abortion? What kind of fucking pro-choice party is that? I want a political party that is willing to love me, and everyone who has abortions, in public, out loud. We are not your dirty little secret. We are not something for you to fundraise off of every single election cycle.

“I want a political party that is willing to love me, and everyone who has abortions, in public, out loud. We are not your dirty little secret.”

You’ve been doing this work for a long time — nearly 10 years, you said. What is your ultimate goal, especially as we look ahead to a possible future without Roe?

We deserve storytellers who talk about great sex and being ratchet, or talking about their faith and saying, “Yeah, God told me to have an abortion.” All of that. I want to create a mirror in which people can see themselves.

This interview has been condensed and lightly edited for clarity.

The Human Cost Of Being Denied An Abortion

How Stylist Alexander-Julian Gibbson Problem-Solves For Stars Like Lucky Daye
Ashanti Reveals She ‘Made Some Calls’ To Get Retaliation Against Man Who Abused Her Little Sister
Marsai Martin Unfazed By Criticism Of Her Savage X Fenty Show Spotlight
Teodoro Obiang, World’s Longest-Serving President, Extends His 43-Year Rule And Sets Up Son To Succeed Him
New Tommy’s tool calculates miscarriage risk to guide care