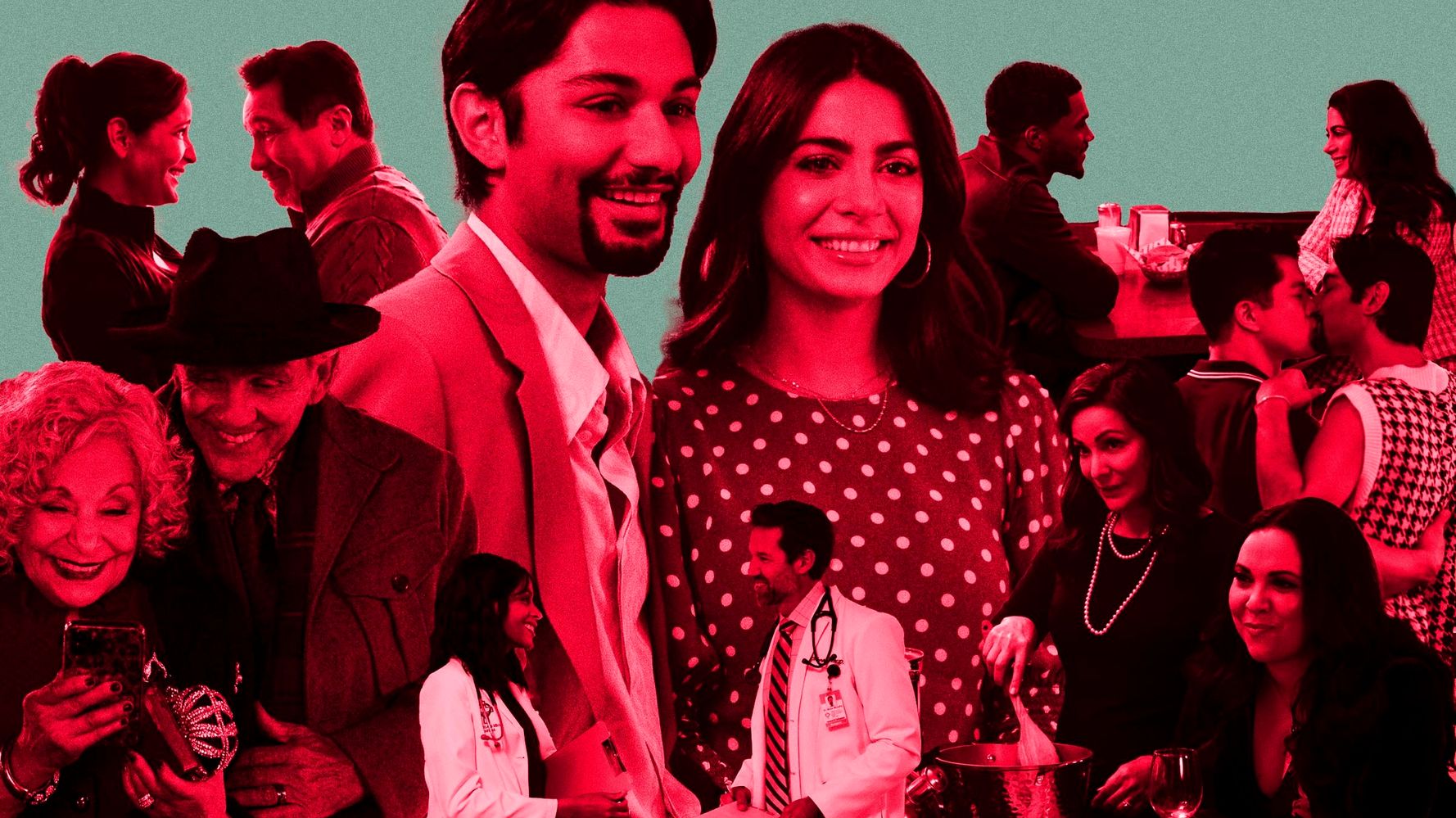 The opening scenes of “With Love” immediately establish the show’s cozy and joyful vibes. Inside a big house decked out in holiday lights, family and friends are mixing and mingling. As the camera moves around the house, it takes us into a spacious kitchen with a marble countertop island piled with steaming platters of food. In designing that kitchen, creator and showrunner Gloria Calderón Kellett had one crucial instruction for the show’s production team.

“I said: ‘Mexican Nancy Meyers. That’s what I want this kitchen to look like,’” she said in a Zoom interview. “And boy, they delivered. That was a beautiful Nancy Meyers Mexican kitchen. Woo! They delivered.”

If you love rom-coms and the holidays, “With Love” has everything: “Love Actually”-style interconnected storylines and characters who keep running into each other by coincidence, someone racing to the airport, someone making an impassioned declaration of love by listing the qualities they adore about the other person — you get the picture.

Premiering on Amazon Friday, Calderón Kellett’s five-episode series takes those tropes and applies them to a mostly Latinx cast and a whole range of relationships. They’re both romantic and platonic, and include characters of different ages and gender and sexual identities. Consequently, the show expands the definition of who gets to experience love on screen and be a part of those classic rom-com tropes.

“All of those things are things that we’ve seen many times, but never with Latinos, and never with us at the holidays, with so many identities and so intergenerational. So it was really so awesome to get to make stuff that now gets to exist,” said Calderón Kellett, who previously co-created and was the co-showrunner on Netflix’s reboot of “One Day at a Time.” “We didn’t have it before, and now, hopefully, it’ll be a part of the societal canon.”

The series follows each of its characters over the course of a year, through major holidays like Christmas Eve/Nochebuena, New Year’s Eve, Valentine’s Day, the Fourth of July and Dia de los Muertos. There are the Diaz siblings: Lily (Emeraude Toubia) and Jorge (Mark Indelicato). Lily breaks up with her boyfriend and finds herself in a love triangle (another trope). Her suitors are Santiago (Rome Flynn), who doesn’t really believe in romance (another trope), and Nick (Desmond Chiam), a bro who secretly likes grand romantic gestures (another trope).

In contrast to Lily, Jorge’s relationship with his boyfriend, Henry (Vincent Rodriguez III), is getting serious. At the Diaz family’s Nochebuena party, he introduces Henry for the first time, and throughout the series, they’re trying to figure out how to support each other’s burgeoning careers. Meanwhile, Lily and Jorge’s cousin Sol (Isis King), a medical resident, is flirting with a hot doctor at work, Dr. Miles Murphy (Todd Grinnell). And everyone envies their parents, Beatriz (Constance Marie) and Jorge Sr. (Benito Martinez), who have a loving marriage on the surface but secretly are struggling to rediscover their spark.

For many of the show’s actors, “With Love” marks a rare opportunity to get to play characters that aren’t defined solely by their identities or relegated to the sidelines.

“Mark Indelicato is so funny and is in so many shows as the side character,” Calderón Kellett said. “Here, he’s the center. He’s one of the romantic leads. Same with Vinnie, same with Isis. You know, all of them are the romantic lead. They’re not the funny sidekick exclusively. And you felt that. You felt the actors feel so joyful that they got to play these multifaceted, messy characters.”

​​For Flynn, who had just worked on three seasons of ABC’s “How to Get Away With Murder,” there was a high bar to clear in choosing a new show.

“I felt a really strong responsibility being on that show because I knew what it represented. So coming from that, I was like: ‘Man, I don’t know how to top that. I don’t know what could come next that would be just as impactful, that will give me the sense of purpose that I’m really searching for out of this work,’” he said. “And this came, and I was just like, ‘Somebody is listening,’ because I literally said: ‘I won’t do another show I don’t care about. I’m not in a rush to jump into a series. It has to be something like this.’”

The beauty of shows like “With Love,” which takes universal themes and tropes and incorporates specificity into them, is that most everyone will be able to relate to various parts of each character. Indelicato said he was drawn to Jorge and Lily’s strong sibling bond and how “they really are each other’s ride or dies.”

“And then you add in these layers of Jorge’s relationship with his dad, and his homosexuality and introducing his boyfriend to his family during the holidays. These are all things that are extremely relatable, I think, to a multitude of audiences and demographics,” he said. “We might be different, from different positions or different geographic locations, this, that or the other. But I feel like we can all unite on wanting to have a family, whether that’s chosen or blood.”

For Toubia, Lily breaking up with her “perfect-on-paper boyfriend” and then entering the minefield that is going to family holiday events while single was deeply relatable.

“Everyone’s always asking: ‘When are you going to bring your boyfriend?’ ‘When are you going to get pregnant?’ and just, like, social pressure from the older generations,” she said. “It’s OK, I mean, they grew up with that kind of tradition. We are now setting our own traditions. So I feel that’s kind of like Lily’s path, of trying to still respect her family’s traditions but finding her own.”

Calderón Kellett herself appears in the series as Beatriz’s sister Gladys, a proudly single woman in her 40s. She wrote the character because she wanted to show a woman for whom marriage and children were “just not a path that she was interested in” — and who is not portrayed as a spinster or an object of pity, as middle-aged single women often are on screen.

“She has a full life and enjoys it, and it’s not sad. And she’s quite pleased to flirt with the 30-year-old boys,” Calderón Kellett said. “I love that character because I think she just exists in every family. There’s that one auntie who either is the divorcée or, you know, she’s drinking with the kids, and she thinks she’s one of them still, but she’s old. I just felt like that was a real character, and I wanted to show that in an unapologetic way. There’s a bravery in women in their mid-40s not just dying for a man, that she’s just quite happy, really likes her life, loves her family, still comes to all the events and is happy to be there, comes alone and is quite pleased to come alone.”

The creator and showrunner didn’t intend to play Gladys. But when she found herself constantly coming up with new jokes for the character, “Andy [Roth], who’s my number two on the show, was like, ‘Well, obviously, you’re playing Gladys.’ And I was like, ‘OK?’” she said. “And thankfully, Amazon was like, ‘All right, sure. Why not? It’s a small role.’”

“With Love” is Calderón Kellett’s first project under her production deal with Amazon. Having come up as a writer on multi-camera network sitcoms, churning out 20 or more episodes per season, she appreciated that the five hour-long episodes of “With Love” gave her more space to develop each of the show’s characters and relationships.

“The multi-cam, by nature of what it is, you’re really focusing on five or six people — and really, you’re focusing on two, and then there’s the periphery characters,” she said. “So this got to breathe a little bit more. I just got to spend a little bit more time with them. You know, even the side characters get to have arcs. Gladys has a full arc. Everyone got to really have a cocktail of things to play.”

Calderón Kellett hopes the show gets picked up for more seasons so she can continue to deepen the relationships and storylines of the Diazes and their family and friends. And given that the show ends with a wedding-related cliffhanger, she’s envisioning a Season 2 that’s full of wedding-related pop culture tropes.

“With Love” also does something quietly significant, even though it shouldn’t be. It gives its characters — people of color and queer and trans people — room to experience joy instead of centering stories of struggle, as Chiam pointed out.

“I have played roles where they have been aware of my identity. I don’t think I’ve played roles that have been respectful of that. I think that the show does a really good job of decoupling identity from struggle because too often, everyone’s like, ‘Oh, your identity must be a struggle.’ No! It must be joyful now. Screw that noise, you know?” he said. “And that is a testament to the writing team. Saying that they’re a diverse team isn’t just lip service. There’s a reason you have to have the diversity of voices in the room in order to be able to do that, because those are the people who are aware that identity is not just about the struggle of it all.”

Instead, as Rodriguez said, the show’s characters are “shined in a bright light, full of love and authenticity and realness — like, we have sex in our show.”

“People of color can play just real people,” Chiam said. “Like, it shouldn’t be, in 2021, this groundbreaking thing. But it kind of is.”

We Met Him As Justin Suarez On ‘Ugly Betty.’ Now Mark Indelicato Is Ready For His Close-Up.

Where Them Dollars At? Houston Strippers Say The Economy And Racism Are Ruining Business
Radio Host Kendra G Accuses DaniLeigh Of Trying To Have Her Removed From Interview: ‘You Ain’t Going To B. Simone Me’
Channing Crowder Is Standing Firm On His Thoughts About Russell Wilson: ‘He’s A F*****g Duck’
Bianca Lawson On The Final Season Of ‘Queen Sugar’ And Career Longevity
August Agboola Browne (1895-1976)