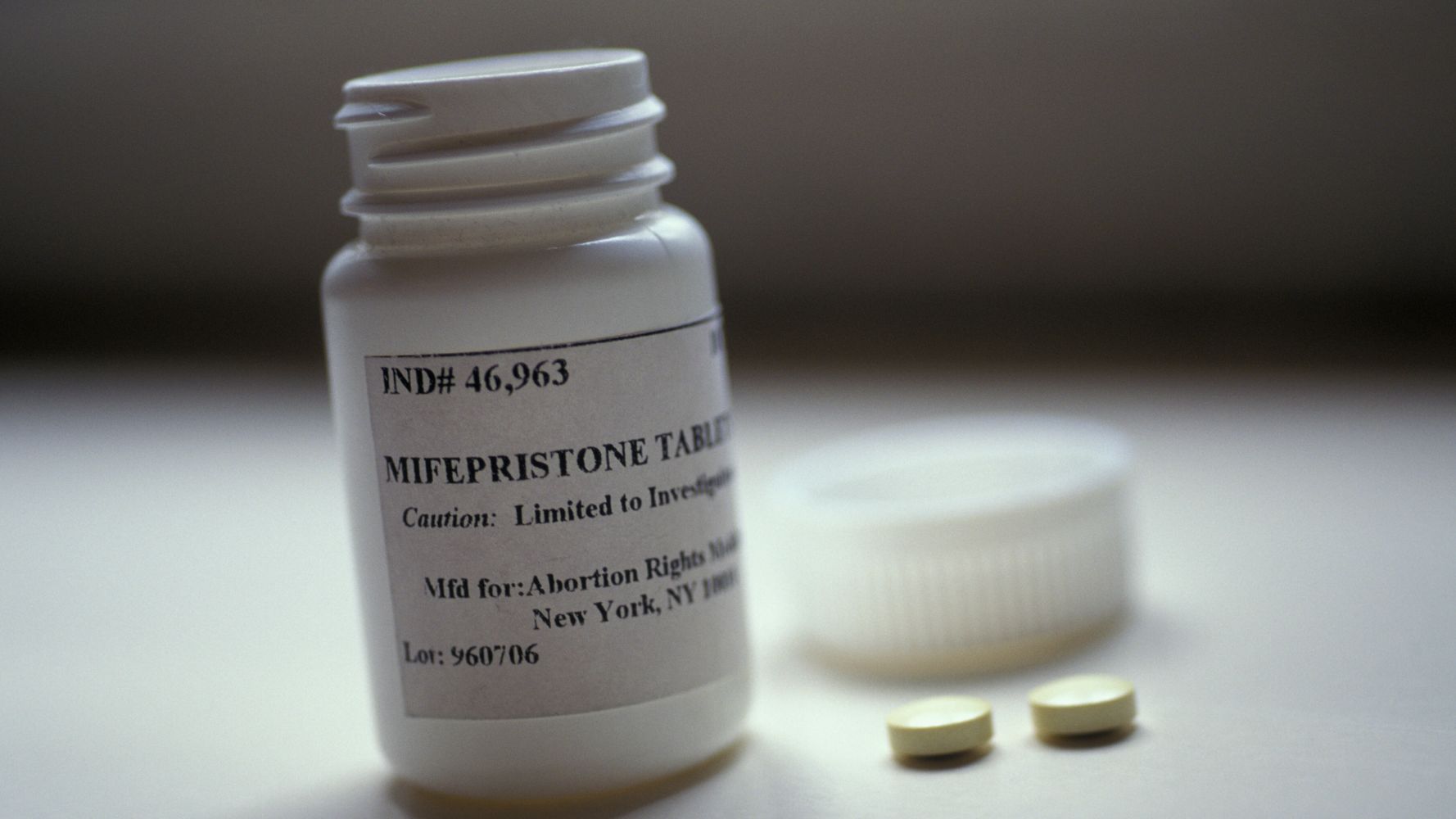 Already buffeted by extreme laws from Republican states and ominous signs from the U.S. Supreme Court, abortion access faces another critical test this week when the U.S. Food and Drug Administration will complete a quiet review of decades-old restrictions on medication abortion.

Widely used ― and safe ― abortion pills have been regulated by antiquated rules for decades, and the FDA has an opportunity to make the medication easier to obtain just at a moment when reproductive rights are in serious peril.

Medication abortion, also known as abortion pills, is a combination of two drugs: mifepristone and misoprostol. Abortion pills are widely used for miscarriage and abortion care across the country, accounting for about 60% of all abortions in the U.S. in the first 10 weeks of pregnancy. When used together, mifepristone and misoprostol are more than 95% effective and are safer than Tylenol.

Despite the widespread use and safety of abortion pills, the FDA has restricted mifepristone through a drug safety program called the Risk and Evaluation Mitigation System (REMS) for three decades. There are three requirements under the REMS, but the most burdensome one is that mifepristone needs to be dispensed in person and that patients cannot obtain it from a pharmacy ― a sharp departure from how people get most other medications.

The temporary lifting of the in-person dispensing requirement came somewhat quietly in a letter to plaintiffs in a federal lawsuit filed in February by the American Civil Liberties Union. The FDA is expected to announce its decision on the larger review of all of the mifepristone restrictions, likely in the same way, sometime before Friday.

Prior to COVID-19, patients could get mifepristone only from a certified prescriber in person at a hospital, clinic or physician’s office; the restriction also prohibited retail pharmacies from stocking and dispensing the medication. Lifting this in-person restriction during the pandemic was important because it allowed for certified prescribers to submit a prescription for medication abortion to mail-order pharmacies. Those pharmacies then delivered the pills directly to a patient’s home where, usually following a telehealth consultation, they could undergo an abortion from the safety and privacy of their own home.

Currently, the FDA approves the safe use of mifepristone for abortion up until the 10th week of pregnancy. The mifepristone REMS include three specific requirements, known as Elements to Assure Safe Use (ETASU), that providers register as certified prescribers in order to authorize abortion pills, patients need to sign a patient agreement and other consent forms before receiving the pills, and (the one lifted amid the pandemic) mifepristone cannot be dispensed from a pharmacy, meaning it has to be obtained in person.

Permanently lifting one or all of these restrictions would have a huge impact on access to abortion in the U.S.

“Abortion pills are amazing technology that have the potential to put the power of this really personal decision directly in the hands of the people who need it. This is a very important part of the future of abortion care ― the ability to access these pills through telemedicine, by mail or even directly over the counter,” said Elisa Wells, co-founder and co-director of Plan C, an advocacy organization that provides people with information on how to obtain abortion pills.

Removing ‘The Politics And Stigma’ From Abortion

Medication abortion advocates and experts tell HuffPost they are hopeful that the FDA will overturn at least two of the three ETASU requirements ― most likely the in-person dispensing restriction that was lifted in light of COVID-19 protocols and the requirement that patients sign a patient agreement form.

That scenario would leave the certification process in place. And although it is not all that rigorous for physicians to register as a certified provider, the stigma of adding your name to a list of abortion providers can be a deterrent to some physicians, especially when abortion providers routinely face harassment, legal attacks and violence from anti-abortion extremists.

There are benefits to taking away the certified prescriber requirement. “It would be much better, I think, if women were able to go to their own health care provider and get this prescription from someone they already know and trust,” said Kirsten Moore, director of the Expanding Medication Abortion Access (EMAA) Project. “In states where they’ve so regulated the practice of abortion care and you’re left with one clinic, having to go to that one clinic to get a prescription is very, very onerous.”

“Abortion pills take all the politics and stigma out of the experience for the patient. Right now, when you’re going into an abortion clinic you are targeted by anti-abortion protesters, you’re shamed and stigmatized. If you’re sitting in your house… it’s nobody’s business what you’re doing.”

The second restriction that advocates believe will likely get turned over is the patient agreement form. In 2016, when the FDA tinkered with a few of the mifepristone restrictions, Dr. Janet Woodcock, who ran the Center for Drug Evaluation and Research at the time, recommended that the patient agreement element be dropped but was overruled. Woodcock is now the acting commissioner of the FDA.

“What we know now, because of the pandemic, is we don’t actually need that physical visit to the doctor,” said Destiny Lopez, co-president of the abortion rights organization All* Above All. “Telehealth exists, it’s a pretty common way of delivering health care and it’s a safe way to deliver and dispense medication abortion. You do a telehealth visit with your doctor, you are provided with the pills via mail or maybe you run to the clinic and you pick them up, but you don’t have to go through the entire process of having to wait and then see the doctor.”

Doing away with the in-person dispensing restriction has also lifted the burden off prescribers who had to be both doctor and pharmacist. Before the pandemic, providers had to pre-purchase the drug, stock it in their clinic and directly dispense it to patients. For physicians who have limited resources and money (think general physicians in rural areas), that served as a big deterrent to providing abortion pills.

The benefits of being able to undergo an abortion at home are seemingly endless. Most of the current logistics that make it so hard to obtain an abortion now ― the cost of travel, finding child care, getting time off of work ― are nonexistent with abortion pills. It can also be a more accessible option for survivors of sexual violence who may be triggered in a hospital or clinic setting, or for victims of intimate partner violence who might not feel able to be away from home for a prolonged period.

“People say that it gives them a sense of control and it feels natural,” said Elizabeth Nash, a principal policy associate at the Guttmacher Institute, an abortion rights research organization. “It really is a method that is very beneficial and is one that has become more and more of a routine abortion method in the country.”

In a nation divided over reproductive rights, where anti-abortion protesters often swarm the few abortion clinics left, taking a few pills on your couch after you put your kids to bed seems like a good option.

“Abortion pills take all the politics and stigma out of the experience for the patient. Right now, when you’re going into an abortion clinic you are targeted by anti-abortion protesters, you’re shamed and stigmatized,” said Wells, of Plan C. “If you’re sitting in your house, on your computer or phone, and then you go to your mailbox, it’s nobody’s business what you’re doing.”

Maria, a Texas native in her 30s, spoke to HuffPost in October about her arduous and expensive journey to get an abortion in the Northeast after her home state banned abortion past six weeks of pregnancy. “It’s wild having to navigate medical care in two different states for something as simple as, like, I went home with a bag of pills,” she said. “I literally flew across the country to take two pills.”

‘This Is No Silver Bullet’

For people living in states with extreme abortion restrictions, like Maria, the FDA’s loosening of requirements around mifepristone won’t have much of an effect. Earlier this month, Texas passed a restriction on medication abortion that bans physicians from sending abortion pills via mail. Texas is the fourth state to introduce a law specifically criminalizing mailing abortion pills; 19 other states, including Texas, ban the use of telemedicine for abortion care.

“What the FDA could decide is that we won’t require prescribers to dispense in clinic — patients will be able to have the abortion pills mailed — or they could also decide that patients could even be able to pick pills up at the pharmacy. And that would be huge,” said Lopez, from All* Above All.

“But this is no silver bullet, unfortunately,” she added, “because there are folks who live in states that have banned the use of telehealth services for abortion care or imposed, as Texas has, a six-week ban. For those folks, this is still not necessarily an option that they are going to benefit from.”

And restrictions on medication abortion aren’t the only attacks on reproductive rights. Just last week, the Supreme Court allowed the draconian Texas ban that deputizes private citizens to continue, and at least three other states have introduced copycat legislation. Earlier this month, the high court heard oral arguments in Dobbs v. Jackson Women’s Health Organization, a case that centers on a 15-week abortion ban in Mississippi. Although the decision won’t be handed down until June or July, the oral arguments suggested that the conservative majority on the Supreme Court is likely to gut Roe.

If the FDA does loosen restrictions, it will improve access to abortion care ― at least for a little while, advocates say.

The Bill That Could Protect Abortion Rights If Roe Is Overturned

Kansas Abortion Nightmare Isn’t Over Yet: Extremist Kris Kobach Running For State AG
‘P-Valley’ Star Nicco Annan Wants Others Who Look Like Him To Truly Be Celebrated
9 Times Charlamagne Tha God Was Out Of Pocket And Said Some Wild S**t
Twitter Explodes After Discovering Blueface’s Girlfriend Chrisean Rock Is An Athletic Superstar
Who Is Crystal Renay? 5 Fast Facts About Ne-Yo’s Estranged Wife