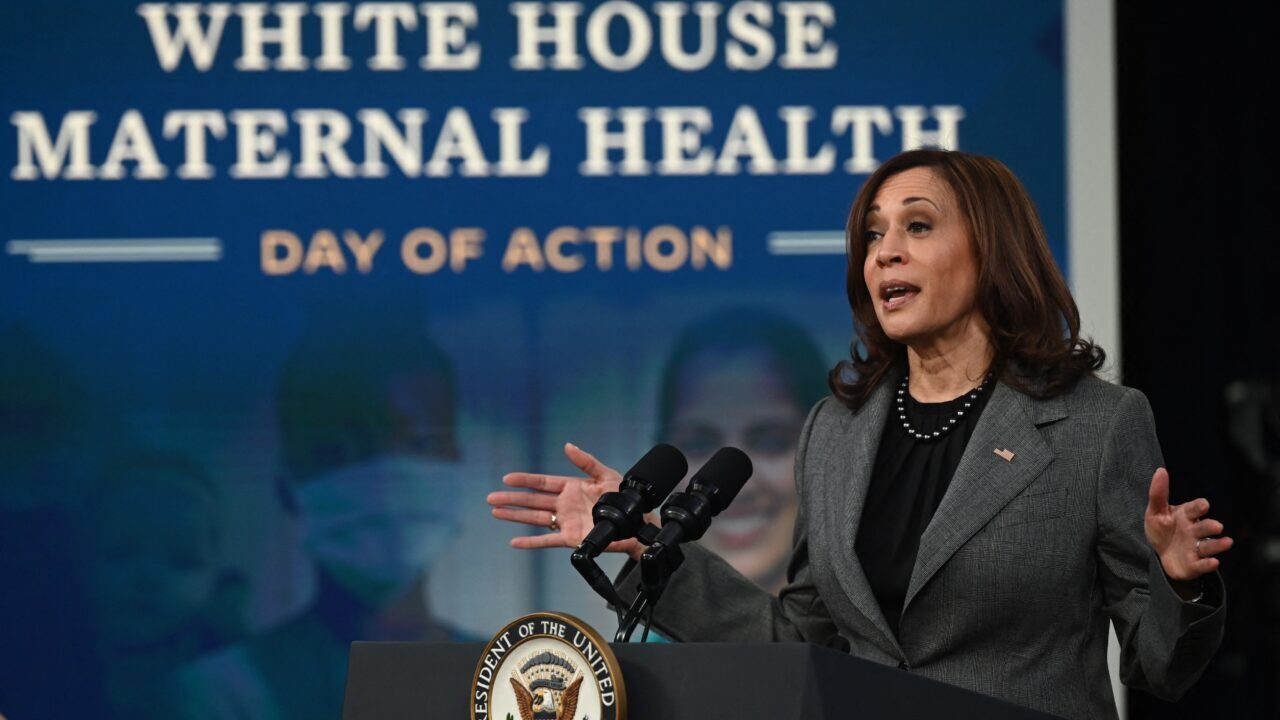 The hybrid in-person and virtual event highlighted policy solutions developed over nearly a decade in collaboration with the Congressional Black Maternal Health Caucus and a deep bench of policymakers, researchers, and leaders on the frontlines of the crisis.

Vice President Harris made clear that the White House is taking unprecedented action when she highlighted $3 billion in new maternal health investments proposed in the yet to passed Build Back Better Act, in addition to new commitments to support safe pregnancies and childbirth, and reduce complications and mortality in the year following birth.

Some of the most interesting interventions to help address the more than 50% of maternal deaths that happen after birth include the launch of a new Department of Health and Human Services report on a Centers for Medicare and Medicaid Services (CMS) initiative to designate birthing-friendly hospitals.

The Biden-Harris administration has also pledged to invest in remote-care monitors for rural communities, education programs for maternal health providers, and innovative care models for the postpartum period.

If every state adopted an extension — as required in the Build Back Better Act — then the number of Americans getting coverage for a full year postpartum would roughly double, extending coverage for an estimated 720,000 people in a given year. 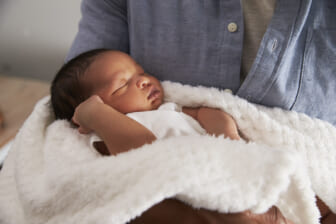 According to the White House, “America’s maternal mortality rates are among the highest in the developed world, and they are especially high among Black women and Native American women, regardless of their income or education levels.”

“One of the challenges for me as one of the few African Americans in the U.S. Senate is that my community doesn’t yet know all these things,” said Senator Cory Booker in an exclusive interview with theGrio.

“A lot of focus is rightfully on voting rights, policing reform, and I know those things are a focus and we haven’t gotten those things done and we need a lot of help to do them but to overlook all these incredible accomplishments for America — Black America in particular — is just wrong.”

As a Senator, Vice President Harris introduced the Maternal CARE Act and the Black Maternal Health Momnibus Act, which would provide significant additional resources to address the crisis. The Momnibus, re-introduced earlier this year by U.S. Congresswoman Lauren Underwood of Ohio, squarely focuses on addressing maternal health disparities, which is already viewed by some lawmakers as a significant and substantive legislative win for the Biden-Harris administration in their mandate to deliver solutions that uplift the Black community.

“We spent over 8 years developing policies that would make a difference, working with advocates and community leaders, and developing a set of bills of which I’m proud to have been a major co-sponsor and writer of many of them with Sen. Harris when she was Sen. Harris along with Reps. Ayanna Pressley, Rep. Alma Adams, and Rep. Lauren Underwood,” Senator Booker told theGrio.

“We were ready for an opportunity like this congresses ago. So when you suddenly have a president and vice president, like we have, that take these issues seriously and don’t just talk about how they want to honor the sanctity of life but actually are interested in doing what’s necessary to accomplish that, then you get this incredible generous adoption of bills into this major bill. Most Democratic senators are co-sponsors of this legislation, so I’m very confident we’re going to be able to get it, if not almost as is, in the final Build Back Better bill.”

During her remarks on Tuesday, Vice President Harris noted that “maternal mortality and morbidity is a serious crisis and one that endangers both public health and economic growth, which means everyone is impacted by it.

Aside from Vice President Harris, the real people stories peppered throughout the mostly virtual half-day summit, grounded the administration’s interventions in reality.

From Allyson Felix, the most decorated woman in Olympic track and field history who developed severe preeclampsia after 32 weeks of pregnancy to Toni Brown who lost her only child with slightly high blood pressure after her daughter’s pregnancy was medically induced, a range of maternal health challenges were on full display.

Alexis Ohanian, the husband of Serena Williams, was also a part of the summit as a participant on the “Role of Men in Maternal Health” panel along with Sen. Booker and Charles Johnson, who founded 4kira4moms who lost his wife Kira to maternal death in 2016.

In a statement provided to theGrio, Ohanian said he wanted to share his story in hopes of inspiring more men to enlist in the movement for maternal health equity and paid family leave.

“As someone whose partner endured a traumatic and near-fatal birthing experience, I witnessed the flawed system firsthand. The challenges we faced in the immediate aftermath of my daughter’s birth, despite all of the advantages and privilege we had as a family, are a large part of why I’ve become an advocate for paid family leave,” read Ohanian’s statement to theGrio.

“I don’t want any American woman or man visiting a loved one in the NICU or the ICU and being forced to choose between their family and their job. The issues of maternal health and paid family leave are inextricably linked, and should both be at the top of our priority list as a country.”

It remains unclear whether paid family leave will be included in the final version of the Build Back Better Act as moderate Democrat Sen. Joe Manchin remains to be a hold out. Sen. Booker, however, told theGrio that “there is a lot of effort going on to persuade” him and others “on the difference paid family leave would make for women and men in their state.”

“We need to tell our stories. It’s the way we deeply engage with another, inspire empathy and action,” Sen. Booker told theGrio. “I think the one big takeaway is that this issue is affecting men, children, and issues affecting our society in ways many of us may not be conscious of. We can’t have such a poverty of empathy that we don’t understand that. The second big takeaway – dear God, we need to pass the Build Back Better Act.”

Currently one in four women return to work two weeks after giving birth. Between the Build Back Better bill provisions and the actions of private sector leaders like Alexis Ohanian, whose venture capital fund Seven Seven Six is investing aggressively in FemTech and FamilyTech to help fight this crisis, it seemed clear that the government cannot solve these solvable challenges alone — nor can the private sector.

For the government’s part, the White House appears to be turning up the volume on this historic and herculean effort to deliver for America’s moms and moms-to-be by providing comprehensive maternal healthcare and paid family leave.

Considering Vice President Harris’s track record on these issues in the U.S. Senate and as California attorney general, the growing movement around maternal health equity and reproductive rights, and the perception of her mile-wide portfolio, leaning into these critical issues could be her most distinctive and consequential contribution to the Biden-Harris legislative agenda yet.

“It’s time for the Senate to pass the Build Back Better Act so we can invest in maternal health equity and save moms’ lives,” said Rep. Lauren Underwood (IL-14). “This is not a problem without solutions, or a crisis without hope.” 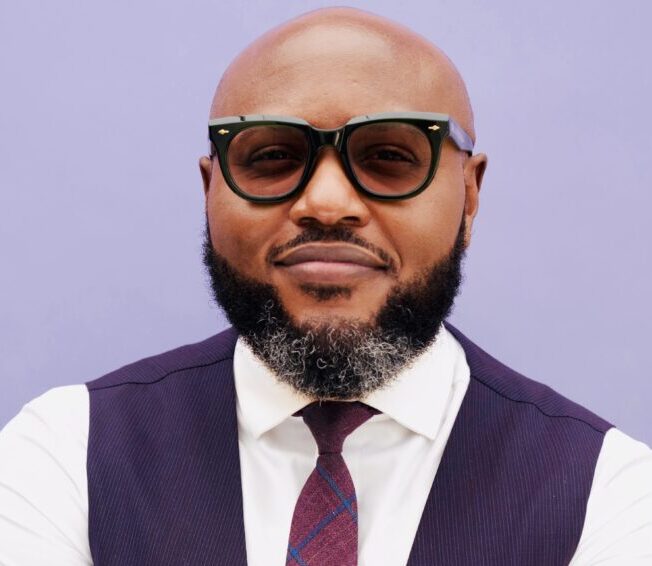 Sheila Guyse (1925-2013)
Radio Host Kendra G Accuses DaniLeigh Of Trying To Have Her Removed From Interview: ‘You Ain’t Going To B. Simone Me’
5 Facts You Should Know About Top Dawg Entertainment’s Ray Vaughn
The Little Black Girls We Adored On Relaxer Boxes Are Going Viral On Twitter
No Yolanda Adams Slander Shall Prosper: Tamron Hall Puts Kim Burrell In Her Place In The Most Classy Way Possible