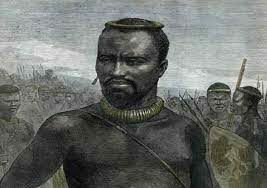 The Tacky’s War, also known as Tacky’s Rebellion, was an uprising among Jamaica Akan enslaved people from Ghana that occurred in Saint Mary Parish, Jamaica against the British from 1760 to 1761. Other ethnic groups from Ghana including the Akyem, Nzema, Fanti, and Ashanti took part in the rebellion. The rebellion was led by Tacky (also known as Takyi), who was from the Fante ethnic group in Ghana. This war was one of the most significant slave rebellions in Caribbean during the eighteenth century before the Haitian Revolution which began three decades later.

The goal of the rebellion was to take control of the British island colony and create a separate Black independent nation. The rebels were inspired by the First Maroon War that also occurred in Jamaica from 1728 to 1740. That rebellion was led by Queen Nanny of the Maroons. They did not know that the success of the Maroons in that earlier conflict would eventual help bring about the downfall of their rebellion.

Tacky’s War began on Easter Monday on April 7, 1760. Tacky and his followers begin the rebellion by killing white masters and overseers on the Frontier and Trinity plantations. The owner of Trinity plantation, Zachary Bayly, however, managed to escape. Slaves also rose up on the Esher estate owned by wealthy politician William Beckford and joined in the rebellion. The rebels, now in the hundreds made their way to the storeroom at Fort Haldane where they killed the storekeeper and captured and defended the town of Port Maria from British colonial forces. Tacky and his troops commandeered nearly four barrels of gunpowder and forty firearms and then overran the Heywood Hall plantation. 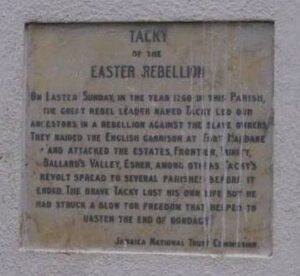 By this point over more than 400 people had joined Tacky and his followers. While at Ballard’s Valley, as Tacky and his followers were celebrating their success, one enslaved person slipped away and sounded the alarm. In response on April 9, 1760, Lieutenant Governor Sir Henry Moore, dispatched the 74th regiment, comprising 80 mounted militia from Spanish Town, the colonial capital, to the rebellion in Saint Mary Parish. Ironically the militia were joined by Maroons (Free Black People) from Moore Town, Charles Town, and Scott’s Hall, Jamaica.

On April 12, 1760, British troops and their Maroon allies attacked the rebels, wounding Tacky in battle. Two days later additional Maroons under British commanders engaged Tacky and his followers in the Battle of Rocky Valley. Most of the rebels were killed. Many other fled into a cave near what is now called Tacky Falls where they committed mass suicide. Tacky and a few of his followers fled into the woods pursued by Maroons. One British marksman attacking with the Maroons, shot and killed Tacky and then severed his head. That head was then displayed on a pole in Spanish Town until some of Tacky’s surviving followers took it down. Many of the remaining surviving rebels were capture and executed. Resistance however, continued for nearly a year until 1761 when British colonial forces and their Maroon allies killed or captured the remaining followers.

Trevor Noah Reveals His Exit Announcement Was A Total Shock, Even To His Own Team
Joe Biden Can Confirm Even More Judges If Democrats Win Georgia’s Senate Race
Grand Jury Indicts White Men Accused Of Firing At Black FedEx Driver In Mississippi
How Stylist Alexander-Julian Gibbson Problem-Solves For Stars Like Lucky Daye
6 People Dead And Many More Injured After Walmart Employee Shot His Colleagues