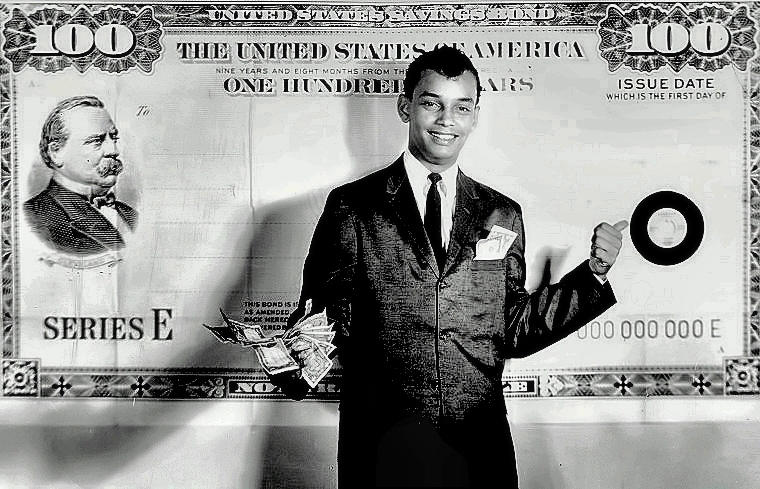 R&B singer and lyricist Gary U.S. Bonds was born Gary Levone Anderson, Jr. on June 6, 1939, in Jacksonville, Florida, to Irene Anderson, a piano teacher, and Gary Anderson, Sr., a professor at Hampton Institute. The family moved to Norfolk, Virginia, when he was two years old. In the 1950s, as a teenager, Bonds and friends harmonized doo-wop on the corner of Church Street and Brambleton Avenue in Norfolk. Bonds later formed The Turks comprising Melvin McNair, Hollis Coleman, Thomas High, Hermione Gross, and Raymond Haskins.

After graduating from Booker T. Washington High School in 1957, Bonds in 1958 adopted his stage name during the period when the United States government promoted U.S. Saving Bonds.

Bonds’ first hit, “New Orleans,” peaked at no. 6 in 1960 on Billboard Hot 100 and remained charted for 14 weeks. The following year, 1961, he released the minor hit “Not Me.” His next single, “Quarter To Three,” reached no. 1 on the Billboard Hot 100 and stayed there for 15 weeks. It also peaked at no. 3 on the R&B singles chart and sold one million records. Bond’s first royalty check was for $120,000 and his second tour took him abroad to London, England where he performed with Roy Orbison and Gene McDaniels.

In a 1963 tour of Europe, Bond headlined above several musicians including the Beatles. His popularity waned after that and by the early 1970s he turned to Country Music. His song “She’s All I Got” was nominated for the Country Music Association’s “Song of the Year” in 1972.

Bonds returned to Rock and Roll in the 1980s and in 1981, his single “This Little Girl,” from the album Dedication, peaked at no. 11 on the Billboard Hot 100 and remained charted for 18 weeks. Dedication garnered Bonds his first Grammy nomination in 1981 for Best Male Rock Vocal Performance at the 23rd Annual Grammy Awards. He followed in 1982 with “Out of Work” which peaked at no. 21 and remained on the charts for 16 weeks. This was his last hit record although he released albums Back in 20 in 2004 and Let Them Talk in 2009.

Gary U.S. Bonds, now based in New York City and the lead artist of the “Norfolk Sound,” continues to perform in small settings nationwide.

Ray J Responds To Being Compared To Kim Kardashian’s New Headphones In Viral Meme
Keke Palmer Says She Wouldn’t Be A Good President But Her Virgo Energy Has Us Thinking Otherwise
The Spring 2002 Deltas From Spelman Did This STUNNING Photoshoot in Costa Rica to Celebrate Their 20th DELTAversary
Patti LaBelle Addresses Drama With Diana Ross & The Supremes
5 Years Later, The Hunt For White Supremacists Who Terrorized Charlottesville Continues