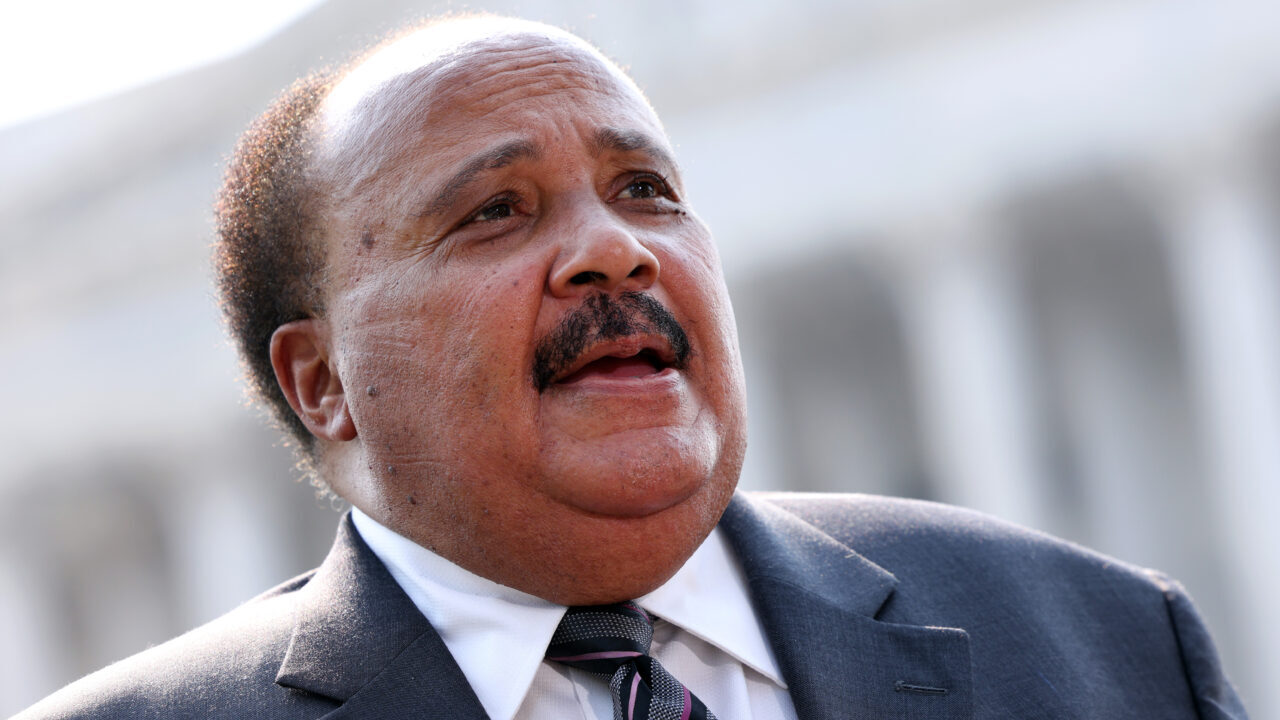 Cilvil rights leader Martin Luther King III speaks at a press conference on voting rights outside of the U.S. Capitol on September 13, 2021 in Washington, DC. (Photo by Kevin Dietsch/Getty Images)

President Joe Biden stands by the jury’s verdict in the Kyle Rittenhouse trial saying, “the jury system works.” However, civil rights leaders say the trial’s outcome was a miscarriage of justice.

The NAACP slammed Friday’s acquittal of Rittenhouse on all charges in the shootings of Black Lives Matter protesters. In a statement released after the verdict, the civil rights organization’s president, Derrick Johnson, said Rittenhouse’s not guilty verdict is a “reminder of the treacherous roles that White supremacy and privilege play in our justice system.”

Martin Luther King III, chairperson of the Drum Major Institute and son of civil rights giant Martin Luther King Jr., told theGrio on the Rittenhouse trial, “it is very clear the judge was biased in that case and that is very unfortunate.”

“You inject yourself into a fight and then turn around and say you’re helping someone is strange to me,” King added in response to Rittenhouse’s defense.

America’s criminal justice system dominated the news this week as multiple high-profile cases in different parts of the country focused attention on matters of race and justice — including that of Rittenhouse and the trial of White defendants Travis and Gregory McMichael and William “Roddie” Bryan Jr., who are accused of murdering unarmed Ahmaud Arbery, who was Black.

Outside the Wisconsin trial, the National Guard was called in to intervene and keep peace in the midst of heightened tensions. Nearby schools resorted to remote learning as the area prepared for unrest. However, things remained peaceful following Friday’s jury verdict.

Kyle Rittenhouse is a free man. Now the nation awaits the U.S. Department of Justice and what it will or will not do on the federal level as it relates to the Rittenhouse case.

Rittenhouse is now part of a list of vigilantes claiming they wanted to help, and who ultimately walked free after killing a person(s). That list includes Florida neighborhood watchman George Zimmerman, who fatally shot 17-year-old Trayvon Martin in 2012. Zimmerman, who went on to brag about killing the unarmed teen, successfully used the controversial ‘Stand Your Ground’ law in his defense.

For centuries, the Black community has decried that the criminal justice system is not fair or just and see a clear connection in a long history of Black boys and young men killed by the hands of White violence; from slave patrols and lynchings; the murders of Emmett Till (1955), James Byrd (1998), Trayvon Martin and, more recently, the fatal shooting of Ahmaud Arbery in February 2020.

King III was in the courtroom Thursday for the Georgia trial in Arbery’s killing where defense attorneys in the case once again challenged the court proceedings with a request for a mistrial over the presence of Black pastors and civil rights leaders convening outside the courthouse. Defense attorney Kevin Gough claimed that the jury could hear the Black pastors outside praying and rallying in support of the Arbery family.

In total, about 500 Black pastors and ministers, of different races and genders, prayed that justice will prevail in the case. During Thursday’s proceeding, the prosecution in the McMichael/Bryan trial cross-examined Travis McMichael, the man who fatally shot Ahmaud Arbery twice in the chest.

McMichael said he was acting in self defense when he fatally shot Arbery, 25, after the latter toured a new house construction site while out on a jog in the predominantly White Brunswick neighborhood. McMichael said he felt Arbery was a threat as he acknowledged that Arbery never responded to him as the unarmed jogger ran away from the gun-toting White man.

“Where is humanity, why didn’t they call the police?” said King, who was in the courtroom with the family of Arbery as support along with the Jackson, telling theGrio, “I want the fullest sentence he can be given.”

In Oklahoma, after scores of names on petitions, celebrity pleas and demonstrations, Governor Kevin Stitt offered clemency for Julius Jones who was set to be executed. With just a few hours to spare, the governor reduced Jones’ death row sentence to life in prison without parole.

King, acknowledging civil rights leaders are very busy with the large load of legal cases, said, “[the clemency] was great, there was enough [evidence] for that man not to be killed.”

Overturning executions like Jones’ can be achieved, he said, “When people are engaged.”

In another trial, closing arguments are underway for the man who organized the 2017 White supremacist rally in Charlottesville, Va. During the ‘Unite the Right’ rally that ended in the murder of activist Heather Heyer after a car drove into a crowd of counter protesters. The trial has been underway for about three and a half weeks.

The Game On The Super Bowl Halftime Show With Dr.Dre, Snoop Dogg & More
Delta Sigma Theta’s Dr. Sesha Joi Moon Named Director of the House of Representatives’ Office of Diversity and Inclusion
#LilDonald Suggests Rappers Getting Lawyers Before Managers
Door By Door, A Small Group Of Kansans Changed The Abortion Debate
How ‘P-Valley’ And ‘The Chi’ Tapped Into Much-Needed Conversations About Abortion On TV