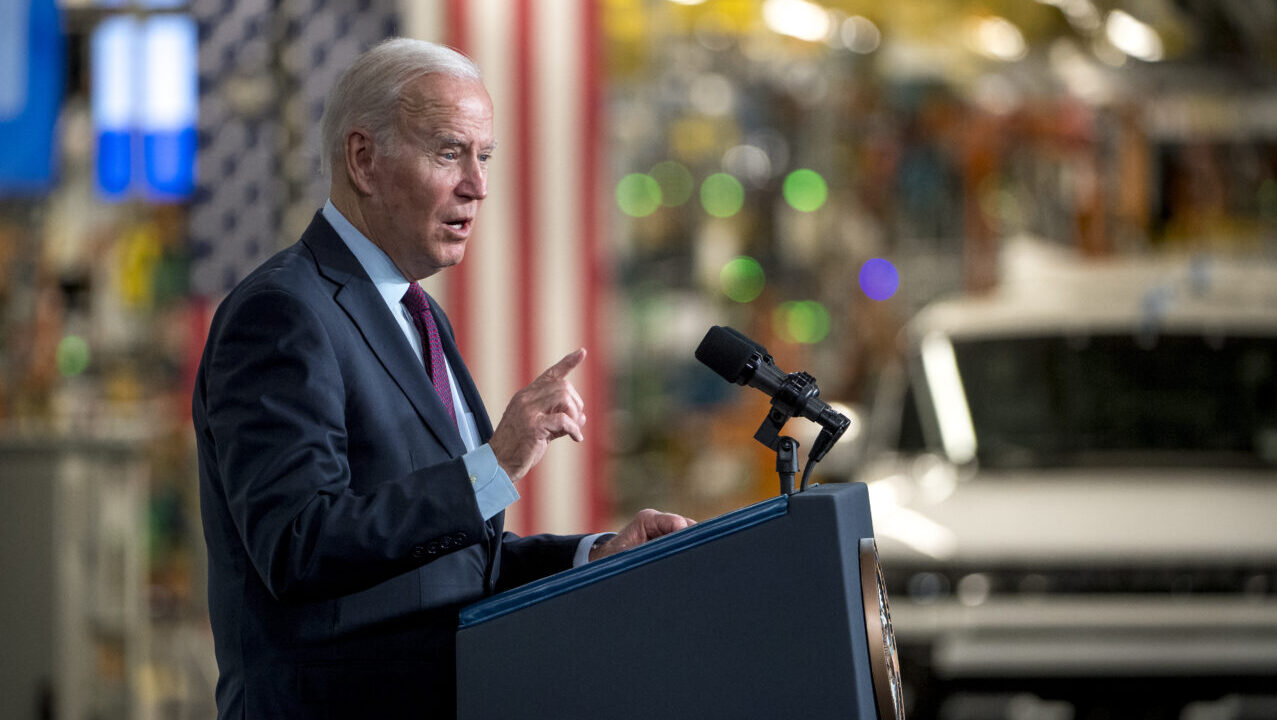 President Biden traveled to American automaker, General Motors, and its Factory Zero electric vehicle assembly plant. The facility is expected to become an all-electric manufacturing plant by 2035. This GM complex is in line with many of the key points in the $1.2 trillion Infrastructure Investment and Jobs Act that builds electric vehicle charging stations across the country.

The White House believes this new law will also make it easier to drive an electric vehicle, reduce emissions to fight the climate crisis, and create good-paying union jobs across the country.

On day one of the president’s infrastructure tour on Tuesday, President Biden wore a winter dress coat and spoke in the cold and snow about a crumbling bridge in New Hampshire. His presence emphasized the need to repair these structures for safety and job creation.

During the outdoor event as snow was visibly falling on his face, Biden said, “it is never a good bet to bet against America.” When it comes to this country’s infrastructure standing, the president has constantly reminded Americans that on the issue of infrastructure, the U.S. is ranked 13th in the world — something he and officials have said is not acceptable.

While Biden was in New Hampshire, White House Senior Advisor Cedric Richmond and Congressional Black Caucus Chair U.S. Rep. Joyce Beatty of Ohio held a press call on Zoom to explain how the components of the infrastructure law impacts minorities, particularly the 17 million Black people who live in the United States.

When it comes to job creation, low and middle income Americans stand to benefit significantly from Biden’s new infrastructure law. Richmond affirmed that 95% of the jobs being created through the law will not require a 4-year degree and 90% don’t require a 2-year degree.

Roads, bridges, railways, laying fiber for broadband, clearing brownfields and work to replace antiquated lead pipes are part of the aggressive spending plan that will generate new employment for scores of Americans.

Congresswoman Beatty noted specific numbers for some line items that affect Black America, including $65 billion in broadband, $55 billion earmarked to expand access to clean drinking water, and $400 billion for childcare and universal kindergarten.

She also emphasized that these investments will bring 40% of Black children out of poverty.

Cedric Richmond, a graduate of Morehouse College, said HBCUs received $4.2 billion this year, an increase in the HBCU budget by $240 million. Richmond did not shy away from touting the historic Biden funding hike for these institutions.

“We want to invest in them in the long hall,” said the former U.S. congressman.

When it comes to the investments in many of the Black America components of the infrastructure law, Beatty emphasized that it is a major win.

Congresswoman Beatty said her presence, as well as that of Cedric Richmond and White House Domestic Policy Advisor Susan Rice, in the room was crucial to ensuring these critical investments became a reality for Black America.

“It makes a difference when you are in the room and you have a seat at the table,” she said.