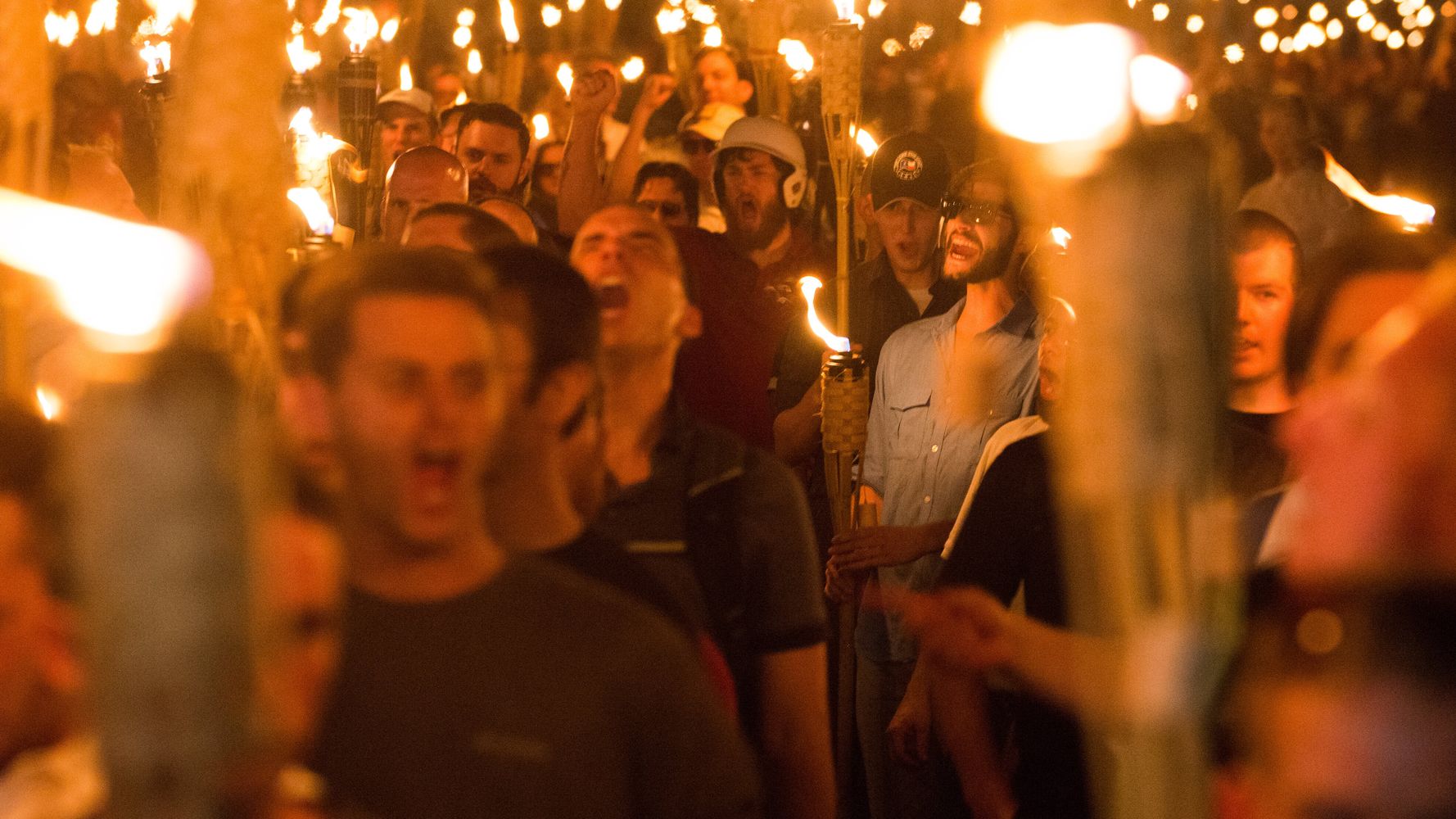 An unsavory array of right-wing figures appeared in a Charlottesville, Virginia, federal court this week, marking the third straight week of trial proceedings in an ambitious, long-running civil lawsuit against a dozen individuals and groups accused of planning the deadly Unite the Right rally in 2017.

But a greater array was expected, as a small handful of defendants still have not shown up for their own trial.

The nine plaintiffs in the suit — which was brought by the nonprofit Integrity First for America — and their legal team aim to bankrupt some of the most influential names on the fringe right “to ensure,” their complaint says, “that nothing like this will happen again at the hands of Defendants ― not on the streets of Charlottesville, Virginia, and not anywhere else in the United States of America.”

Among those facing substantial financial damages in the suit, two ― white nationalists Richard Spencer and Christopher Cantwell ― are each representing themselves, and are doing a solid job racking up rebukes from Judge Norman K. Moon.

To win damages, the plaintiffs will need to convince the jury that the defendants conspired to commit acts of violence that were motivated by racism and antisemitism. They have a whopping 5.3 terabytes of evidence on their side. Yet objections from plaintiffs’ attorneys became increasingly weary this week as various members of the defense sought to probe witnesses’ knowledge of such disconnected topics as the Hebrew scriptures, the Japanese concept of honne and tatemae, and the city-state of Singapore. The judge has repeatedly complained about just how much time the trial is taking ― and there’s still plenty left to go.

This is what jurors have heard so far.

Plaintiffs suffered injuries ranging from a fractured skull and broken bones to problems with their mental health and personal lives.

Several of the plaintiffs became emotional on the stand as they recounted the events of the August 2017 weekend. Some broke down in sobs.

Elizabeth Sines testified that the sound of James Alex Fields driving his Dodge Challenger down a Charlottesville road into a crowd of counterprotesters “was like if you took a metal baseball bat and ran it against a wooden fence.” April Muñiz said she “heard the sound of metal hitting bodies … metal on flesh, metal on metal.”

Both women avoided being struck by Fields’ car, but they described emotional scars from bearing witness to the scene of destruction. Several plaintiffs were even more unlucky. Natalie Romero suffered a gruesome head injury that she compared to a war scene in a movie.

Marissa Blair credited the weekend with eventually undoing her marriage. She had attended the Aug. 12 event with her fiancé, Marcus Martin, another plaintiff who was thrown into the air by Fields’ car, and her friend Heather Heyer, who died after being struck by the vehicle. Blair and Martin married in 2018 but later split, in large part over friction related to Martin’s extensive injuries, Blair said.

The event on the night of Aug. 11 also had lasting effects on some of the plaintiffs. Romero teared up when she recalled hearing the torch-wielding demonstrators chant, “You will not replace us!” She and plaintiff Devin Willis were part of a group of students gathered around a statue of Thomas Jefferson who were then surrounded and harassed by the men with torches. Sines had a different vantage point, as she was standing on a platform above the statue.

“It was like watching cancer cells attack a healthy cell ― one by one, until you couldn’t even see them anymore, they had just been swarmed,” she said.

Willis described the emotional impact of that night, when he feared for his life.

“I stopped being an outgoing, sociable person,” he testified, according to C-VILLE Weekly. “I became very suspicious of people.”

Medical industry experts testified to the enormous medical bills some of the defendants can expect to pay, for both physical and psychological injuries, for the rest of their lives.

Deborah Lipstadt, a professor at Emory University who is also one of the nation’s leading experts in Holocaust studies, was among the experts called by the plaintiffs. She discussed aspects of extremist culture and testified about the extent to which the Unite the Right organizers and participants had been inspired by Nazi Germany.

“There was a great deal of overt antisemitism and adulation of the Third Reich throughout the evidence I looked at,” Lipstadt told the court, according to Forward, a Jewish news site. “Very few things surprise me, but I was taken aback.”

At one point, she was questioned directly by Cantwell, who leaves court each day and returns to a prison cell after being convicted on other charges earlier this year. Like other defendants, Cantwell has suggested that much of his online discussions and messages were made in jest ― that even remarks about “gassing” Jewish people were part of a tongue-in-cheek sense of humor. Cantwell asked whether Lipstadt believed “there’s no such thing as an innocent” racist or antisemitic joke. She said yes, that’s true.

Peter Simi, who studies extremism at Chapman University, was also placed in the odd position of fielding questions from the exact kind of people he studies.

“When is a racist joke just a joke?” Cantwell asked Simi, who explained that the nature of white supremacist language ― which he said engages in doublespeak ― meant that it was never really “just a joke.”

Defendant Matthew Heimbach, a co-founder of the Traditionalist Worker Party, testified that, in his opinion, Fields did nothing wrong by plowing his car into a crowd of people. Defendant Michael Tubbs testified, “It was the proudest moment of my life on the streets of Charlottesville that day; I have no regrets about it,” according to Vice News reporter Tess Owen. Tubbs is involved with the League of the South, a white nationalist organization.

One particularly cringeworthy moment came when Cantwell rose to cross-examine Heimbach and asked, “What’s your favorite Holocaust joke?” There was a pause before Cantwell withdrew the question, and both men laughed.

In his opening statements, Cantwell managed to bring up “Mein Kampf,” use the N-word and promote his far-right radio show.

A plethora of evidence shown in court documented the Unite the Right organizers’ and participants’ admiration for Hitler, and some declared their love for Hitler openly in court. When confronted with their own racist quotes, however, some, including Spencer, attempted to downplay them or present themselves as reformed.

The Unite the Right organizers put thought into their PR strategy.

Infamous photos from the Aug. 11 tiki-torch march showed a small army of men dressed largely in white polos and khaki pants ― a uniform promoted by Identity Evropa, a white nationalist group named in the lawsuit. Heimbach testified that he settled on black to be the uniform for his group because it could hide blood, admitting that blood on a white polo was “not a good look.” Other messages showed organizers worried that anyone showing up in Ku Klux Klan robes would hurt their cause.

In court, Spencer sought to distance himself from hateful iconography, denying that the tiki torches were evocative of the KKK, Nazi-era Germany or contemporary racist marches in Germany. Rather, he claimed that the torches simply evoked “the mystery and magic of fire and darkness.” Similarly, defendants have claimed “Heil Hitler” salutes were actually Roman salutes ― part of a well-known effort to rebrand the hate symbol.

Defendants painted antifa as a big threat during Unite the Right, despite scant evidence that “both sides” were violent.

After Unite the Right, then-President Donald Trump infamously gave a press conference in which he told reporters there were both troublemakers and good people “on both sides” of the conflict. The phrase “both sides” thus became shorthand for the false equivalency between far-right extremists and left-wing activists.

A recurring set of questions from the defense concerned antifa, the loosely organized anti-fascist group that became a right-wing boogeyman after the Charlottesville rally. Cantwell repeatedly demanded to know whether plaintiffs saw anyone carrying red or black bandanas ― colors associated with communism and antifa, respectively ― that weekend, which he said would prove the other side had also conspired to be violent. Heimbach testified that he was afraid antifa members would use makeshift weapons, such as locks stuffed into socks.

Attorneys for defendants also attempted to paint Rev. Seth Wispelwey, a plaintiff and Charlottesville native, as a radical based in part on his Twitter presence, where he follows some progressive activists. Wispelwey testified that he endured a slew of threats and slurs from Unite the Right participants and witnessed the car attack, although he was not injured.

Spencer grilled him on a past interview in an effort to prove that Wispelwey was “motivated by left-wing activism.” But he lost his footing when he went down a line of questioning about specific aspects of Christian faith.

“You are a pastor. It is the Bible I’m talking about,” Spencer said sarcastically before the judge ordered him to move on.

The case of the disappearing evidence may never be fully solved.

Certain piece of evidence ― such as cellphones, chats and emails ― vanished before they could become evidence in the trial, which irritated the plaintiffs’ lawyers. The defense has made various excuses, including that the phones were broken or lost, or that a trove of online messages was deleted from a company’s server unintentionally. When pressed in court, various defendants denied any wrongdoing on the subject.

But Heimbach did give new information about what happened in one specific case involving his VK account. (VK is a Russian social media site.) Apparently, his now-ex-wife deleted the account following an argument between the couple over who would take out the trash.

There’s more to come next week.

Jason Kessler ― the white nationalist who got a permit for Unite the Right from the city of Charlottesville ― has yet to take the stand. Cantwell is still expected to answer direct questions, too.

The case is scheduled through Nov. 19.

A 19th-Century Law Dismantled The KKK. Now It Could Bring Down A New Generation Of Extremists.