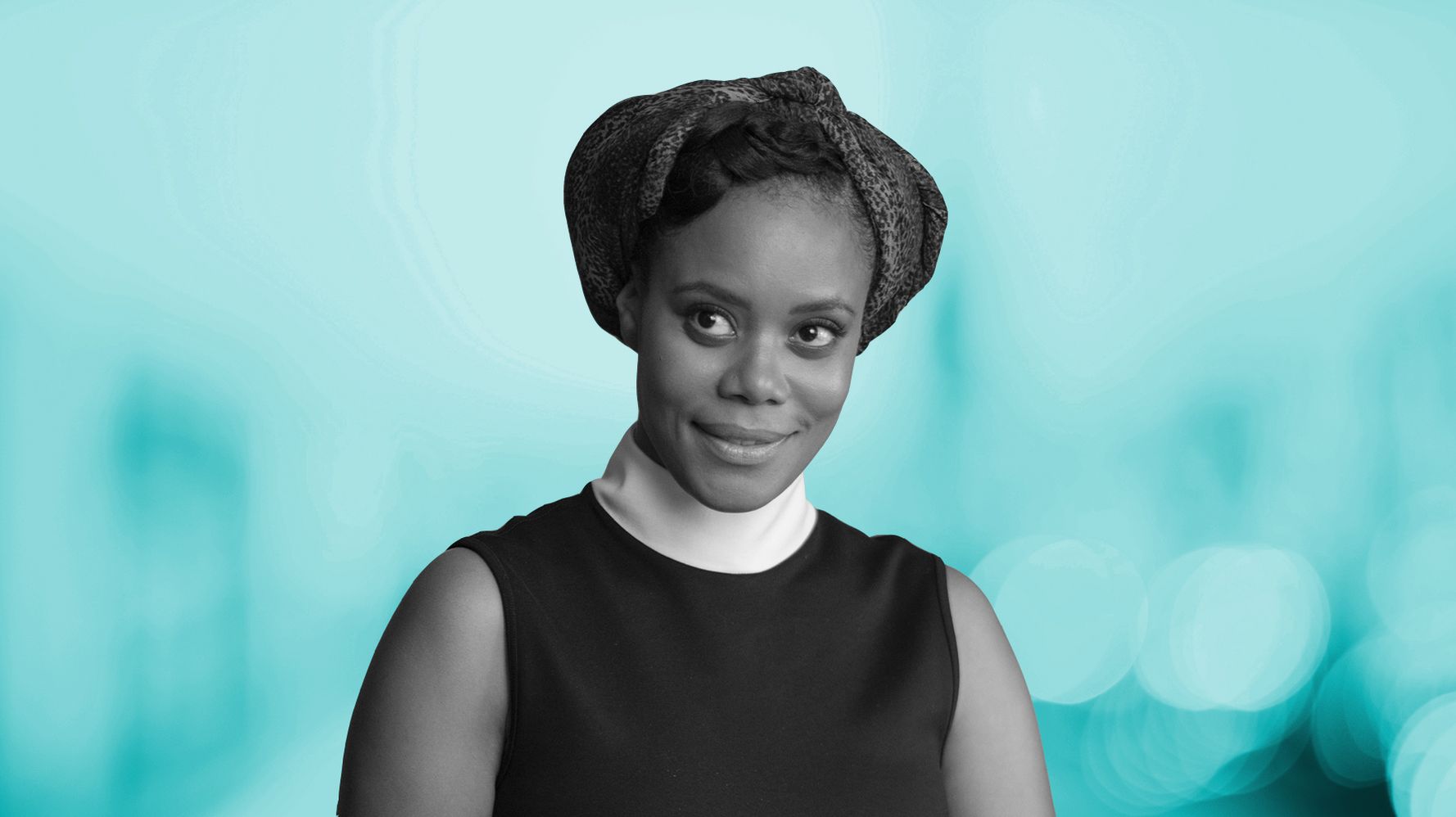 Christina Elmore knows everyone has a lot of opinions about Condola, and she’s happy to be along for the wild ride.

“I don’t get too deep into it because I also just happen to not get too deep into Instagram and Twitter anyway,” she said over Zoom before the start of the fifth and final season of HBO’s “Insecure.” “For the most part, I am laughing with everyone. Like, I think the names for Condola are just hilarious and so creative: Condolences and Condolavirus, Conditioner, Credenza — come on, Credenza?!”

Elmore joined the show at the end of Season 3, when Condola was introduced as a potential mentor to Issa (played by the show’s creator, Issa Rae), who had just quit her unfulfilling job at an education nonprofit and was dreaming of planning a block party to celebrate her neighborhood of Inglewood and spotlight Black-owned businesses. In the Season 3 finale, Issa attends an outdoor movie screening and meets Condola, who organized the event.

In Season 4, Condola helps Issa coordinate the block party, becoming friends in the process. But things get awkward when Issa finds out Condola is now dating Lawrence (Jay Ellis), Issa’s ex. By the end of the season, Issa and Lawrence have reconnected and are maybe back together … but then Condola tells Lawrence she is pregnant.

The drama continues in Season 5. Lawrence has been flying back and forth between Los Angeles, where Condola and the baby are, and San Francisco, where his new job is. In the episode that aired Sunday, Condola and Lawrence have communication issues over how involved he should be in the new baby’s life, resulting in an argument that will definitely have “Insecure” fans taking sides.

Elmore’s process for getting the role — which she thought would just be for a few episodes — was highly unusual.

“For it to have grown into the character that she becomes was such a welcome blessing and surprise from the weirdest audition I’ve ever had,” she said.

Months after her initial audition, Elmore found out she had made it to the next round: a chemistry read. But the catch was that it would be at 8 p.m. the next day, and whoever landed the role would have to start immediately.

“I was like, ‘Uh, never have I ever. Is this real? Am I going someplace to get killed?!’” she recalled. “One of the producers comes out and says: ‘OK, so we’re going to start. Just so you know, whoever booked the role will need to be at work tomorrow morning at 5:30 a.m., so you’ll know tonight before you leave.’”

Part of Elmore’s confusion came from not knowing the chemistry read would be with Ellis because the show’s writers and producers were also trying to keep the plotline under wraps. He’d been out of town and his flight back was delayed, leading to the very last-minute scheduling.

“The script said Condola, and then it would say, the character’s name was Lincoln Washington,” Elmore recalled. “And so it wasn’t until I saw [Jay] walk in with his bags [that I knew], because I kept wondering: ‘Why do they have a character named Lincoln?’”

She vividly remembers how the audition kept getting stranger.

“People start to go in and do their chemistry read, and you come out, and some women are being told to go back to the waiting room. Some are being told: ‘You can go.’ Some have been told to go to some random third room, and no one knows where anyone’s going. It kind of felt like ‘The Bachelor’ — like, ‘you get a rose, you don’t get a rose,’” she said. “By the end of the night, there were three of us sitting in a room together, and we didn’t know if anybody else was in the other rooms, or what was happening. And then slowly, one of the casting assistants was like, ‘OK, come on out,’ to each one of us individually. And I’m the last one in there, so I was like, ‘Is this good? Is this bad?’”

To her relief, she got the role. She waited another hour for approval from HBO executives and had a costume fitting — then showed up bright and early the next morning, still not really sure what to expect.

When Elmore returned for the show’s fourth season, the writers started to tell her more about how Condola would evolve, including that she would be pregnant at the end of the season. But Elmore didn’t fully know where it would fit into the show’s plot — and certainly didn’t anticipate it would become “such a big deal and that people would be so angry and in their feelings.”

“There’ve been a few fan reactions where I’ve been like, ‘OK, you went a little too far,’” she said of people’s very strong opinions about Condola. “But for the most part, it’s just been so fun to be a part of a show that people have included in the culture so much. I think it’s gone way beyond just a TV show. It has a life of its own, and I had never worked on anything like that. It kind of feels akin to, like, how ‘Star Trek’ and all those kinds of things have a universe of their own. This feels like a sort of pop culture universe.”

Both as an actor and as an “Insecure” fan, Elmore said the whole experience has been “a humongous blessing.”

Long before she auditioned for “Insecure,” Elmore had admired what Rae had built, including how she broke the mold with her YouTube series “The Misadventures of Awkward Black Girl” and charted her own path into the industry.

“Watching ‘Misadventures of Awkward Black Girl’ as a theater grad student back in the day was so illuminating for me because I was like, ‘Oh, there’s more than just one way to do this job that I’m prepared to do.’ I don’t have to just wait for some gatekeeper to give me the key,” Elmore said. “She’s disrupting the whole system and making her own thing about a girl that looks and feels like me. So then, to be able to work with Issa and to tell her how I felt about that, and to see that she’s as lovely as I imagined that she would be, and that she’s as much of a creative force as I imagined her to be, but so much more humble and kind than I ever thought she could be — I mean, come on. So just getting to be on that set was already huge.”

One of the many groundbreaking achievements of “Insecure” has been the number of Black people working behind the camera, as Elmore noted.

“I had not seen a set with so many Black people at every position, and never had I ever worked with so many Black [executive producers], and writers, and decision-makers. And that was just mind-blowing,” she said. “When we were discussing hair and discussing makeup, we’re starting from a baseline understanding. I wasn’t having to explain the way my hair works. You come in, and there’s already a comfort level. We walk into the hair and makeup trailer, and you know you’re going to be taken care of. Just those little things. I miss it already. I really do. I think it’s a unicorn. The people who make that show happen are just so dang good and so happy to be there, and the vibes are just right.”

Elmore also stars in BET’s “Twenties,” which just began its second season. She has been shadowing some of the show’s directors, and would like to direct her own episode soon. As “Insecure” wraps up, she hopes its success will continue to make way for more shows in which she can tell stories about people that look and feel like her.

“One of the lessons I’ve learned — also as a fan of the show, and just watching what the show has done for the landscape of TV just in the last five or six years — is that you can tell very specific, authentic stories about very specific groups of people,” she said. “There’s just no reason anymore that a studio executive can say, ‘Well, we just don’t know if other people will like it. We just don’t know if it’ll sell. We just don’t know if it’s relatable. How will it do internationally?’ If you’re telling a good story, and you’re as authentic as you can be, it can be so specific and so relatable. Now, so many other networks are jumping on that bandwagon, and are like, ‘Oh, people do want to see young Black people? Oh, strange.’ And so I think that’s a lesson for the industry in general, but also for my career in that, like, I can choose to do things that feel like me.”

Why The End Of ‘Insecure’ Hits So Close To Home

Issa Rae Explains That Surprise Ending In The ‘Insecure’ Premiere

We Were Rooting For ‘Asian Bae’ On ‘Insecure.’ Now, Alexander Hodge Wants To Make His Younger Self Proud.

TV Diversity Is Improving On Screen. Behind The Camera, It’s Still Mostly White And Male.

Black Firefighter Says His Captain Took Him To Racist Party While On The Job
Kim Potter Apologizes to Daunte Wright’s Family, ‘I Hurt You So Badly’
12 Songs Your Parents Probably Played While Cleaning
5 Things To Know About Saucy Santana’s Rising Career
Patti LaBelle Addresses Drama With Diana Ross & The Supremes