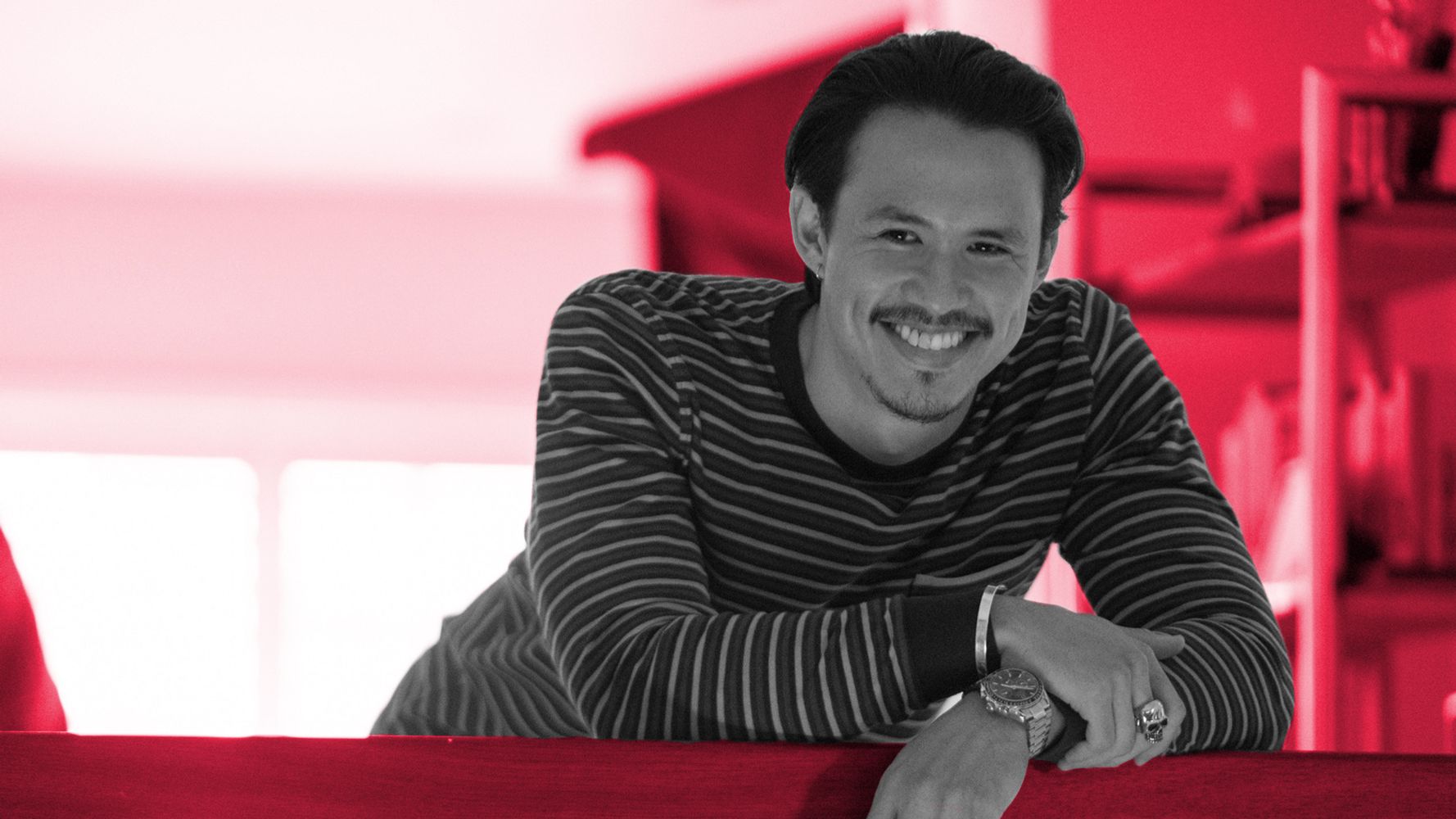 Before he was Andrew, Alexander Hodge was, in his words, “a broke theater school grad” mooching off of his friend’s HBO subscription. After being introduced to “Insecure” in 2016, he instantly became a fan, eventually auditioning in a Season 3 casting call.

That is, until “the jump off.” That’s how Hodge and the “Insecure” cast refer to the Emmy Award-winning series, the launchpad for countless careers. A long way from home in the land Down Under, the Chinese Australian actor is making a name for himself in Hollywood; he’s appeared in “Modern Family,” “Black Lightning” and the Netflix rom-com “Resort to Love.” He’ll soon star in an upcoming feature film directed by Adele Lim.

Formerly a rugby player in Sydney, after a career-ending knee injury, Hodge flew to New York and pivoted to acting. Just five years into the game, his experience on “Insecure” taught him that his individuality, once perceived as a weakness, is really a strength.

“I’ve had to reckon with a lot of things myself in playing Andrew, in being on this journey,” Hodge said. “I’ve said in the past, I did really struggle with people’s perception before playing Andrew and even after. Growing up in a white society, I was never made to feel whole or desirable, or appealing in a romantic sense. This show really forced me to look at that within myself.”

The significance of “Insecure,” which is his first series regular role, is not lost on Hodge. The viewer-turned-standout-star said that now, when he auditions for any project led by a person of color, they immediately express how much they love the series and his character. Hodge is also grateful to be a part of a project that depicts nuanced, authentic portrayals of the joy and messiness that comes with being “a young person who happens to be Black.”

“It truly means the world for the Black women in my life to have a space for joy, to have a space for validation and recognition, to be able to look at a cultural artifact and see themselves, to see the space for them to thrive and it not be about trauma,” Hodge said. “Truthfully, it’s kind of set me up, because now I look for that in every other project, and it’s tough because not every other project can do that.”

Andrew makes his “Insecure” entrance as a friend of Nathan (Kendrick Sampson) in Season 3, Episode 5: “High-Like.” In the episode, Issa and the crew attend Coachella, a few of them indulge in some ecstasy and a messy “Molly-squared” makes an appearance. Andrew immediately takes an interest in Issa’s workaholic best friend, Molly (Yvonne Orji), and despite her attempts to dodge his advances, Andrew gets promoted to boyfriend in Season 4.

And rightfully so. His sleek, sexy man bun, effortless confidence and seemingly endless patience with Molly captivated fans of the show, earning him the moniker of “Asian Bae” and his very own GQ Australia feature. Combating stereotypes of the “sexless” or “emasculated” Asian male and challenging data that relegates Black women and Asian men as the “least desirable” in online dating, Hodge’s character has broken countless barriers.

Hodge is cognizant of his role as an Asian character on a predominantly Black cast; he said he recognizes that “Insecure” is for Black women, first and foremost. If anything, he said, what he’s been afforded is a small piece of a cultural imprint — and what he does with said piece is most important.

“You don’t want a person who receives such appreciation from a community that inherently isn’t theirs to then go on and disrespect that community or, the next day, to do something that undermines that community,” Hodge said. “There is a certain duty of care and respect that goes in giving back and contributing back to the community that gave you a platform in the first place.”

However, humble Hodge doesn’t go around thinking, “I’m ‘Asian Bae.’” He knows he’s not going to represent all Asian men, nor would he want to be the sole face. With the hypervisibility acting brings, though, Hodge understands the power of being placed in a position that people either see themselves in “or other people can learn about someone who may or may not look like me in their life.”

“I can’t allow a study or a statistic … to lord my life and how I’m going to behave,” Hodge said. “I can understand that it informs perception, for sure. For me as Andrew, the thing that I can do is contribute culturally to something that I think will uplift and progress a younger version of myself or someone who might see themselves in me.”

In Season 4, Episode 7, Molly and Andrew take a trip to Puerto Vallarta, where they meet up with his brother Victor (Stephen Oyoung) and sister-in-law Lydia (Camille Chen). The trip comes to a head when Molly attempts to get a towel for Lydia, but a white employee acts “selectively racist” toward her, demanding proof of a hotel keycard. Molly laments about the incident — and an argument ensues when Victor plays devil’s advocate and Molly claims Asians pick and choose when they want to be people of color.

Hodge remembers reading the dialogue in the script alongside showrunner Prentice Penny, and thanking him for allowing Andrew to be the vessel for that conversation.

“The point of view that Molly brings up is something that I’ve thought about for a long time. The Asian community will never be white as hard as some try, but also never be Black as hard as some try. And we’ve seen Asians do both,” Hodge said. “The important thing for me is I want to help my community develop its own identity. I want to help my community find unity, find camaraderie, but also find its own two feet. It’s really important to have these kinds of conversations and to portray these existences, because they are there. To shy away from it is to censor it, and I’m not really interested in that.”

For Hodge, carving out, creating and contributing to stories that allow for expansive Asian roles is paramount. He wants to not only maintain the idealism that motivated him to pursue acting, but also do something that celebrates people who look like those in his family or childhood.

“I wasn’t born into this industry. I was born into a world far away surrounded by Black and brown people and people of all different hues, experiences and identities that were never accounted for in mainstream media,” he said. “Now that I’ve broken into the industry through the back door, it’s important to me to remember the people where I came from and to move in a way that would honor them. I want my younger self to be proud of me.”

In October, it was announced that Hodge landed a role in an unnamed R-rated comedy from Lionsgate directed by Adele Lim. He said working on the film felt particularly special.

“Asian women getting to be like, raucous and dumb and loud and R-rated,” he continued, “This film means the world to me. I want young Asian women to have a cultural touchstone that they can look to that allows them the visibility to not be demure in the way that white society has chosen to perceive Asian women for so long. Within our community, I want a women-led project that puts us on the outside and forces us to look at them through their experience.”

His role in the upcoming movie “very much resembles the genre of which Andrew exists,” Hodge said with a laugh. As he steps into the next phase of his acting career, Hodge is looking for opportunities to expand — but he’s grateful to be here, nonetheless.

“We can go through the amount of Asian leads that should have had expansive, beautiful careers — Paolo Montalban in Brandy’s ‘Cinderella,’ Dante Basco in ‘Hook’ — who for some reason or another, were not able to expand beyond what brought them in the limelight in the first place,” Hodge said.

“I’m grateful to be able to exist in this space while I have it, to be able to represent in a way that we haven’t really been afforded the opportunity to before,” Hodge said. “But I also look forward to a time where we don’t have to fight so hard to do it, and I think that goes across the board.”

Rapper Mystikal Arrested On Charges Of Rape, False Imprisonment
The Problem with the Biopic
Angelica Ross Will Be First Transgender Star Of Broadway’s ‘Chicago’ This Fall
Kevin Samuels Left Us A Final Lesson On The Risks Of Hypertension
City Residents Who Support Neighborhood Schools Are Often Divided By Race And Purpose