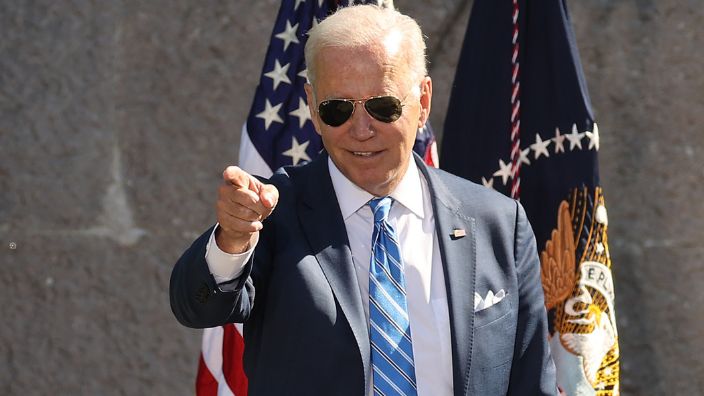 President Joe Biden honored the Martin Luther King Jr. Memorial on its 10-year anniversary in Washington, invoking King’s persistent fight for racial justice and equality as he acknowledged the legislative roadblocks to his policy agenda on voting rights and police reform.

Biden on Tuesday delivered remarks in front of the King Memorial to commemorate the granite statue that is the nation’s only memorial on or near the National Mall dedicated to an African American. The president recalled Dr. King’s role in the years-long movement to rid America of its racism both it its legal code and society, for which he sacrificed his life.

But Biden leads the nation at a time when the very civil rights that King fought to achieve for Black Americans, and all Americans, are increasingly difficult to protect amid the weakening of the Voting Rights Act of 1965 and failed efforts in Congress to pass police reform while Black and brown people continue to be assaulted and killed by police brutality.

“We see the constant push and pull between progress and struggle over the self-evident truth of our democracy. In our nation, we now face an inflection point and the battle, literally, for the soul of America,” said President Biden.

“It’s up to us together to choose who we want to be and what we want to be. I know progress does not come fast enough, it never has.”

He added, “The process of governing is frustrating, and sometimes dispiriting. But I also know what’s possible if we keep the pressure up, if we never give up, we keep the faith.”

Biden and Democrats have been under pressure to pass key legislation that was promised on the campaign trail during the 2020 elections. Black Americans overwhelmingly voted to elect Biden who earned 92% of the Black vote.

Black voters in Georgia notably played a role in handing the state’s electoral votes to Biden — the first time for a Democrat in nearly 30 years. Black Georgians also helped to elect U.S. Senators Raphael Warnock and Jon Ossoff, giving Democrats a razor-thin majority in the U.S. Senate when including tie-breaker votes from Vice President Kamala Harris.

Despite having control of both the White House and Congress, however, Biden and Democrats have failed to pass voting rights bills intended to make voting more equitable after at least of dozen states have passed bills restricting access to the ballot. Additionally, following months of protests by millions across the globe against racially-targeted police violence in the wake of George Floyd‘s murder, negotiations between Democrats and Republicans on a police reform bill in Floyd’s honor has failed.

Biden acknowledged the public frustration over the lack of progress on these legislative issues, but urged Americans to “keep fighting.”

The president also used his remarks to highlight what he believed are key wins for Black and minority communities, including the passing of the American Rescue Plan and the yet to be passed bipartisan infrastructure bill and his ambitious Build Back Better plan, which the Biden administration says will significantly reduce the Black poverty rate and create pathways for economic progress for Black Americans.

Biden also vowed to provide “historic” investment into education for Black students, including Historically Black Colleges and Universities (HBCUs). The president also reserved some time for levity with a humorous shout out to Morehouse College, where both Dr. King and Biden’s senior advisor, Cedric Richmond, graduated.

“In the shadow of the Morehouse Men — I hear a lot about that guys,” Biden quipped, before also acknowledging Vice President Harris and her alma mater, Howard University.

But as the crowd, including an audible Harris, laughed on as President Biden shouted out the illustrious HBCUs, Biden followed up that his hometown’s Delaware State University was indeed the “best HBCU in the country.”

“That’s where I got started,” he said.

See the president’s entire remarks below.