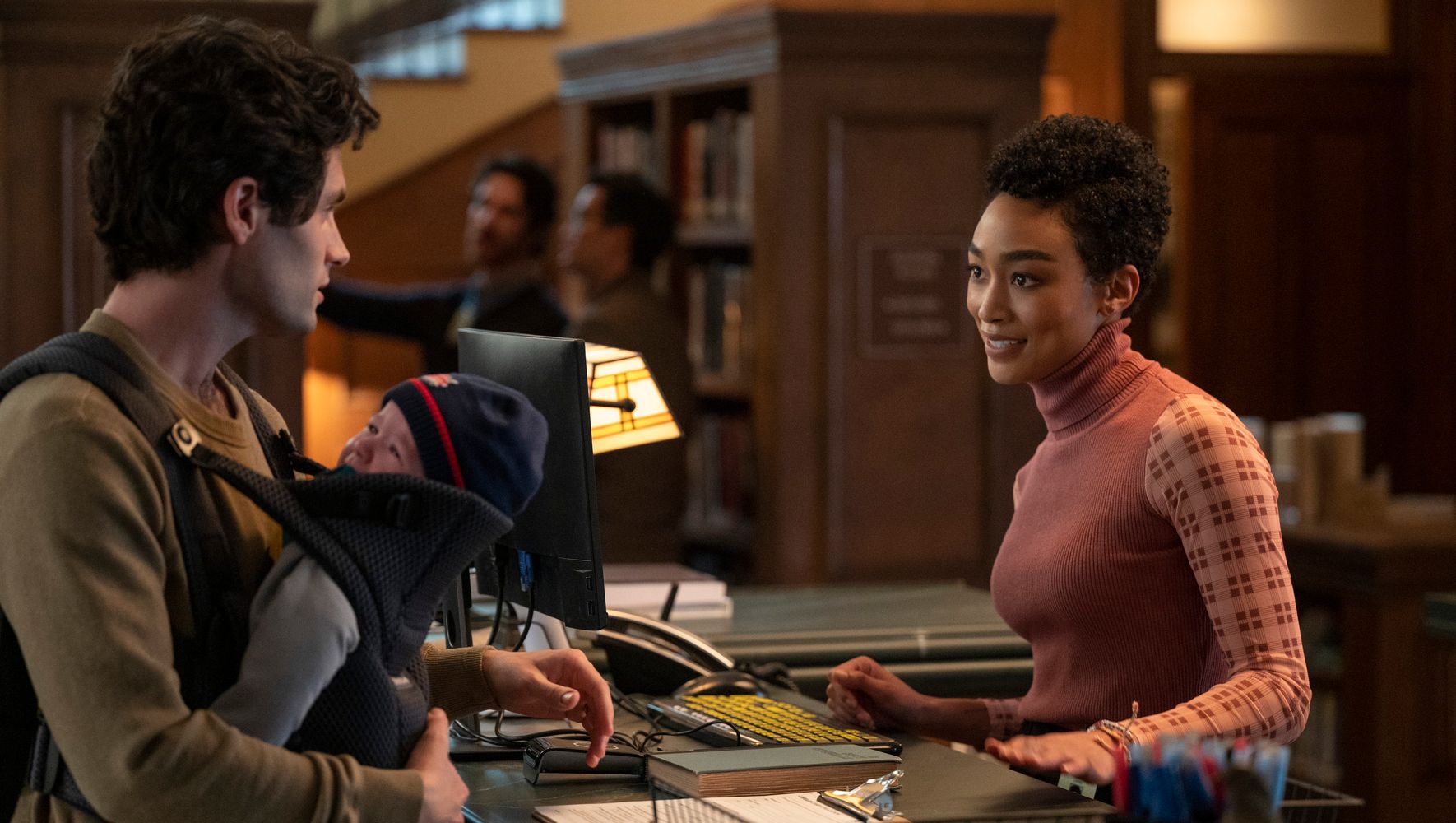 Tati Gabrielle was finally about to go on her first vacation in years when she got a call from her agent. It was about an unnamed Greg Berlanti project, which she had already turned down once.

“About two weeks later, they came back again and were like, ‘They’ve gone through all of their options and they really want to see you for this project,’” said Gabrielle, recalling her agent’s words. “‘They still won’t tell us [what it is], but they want you to do a chemistry read with Penn Badgley.’”

Gabrielle loved the hit Netflix thriller series “You” before joining the cast in Season 3. Like most 25-year-olds, she grew up watching Badgley as Dan Humphrey in “Gossip Girl” during her teenage years. Now, she’d be filming her first sex scene with the early aughts icon, becoming his character’s obsession for the season.

Based on bestselling novel by author Caroline Kepnes, “You” follows bookstore manager Joe Goldberg, who embarks on a blood-stained killing spree, season after season, in the name of doing anything for love. Under the guise of being the unassuming “nice guy,” Goldberg ensnares various women one by one as innocent crushes morph into something more insidious.

That is, until he’s forced to marry Love Quinn. Despite their unholy matrimony, in Season 3, Joe’s wandering eye lands on Marienne Bellamy, a no-nonsense librarian and cautious single mother grappling with addiction and a custody battle.

Following the chemistry read, Gabrielle asked “You” showrunner Sera Gamble if the show would honor her race in the depiction of Marienne.

“I wanted to make sure that there wasn’t this sort of oblivious nature at all to Marienne that I didn’t feel comfortable in playing or just letting so many things go over Marienne’s head. When we speak to our family members or our friends, it’s like, ‘You know dang well, in that horror film, the Black person would have been so much more clued in than that,’” she said with a laugh.

When the news of Gabrielle joining the cast was released on Twitter last year, users assumed her character would finally put an end to Joe’s reign of terror. With previous roles such as Gaia in “The 100” and, recently, the witchy Prudence Blackwood in Netflix’s “Chilling Adventures of Sabrina,” fans were expecting a takedown only a seasoned horror actor like Gabrielle could execute.

The self-proclaimed “biggest scaredy cat in the world” couldn’t watch “Jurassic Park” without cowering in fear until she was 16.

“Horror was never in my scope,” Gabrielle said. “I have two older siblings and when I was 7 years old, they strapped me down and made me watch the original ‘It.’ I was just traumatized for life from that and stayed very far away from horror my whole life prior to doing ‘Sabrina.’”

She continued, “​​I feel like it’s almost like the universe playing a joke on me. But it’s been fun and it has been a really good challenge for me because I’m so the opposite of what the horror genre sort of presents. It does allow me to take a different perspective on life at times, which I enjoy as an actor.”

A theater kid drawn to films, Gabrielle developed a love for acting from watching stories such as “Léon: The Professional” and classics like “Poetic Justice,” but “Colombiana,” starring Zoe Saldana, resonated the most.

“‘Colombiana’ was a really big thing for me when I was a kid, just being able to see a Black woman as an action star,” Gabrielle said. “I am a black belt in karate and did sports my whole life, so to see this kick-ass Black woman go on a vengeance spree was really cool to me.”

Raised by a powerful line of Black matriarchs and HBCU graduates, she grew up attending monthly Jack and Jill of America meetings and watching the women of Alpha Kappa Alpha Sorority, Inc., including her Korean American mother, bond over their sisterhood.

Like her brother who attended Morehouse College, the San Francisco native traveled from the Bay to Atlanta, where she enrolled in Spelman College and studied drama.

“It was really beautiful being a part of the drama department at Spelman. Being able to do all of these Black plays — August Wilson is one of my favorite playwrights — it’s a different kind of energy,” Gabrielle said. “There’s a different kind of vitality that’s in Black creative work, especially doing certain plays and things. There’s this added sort of layer of celebration through struggle.”

But then, depression and anxiety set in during her sophomore year.

“While I did very much enjoy my time at Spelman,” she said, “within the little society that we’ve built, there’s still division somehow. In this place that was built and created for the [uplifting] and betterment of Black people, we are still able to find division within ourselves and put one another down or create some sort of elitist or classist society. That really started to get to me my second year. I was like, I need to find a way to shake myself out of this.”

Then, a call came from her best friend, inviting her to come to Los Angeles. When she was younger, Gabrielle always said she wanted to be a working actor before age 20 — so she took the leap of faith.

Since then, Gabrielle has taken on a variety of roles, from The CW to Disney and more. Yet to prepare to portray Marienne, she had to get in a different headspace to fully understand what it means to be a mother fighting for her child.

“I was able to speak to a mother, who … lost her child due to her own addiction. On the side of her being a recovering addict and trying to find a new path, I have family members who have gone through addiction and rehab,” she said. “That was something that was not foreign to me at all. I had to dig deep for that to sort of inform little moments with Marienne and her struggle within herself.”

Apart from playing Marienne, Gabrielle loved working with Penn Badgley. Though she was admittedly nervous when it was time to film the more racy scenes, Badgley reassured and comforted her.

“I loved working with Penn. He’s so compassionate, so giving, so generous,” she said. “As an actor, he’s very communicative, which is something that I really appreciate. When it got to our sex scenes … I came on set that day like, ‘Penn, I’m gonna be so honest with you. I’m so nervous right now.’ He was like, ‘It’s gonna be OK. We’re going to talk through it.’”

The unifying thread Gabrielle has noticed in each of her roles is the trauma and struggle that each character has overcome. When people look at Marienne, Gabrielle wants them to be able to see that women are the creators of their own destiny, not “some man that we decided to invite into our lives.”

As much as she loves triumph, Gabrielle hopes to create her own projects and stories that focus on Black celebration.

What ‘Sex Education’ Gets Right About Black Queer Stories

The Most Popular Shows On Netflix Right Now Besides ‘You’

‘Tourists’ In Our Own Homeland
Why High-Profile Convictions Are So Traumatizing For Victims Of Sexual Abuse
The Top Iota Phi Theta Graduation Photos of Spring 2022
James Pickens Jr. (1954- )
Travis Scott Pauses Show As Fans Climb On Venue Structure