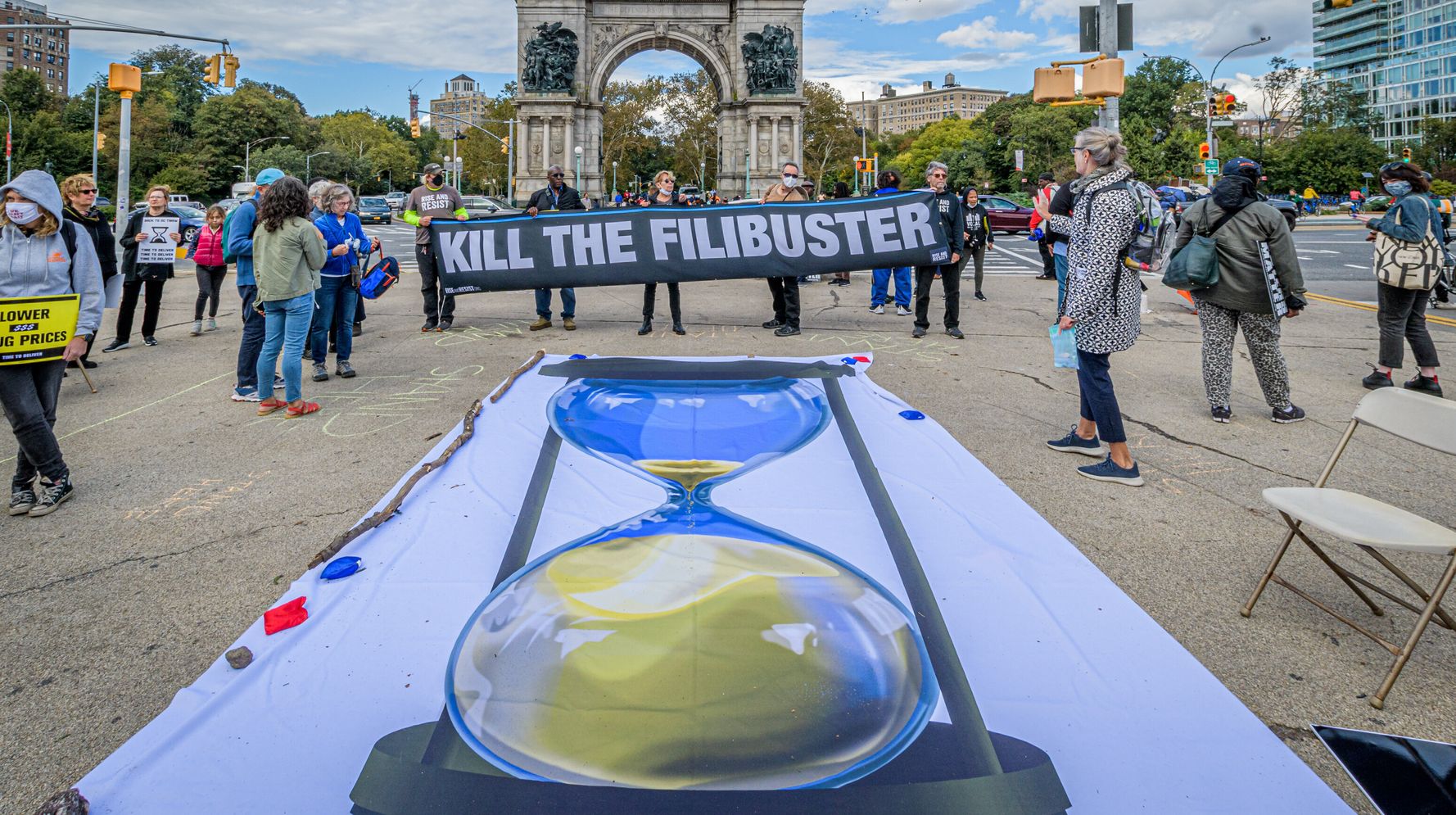 The party-line vote blocking debate on the Freedom to Vote Act came after months of negotiations among Democrats to craft a compromise voting rights bill that Sen. Joe Manchin (D-W.Va.) claimed could get Republican support. But Manchin failed to convince a single Republican to support the bill, let alone allow the Senate to debate the bill.

“Let there be no mistake: Senate Republicans blocking debate today is an implicit endorsement of the horrid new voter suppression and election subversion laws pushed in Republican states across the country,” Senate Majority Leader Chuck Schumer (D-N.Y.) said on the floor after the vote.

It is now up to the 50 members of the Senate Democratic caucus to decide whether or not to change the Senate’s filibuster rules to provide a path forward on what Democratic leadership has called must-pass voting rights legislation.

There’s expected to be a caucus-wide debate on whether Democrats should change filibuster rules to pass the Freedom to Vote Act and other voting rights legislation such as the John Lewis Voting Rights Advancement Act, which would restore sections of the Voting Rights Act of 1965 gutted by the conservative Supreme Court. The changes most likely to be debated include a carve-out solely for voting rights legislation and the reintroduction of a form of talking filibuster.

Democratic Party leaders have already hinted that they will look at potential rule changes in the event that Republicans do not join them in expanding voting rights.

“Everything is on the table,” Schumer said in March upon introducing the first version of the Freedom to Vote Act, then called the For The People Act.

“We will see if our Republican friends join us,” he added. “If they don’t join us, our caucus will come together and decide the appropriate action to take. Failure is not an option.”

Since Republicans have not joined Democrats in even allowing a debate on voting rights legislation, Schumer said that Democrats will have to go it alone. He analogized this moment to the post-Civil War Reconstruction period, when the Republican Party passed the 13th, 14th and 15th amendments abolishing slavery and enshrining civil rights for Americans of all races into the Constitution with zero votes from the Democratic Party.

“Today we feel the same way,” Schumer said, adding, “The question before the Senate is how we will find a way forward in protecting our freedoms in the 21st century.”

As for the filibuster, Schumer did not directly address it but claimed that continued obstruction by Republicans prevents the Senate from operating as it was originally intended.

“The Senate needs to be restored to the status of the world’s greatest deliberative body,” Schumer said.

Restoration of the Senate emerged as the theme of Democratic calls to change filibuster rules to enable the passage of voting rights bills after Wednesday’s vote.

“We must restore the Senate so we can work together in the way the founders intended to take on the challenges facing our democracy,” Sen. Amy Klobuchar (D-N.Y.), a lead co-sponsor of the bill, said in a statement.

Sen. Raphael Warnock (D-Ga.), also a lead co-sponsor of the bill, said in a statement, “I look forward to connecting with my Democratic colleagues over the coming days and weeks to discuss the next steps we must take to restore the Senate and pass both the Freedom to Vote Act and the John Lewis Voting Rights Advancement Act.”

“Congress must pass voting rights, no matter what,” he added.

″[I]f the Republican blockade continues, we may need to restore Senate rules that allowed consideration of overwhelmingly popular bills like this one,” Sen. Sheldon Whitehouse (D-R.I.) said in a statement.

We need to find another path.

Our fundamental right to cast a meaningful vote and have a say in the big decisions that impact our lives is on the line.

I’ve been pushing to restore our broken Senate for years, and there has never been a more critical moment to get this done.

President Joe Biden released a statement in support of the bill prior to the vote, though he did not mention the filibuster.

“The right to vote — to vote freely, to vote fairly, and to have your vote counted — is fundamental,” he said in the statement. “It should be simple and straightforward. Let there be a debate and let there be a vote.”

Biden previously called the passage of national voting rights legislation “a national imperative.” But he has stopped short of openly campaigning for the bill or engaging in behind-the-scenes negotiations on the bill or possible filibuster rules changes as he has done for his domestic economic agenda. He has stated his opposition to eliminating filibuster rules for all legislation but has endorsed the idea of bringing back some form of talking filibuster.

“If Republicans cannot come forward and stop standing in the way, if they can’t support strengthening, protecting the fundamental right to vote, then Democrats are going to have to determine an alternative path forward,” Psaki said.

But Democrats need all 50 members of their caucus to support such changes, and two, Sens. Kyrsten Sinema (D-Ariz.) and Manchin, have publicly expressed their opposition to changing the filibuster rules throughout 2021. Democratic leadership and the public will need to convince them that protecting voting rights is more important than their support for existing Senate rules.

The importance of enacting new voting rights protections is driven by Trump’s unprecedented efforts to overturn his 2020 election loss by lying about how the election was conducted, culminating in the Jan. 6 insurrection at the U.S. Capitol and the conservative Supreme Court’s increasing hostility to voting rights.

While Trump’s campaign to disenfranchise millions of voters and overturn his loss failed, it inspired Republican state legislatures to pass legislation enshrining his lies into laws by making it harder for communities who disproportionately vote for Democrats to cast their ballots. Trump’s lies have also inspired Republican candidates to run for office on the promise that they would abide by his desire to subvert democratic elections by refusing to certify any outcome other than his victory.

The Freedom to Vote Act would override many of the restrictive voting laws passed in Republican states by setting baseline standards for voter access, with mandates for at least 15 days of early voting, automatic, online and same-day voter registration, and minimum standards for mail-in voting.

The bill also allows voters casting provisional ballots to do so at any polling location. It combats the threat of election subversion by partisan legislatures by setting national standards for the removal of local election officials and creating a judicial review process disfavoring restrictions on voting. The bill also includes provisions limiting partisan gerrymandering and reforming campaign finance laws.

The bill is a slimmed-down version of the House-passed For The People Act. It was drafted by Sens. Jeff Merkley (Ore.), Jon Tester (Mont.), Angus King (Maine), Tim Kaine (Va.), Alex Padilla (Calif.), Klobuchar, Warnock and Manchin in order to secure Manchin’s support after he announced his opposition to the original For The People Act in June.

Manchin’s deep involvement in drafting the Freedom to Vote Act leaves many bill supporters wondering why he would invest so much time in this process if he were only to let his bill fail at his own refusal to change the filibuster rules.

Democrats are expected to continue internal party negotiations over how to pass voting rights legislation through November, at least. The John Lewis voting rights bill may come to the floor next week, Schumer said, and will likely be filibustered by Republicans. Whether Democrats decide to protect voting rights amid an unprecedented assault led by Republicans inspired by Trump will be determined in the coming weeks.

Ashanti Recalls Pervy Producer Asking Her To Shower With Him Or Pay $80,000 For Songs They Recorded Together
Shanquella Robinson: Mexican Authorities Request Extradition Of ‘Friend’ Allegedly Responsible For Death
GMA’s T.J. Holmes Praised Wife’s ‘Built-In Black Woman Superpower’ For Not Leaving Him Two Years Before Cheating Scandal With Amy Robach
Do I, Or Don’t I Go Home For The Holidays?
Kanye West Slams Obama In New Interview, Says ‘We Got To Stop Dissing The Nazis All The Time’