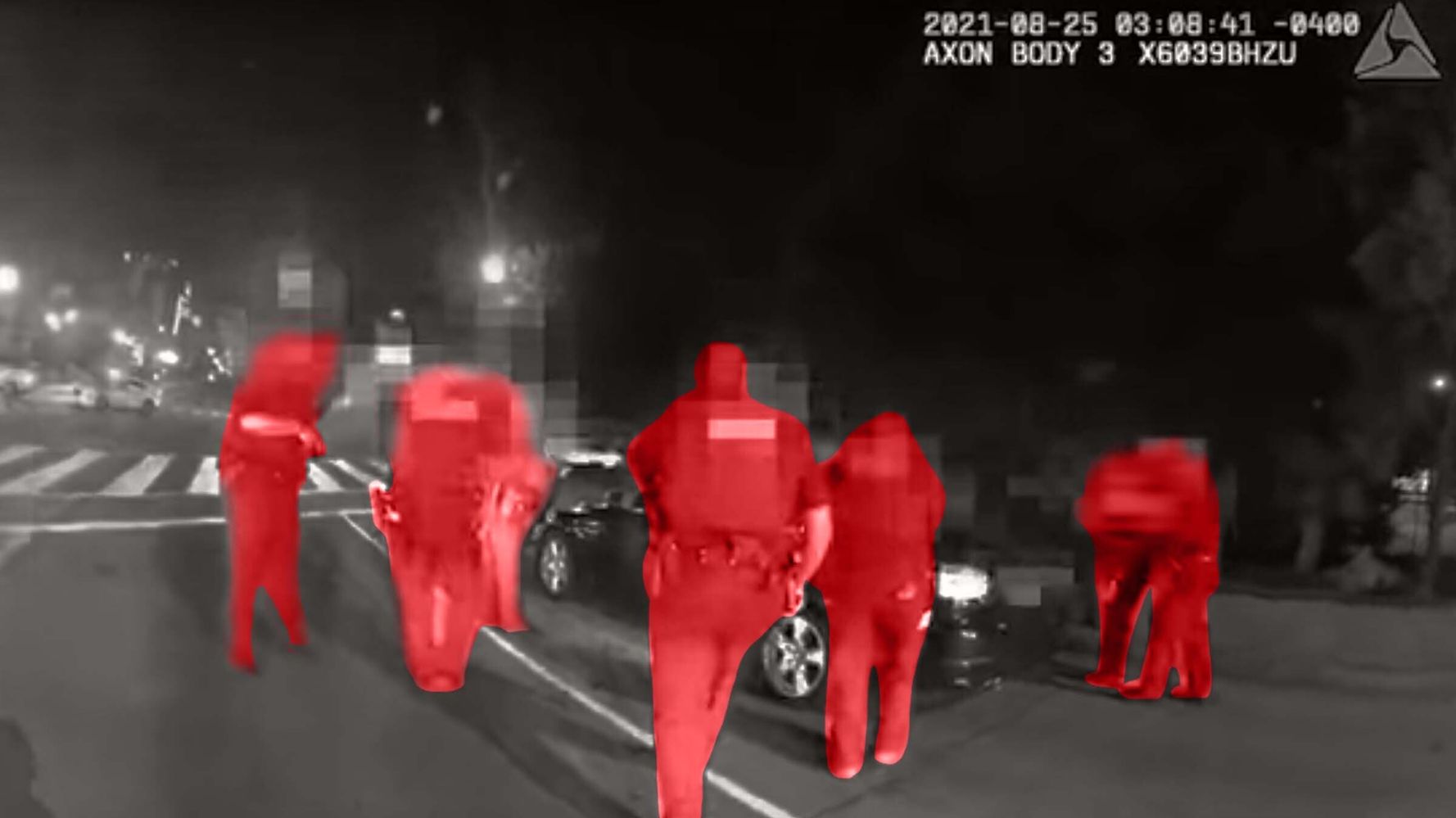 In the early hours of Aug. 25, where Florida and New York avenues meet in northeast Washington, D.C., police approached a person who was either sleeping or unconscious in an idling car.

They found An’Twan Gilmore, a 27-year-old Black man, “unresponsive,” his foot on the brake pedal. Police say there was a gun visible in his waistband.

Body camera footage shows officers knocking on the door of Gilmore’s black BMW. The car is surrounded by at least five officers. One of them says “Where is the gun at?” again and again. He tells other officers to move back from the car because they might “scare him.”

The officer then says he “can’t see his hands” and tells his colleagues to knock on the window. Officers attempt to rouse Gilmore, and the car moves forward slightly. Police shout “Don’t move!” repeatedly, and the car stops.

But then the car moves forward again — and almost instantly, police begin shooting. In less than a second, one officer, later identified as Enis Jervic, fired multiple shots at Gilmore at close range. Gilmore was shot a total of 10 times. The car kept moving forward and eventually came to a stop at the end of the street, where police had blocked the path with at least two squad cars.

Officers took Gilmore to an area hospital, but he died from his injuries.

The gun that Gilmore had on his person was recovered from his waistband after the shooting. Officers say they’re unsure if Gilmore ever actually removed it from his waistband. The investigation is ongoing, police told HuffPost.

D.C. residents protested Gilmore’s shooting, calling for justice and answers about his death. Elected officials spoke out, too. Noting that a white man had previously threatened to blow up the Capitol building but was safely taken into custody, Janeese Lewis George (D), a member of the Council of the District of Columbia, drew comparisons between the two incidents.

“Sitting here trying to figure out how law enforcement can successfully de-escalate a white domestic terrorist in a truck threatening to blow up the Capitol with a bomb but not a Black man who fell asleep in his car?” George wrote on Twitter the morning after Gilmore was killed.

The D.C. police department’s policy prohibits officers from firing at or from a moving vehicle “unless deadly force is being used against the officer or another person.” The policy adds that officers should “avoid tactics” that would place them in a position where the vehicle would be used against them. Several other police departments have similar guidelines regarding use-of-force tactics where moving vehicles are involved. But as Gilmore’s death shows, having a policy in place doesn’t always prevent these types of shootings.

Policing experts say the tactic is terrible for self-evident reasons: Shooting into a moving vehicle isn’t productive for police, and often leads to more harm than good, causing further tension between local police departments and the surrounding communities.

Gilmore is not the only person to have been killed by a police officer while inside a moving vehicle in recent years. The tactic has left several marginalized communities outraged, and has become a reference point for the nationwide movement for police reform.

In April, deputies in Elizabeth City, North Carolina, fatally shot Andrew Brown Jr. while attempting to serve a drug warrant. Video from the shooting shows Brown trying to drive away from officers. He was shot five times, including in the back of the head.

The policy of the Pasquotank County sheriff’s office is that deputies should avoid firing their weapons in these situations, as it is “rarely effective.”

However, the Pasquotank County district attorney ruled the shooting justified.

Brown was killed on April 21, the day after former police Officer Derek Chauvin was convicted of murdering George Floyd in Minneapolis. Protesters took to the streets when they found out no deputies were charged in Brown’s killing, with demonstrations lasting for at least a week.

Ten days before Brown’s death, Daunte Wright, a 20-year-old Black man, was fatally shot just outside Minneapolis during the Chauvin trial. Wright was killed after he was pulled over for a traffic violation. He got in a struggle with an officer after returning to his vehicle. Body camera footage shows the car moving away from the officers after the shooting.

The officer who shot Wright claimed she mistook her firearm for a stun gun. Minneapolis police do not have a policy to address police shooting into moving vehicles.

In 2017, Jordan Edwards was killed by Balch County police Officer Roy Oliver in north Texas as he was driving away from a party. Oliver was charged with murder and sentenced to prison the following year. Edwards was 15.

The tactic has been long frowned upon

Chuck Wexler, executive director of the Policing Executive Research Forum, said his group stresses that police should not shoot into moving cars.

“Cops were shooting at moving vehicles, stolen cars [in prior decades]. Today, police departments are taught not to shoot at cars and whatever you do, don’t move in front of the vehicle,” Wexler said. “You can’t shoot into a moving vehicle unless the force used is something other than the moving vehicle.”

Of those policies, 55 were in place prior to June 2020, according to Katie Ryan, campaign manager of Campaign Zero. Sixty-four policies have been enacted since the murder of George Floyd and since Campaign Zero began its “8 Can’t Wait” initiative, which includes demands to ban shooting into moving vehicles. For example, in January, the office of police oversight in Austin, Texas, made recommendations to reconstruct the police department’s general orders based on the group’s review.

Ryan said there wasn’t any reason for Jervic, the officer who shot An’Twan Gilmore, to have fired his weapon.

Wexler said there are still departments throughout the country that do not have a policy in place for firing at moving vehicles, and it “causes unnecessary shootings,” putting many people at risk.

New York City has had a policy against shooting into moving vehicles for 50 years, Wexler said. Civilians face a risk of being injured or killed if a cop shoots a person inside a car and the driver can no longer control the direction of the vehicle.

However, the policy didn’t prevent Sean Bell’s death. In 2006, New York Police Department officers fired 50 rounds at Bell’s car outside a Queens strip club. Bell died, while his friends were severely injured. Three cops went to trial for manslaughter, but were acquitted.

According to some accounts, Bell was speeding toward officers ― though there are multiple conflicting statements about what happened that day, and since it was an era before widespread use of body cameras, there is no definitive record. Gilmore, however, was driving away from police slowly, which was not sufficient reason for a shooting to occur, experts say ― adding that officers shouldn’t have positioned themselves so close to the vehicle when they arrived on the scene.

“The issue is really a tactical one for policing,” said Seth Stoughton, an associate professor of law at the University of South Carolina and former officer with the Tallahassee, Florida, police department. “If police are going to respond when they are on the scene, they have to do it safely.”

In D.C., Gilmore’s death has further damaged the relationship between police and the local community, only a year after mass demonstrations were held following the killings of Floyd and Breonna Taylor.

But the Metropolitan Police Department says it supports “an open and trusting” relationship with residents of the district.

“More than 3,200 body-worn cameras are deployed to full-duty officers and sergeants in public contact positions, and they are required to be activated on every scene,” Alaina Gertz, public affairs specialist with the city’s police department, told HuffPost in a statement. “Officer conduct and uses of force are subject to external review by the independent Office of Police Complaints or the U.S. Attorney’s Office, each of which has direct access to all body-worn camera videos … MPD is committed to ensuring that each police interaction meets its high standards for fair and constitutional policing.”