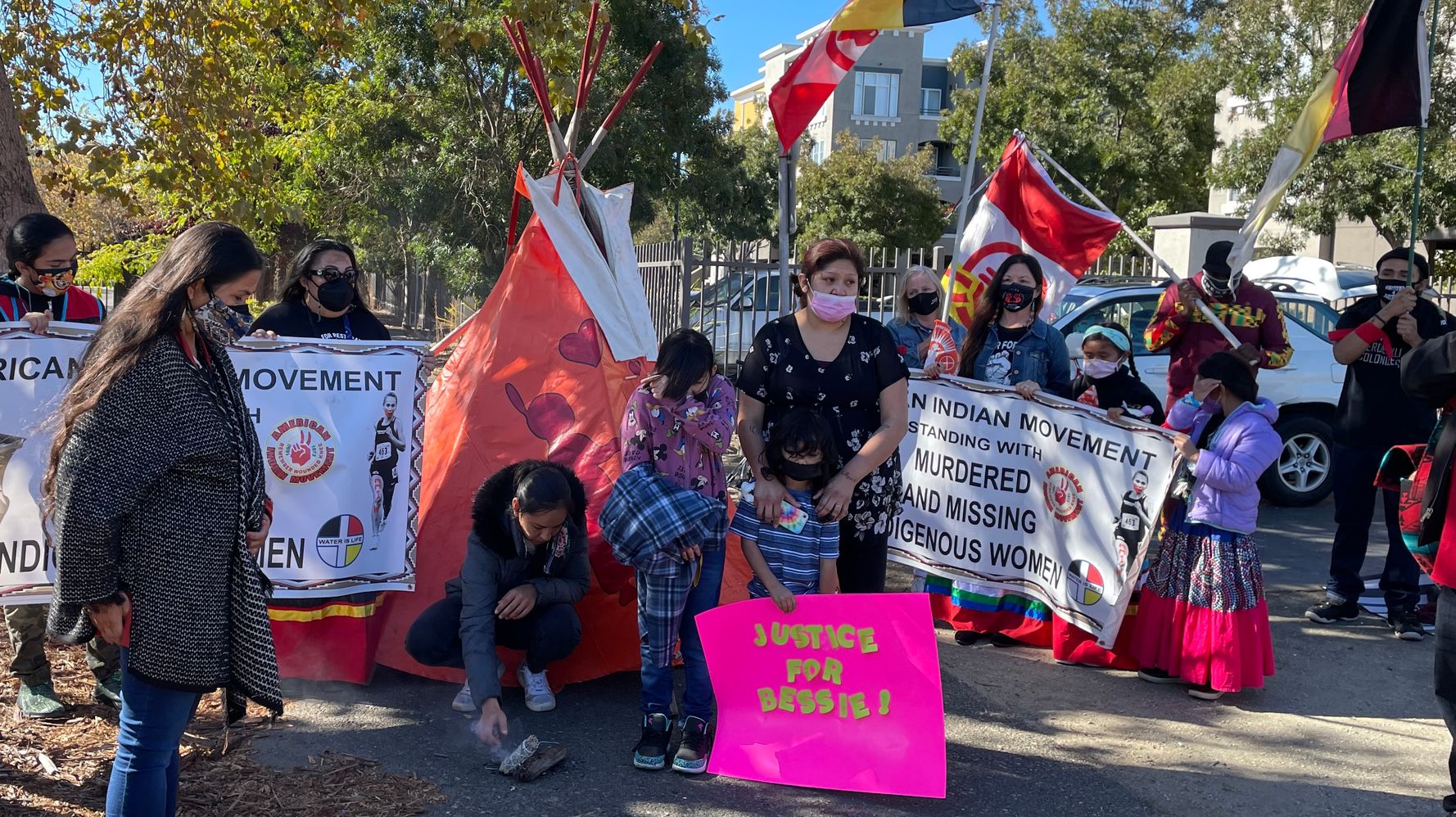 OAKLAND, Calif. — The family of Bessie Walker — a 27-year-old mother who went missing for weeks before being found dead in August — held a rally Tuesday, calling attention to missing and murdered Indigenous women, who don’t garner nearly the same news coverage or police response that missing white women do.

“We spent hours and nights without sleeping looking for her,” Ruby Rodriguez, Walker’s older sister, said at a protest and press conference in Oakland. “We don’t have peace.”

“My family just wants answers. They want justice,” Rodriguez said, crying. “How come no arrests have been made?”

Rodriguez was surrounded by around two dozen family and friends of Walker’s, as well as Indigenous organizers and allies who wore bandanas with the letters MMIW — for Missing and Murdered Indigenous Women — and T-shirts that said, “No more stolen sisters.” Rodriguez’s two young children held a pink sign with yellow glued-on letters that read, “Justice for Bessie.”

Walker — a mother of three kids ages 12, 7 and 4, and a member of the Big Sandy Rancheria tribe — was reported missing from her hometown in Auberry, California, on Aug. 8. Two weeks later, her family found her dead about 100 yards from a family member’s home, according to the sheriff’s office.

At the rally, Walker’s sister condemned the Fresno County Sheriff’s Office for not doing more to find Walker while she was missing. “Nobody talks about it anymore. The sheriffs don’t tell us nothing. Why wasn’t there more done?” Rodriguez said through tears.

The sheriff’s office told HuffPost that detectives spent “hundreds of hours” searching for Walker, calling the family’s criticisms “unwarranted.” Walker’s cause of death remains “undetermined.” The sheriff’s office hasn’t posted publicly about the investigation since August.

Rodriguez said her family’s next step will be to file a lawsuit against the sheriff’s office.

At the rally, local organizers with social justice group CURYJ condemned the outsize attention paid to Gabby Petito’s case — also a woman in her 20s who went missing before being found dead, but who was white. Petito, reported missing Sept. 11, was found dead less than 10 days later.

While Petito’s case got wall-to-wall national news coverage on every development in her case (including from HuffPost), Walker’s case was only covered locally, not in nearly as much detail.

“We’re here to denounce the racism and erasure of Black, Indigenous and people of color,” said George Galvis, co-founder of CURYJ. “We’re not saying it’s not good to investigate Gabby Petito. What we’re saying is Black and Indigenous women deserve the same level of investigation and they deserve the same attention from the media.”

Thousands of women and girls of color disappear each year across the country, many garnering little to no public attention.

A recent report on missing or murdered Indigenous women by the nonprofit Sovereign Bodies Institute found that in California, just 9% of murder cases involving Indigenous women and girls were solved, compared to a statewide rate of over 60% for solving murders, per CalMatters.

Walker’s family held Tuesday’s rally outside local Fox TV station KTVU, which suspended anchor Frank Somerville last month, reportedly over disagreements with his superiors about his wanting to add a note to a segment on Gabby Petito to highlight how Black women are disproportionately victims of domestic violence and get less attention than white women gone missing — or what late journalist Gwen Ifill dubbed “missing white woman syndrome.”

KTVU did not immediately return HuffPost’s request for comment.

“May the words we speak today help someone somewhere,” Indigenous organizer Lyla June Johnston said in a prayer at the start of the rally, as sage burned. “We ask you to protect our women.”

“Bless our enemies, bless the people in the news studio behind us,” Johnston added. “Bless those who don’t see us as human and help them understand they are our family.”