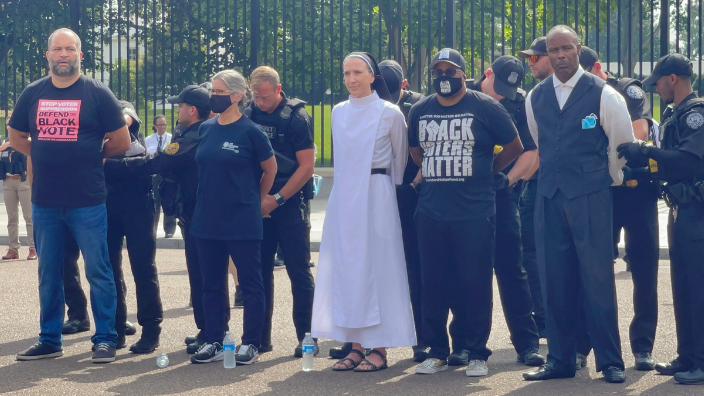 Voting rights activists — including a pastor, nun and an architect of the Souls to the Polls movement — were arrested Tuesday during a peaceful protest in front of the White House.

The small group started their demonstration around Black Lives Matter Plaza in Washington, D.C., and ultimately crossed the barrier at the White House, resulting in them being criminally charged by the United States Secret Service.

Ben Jealous, president of People For the American Way and former national president of the NAACP, was among those arrested. Before his arrest, Jealous told TheGrio that the mission of the demonstration on Tuesday was to compel President Joe Biden to “call on the Senate to remove the filibuster as an obstacle in passing voting rights.”

The filibuster, a parliamentary procedure in the U.S. Senate used to delay or block a vote on a bill (usually by the political party in the minority), has been used for decades. The filibuster has been amended by both Democrats and Republicans to allow a simple majority for presidential nominees, judicial appointments and Supreme Court confirmations, rather than the two-thirds majority the filibuster requires for most legislation in the 100-member Senate chamber.

As Jealous also notes, “every president has used the carve out in the filibuster in recent history to pass the budget bill.”

The recent arrests outside the White House also happens to fall on National Voter Education Week, as well as the eve of United States Senate debate on the John Lewis Voting Rights Act scheduled for Wednesday.

On Instagram live, after Monday’s hours-long social media outage, Stephanie Young, executive director of When We All Vote, posted an explainer about this week observing the need for American citizens to have the tools and information needed to exercise their constitutional right to vote — especially as Congress prepares to take action Wednesday on voting rights.

In her post, Young explained that the John Lewis Voting Rights Act, “helps to end voter suppression and create protection for voters in states with a history of discriminating against voters.” She challenged the American public to call their respective U.S. senators to “take action and protect their right to vote.”

The Voting Rights Act of 1964 has taken several hits with two Supreme court decisions in the past few months and in 2013 with the Shelby vs Holder decision. What’s more, many states have passed or introduced restrictive voting laws that prohibit things like giving food to would-be voters waiting in long lines at the polls and even banning Sunday voting in some areas. This November, 35 states will hold elections as many in the country are voting without the full protections of the Voting Rights Act.

So what is the White House doing on this critical issue that is part of the President Biden’s so-called Black agenda, even as it impacts all Americans?

Voting rights will be the topic of discussion between Vice President Kamala Harris and heads of the Divine Nine, historically Black Greek Fraternities and Sororities, on Wednesday. During the 60-minute session, jobs and the pandemic are also expected to be discussed.

Harris’s vice presidential portfolio of work contains voting rights. Bakari Sellers, a friend of Harris, however, called the vice president’s portfolio “trash” during Politics and Prose‘s Monday panel “Race in America.” President Biden, Sellers argued, is not leaning in on what it takes to get H.R. 1, H.R 4 and S. 1  passed.

“You give someone a portfolio that is not meant for them to succeed,” Sellers said of Biden’s work delegation to Vice President Harris. “I think that if you give her a portfolio that has voting rights and you [President Joe Biden] actually push to reform the filibuster,” he added, Harris could actually be successful with her tasked portfolio, which also includes the root causes of immigration from Central America to the U.S. border.

Sellars, the bestselling author of “My Vanishing Country” and a CNN pundit added, “[Joe Biden] did not give her something where she would be successful.”

Keith Boykins, best-selling author of the book “Race Against Time,” said during that same discussion, Vice President Harris is in a “bad position” because “she is working for an administration that is not aggressively pushing a pro-Black agenda.”

“I don’t think she’s going to necessarily be successful in 2024 or 2028 in reaching out to Black voters if she’s tied to a Biden administration that is incapable of accomplishing anything for Black people,” he said. “That’s a fundamental problem she’s facing.”