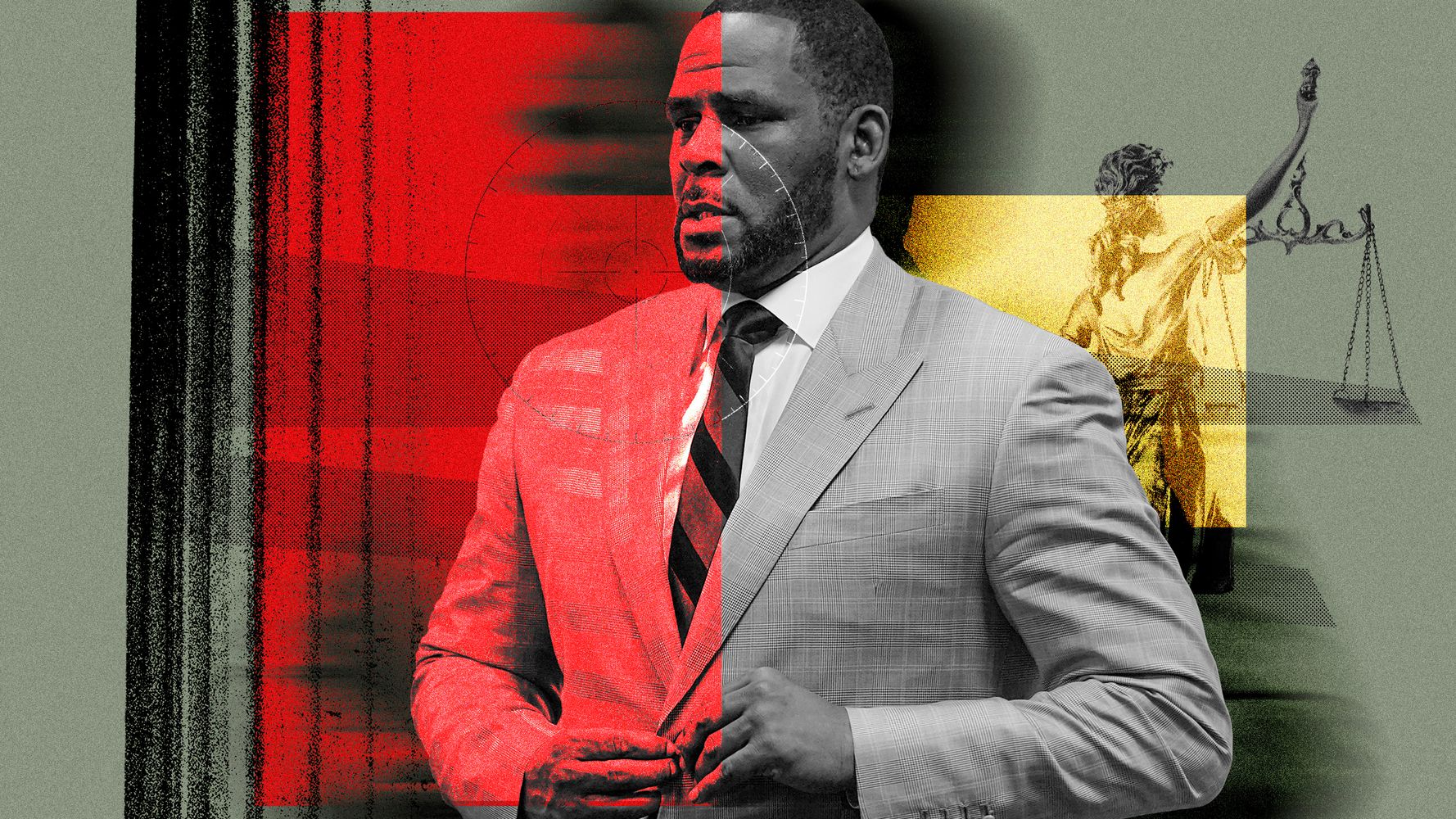 NEW YORK ― R. Kelly, the R&B singer who rose to fame in the 1990s, has been found guilty on all charges related to racketeering and sex trafficking after a trial at the Brooklyn Federal Courthouse.

After nine hours of deliberation, a jury of seven men and five women found Kelly guilty on one count of racketeering and eight counts of violating the Mann Act, which prohibits transporting individuals across state lines for the purpose of prostitution.

Kelly was wearing a dark blue suit with pinstripes and a light blue tie as the all-guilty verdict came in. The R&B singer showed little emotion and kept his head down while wearing a white mask to protect himself from COVID-19.

The verdict came in around 3:15 p.m. Eastern on Monday afternoon during the seventh week of the trial.

“Today’s guilty verdict forever brands R. Kelly as a predator who used his fame and fortune to prey on the young, the vulnerable and the voiceless for his own gratification,” Jacquelyn Kasulis, the acting United States attorney for the Eastern District of New York, said during a press conference after the verdict came in.

“We’re disappointed with the verdict,” defense attorney Deveraux Cannick said outside the courtroom. When asked if the defense would appeal the verdict, Cannick responded: “I’m sure that’s something we’ll be considering.”

Sonja, one of the survivors at the center of the case, issued a statement after the guilty verdict, writing that she was “thankful the jury listened to us.” “I’ve been hiding from Robert Kelly in fear, due to threats made against me, and I’m ready to start living my life FREE from fear, and to start the healing process,” she wrote.

Gloria Allred, who represented three of the six victims centered in the case, issued a statement following the announcement of the verdict.

“Mr. Kelly who once described himself as a ‘genius’ to one of my clients, is nothing but a convicted felon,” the statement read. “R. Kelly thought he could get away with all of this, but he didn’t, because despite the fact that he thought he could control all of his victims, he was wrong.”

Several of Kelly’s supporters rallied outside of the courthouse after the verdict was announced while playing his music, a few with tears flowing down their faces. Among them was 36-year-old DeAngelo Brewster, who identified himself as the singer’s godson and said he’d traveled from Chicago for the trial. He told HuffPost that he was “shocked” by the jury’s decision and is hoping for an appeal.

“I think that the prosecutors used a lot of these witnesses’ stories without any type of evidence to back up their stories, just he-say, she-say, and they’re gonna try to convict a man off of that,” he said, comparing Kelly to the disgraced actor Bill Cosby.

During the trial, which began in mid-August, the jury heard testimony from 50 witnesses; 45 were called by the prosecution and only five were called by the defense. Out of the 45 witnesses who testified for the prosecution, 11 were accusers, six of whom testified they were underage when Kelly first abused them. Witnesses for the defense included a former security guard, Kelly’s accountant and an up-and-coming artist who says he worked with Kelly for over a decade.

The testimonies of the eight Jane Does and two John Does were the most memorable parts of the trial. Nearly all of the accusers described a terrifying environment of control and fear when they were in an abusive relationship with the R&B singer. Several testified that Kelly had implemented strict rules that included calling him “Daddy,” subjected them to physical beatings, and controlled the clothes they wore, what they ate and where they were allowed to travel. One Jane Doe said Kelly punished her by making her smear her own feces on her face and in her mouth as he recorded her.

“He could put the fear of God in me very quickly,” one victim said of Kelly during her testimony.

The six Jane Does at the center of the government’s case were referred to as Stephanie, Sonja, Jerhonda, Jane, Faith and Aaliyah, with the first five taking the stand to testify about the alleged physical, sexual and emotional abuse they endured at the hands of the R&B singer. Aaliyah was the only victim who didn’t take the stand since she died in a plane crash in 2001. Three of the six, including Aaliyah, were minors when Kelly started to abuse them, prosecutors noted.

Two John Does also took the stand and testified. One man, named Louis, said Kelly sexually abused him when he was 17 years old. The other John Doe, Alex, testified that he began having sexual encounters with Kelly and others at Kelly’s direction at the age of 20.

Defense attorneys for Kelly repeatedly painted the accusers as liars, stalkers and groupies, dismissing their claims of physical and sexual abuse as a way to get money out of Kelly. “A lot of people watched ‘Surviving R. Kelly’ and now a lot of people are surviving off R. Kelly,” said Cannick in closing statements, referring to the explosive Lifetime documentary series that brought public attention back to Kelly’s alleged crimes.

Kelly’s criminal case in New York is only the first of his upcoming court battles. He is also facing several other sexual abuse charges, including in a federal case in Chicago and in two local cases in Chicago and Michigan.

CORRECTION: A previous version of this story mistakenly stated that sentencing was set for May 4, 2021.

Viola Davis Shares The Cute Way She Plans To Celebrate If She Scores EGOT Status
Lizzo Talks ‘Racist Origin’ Of Pop Music And What It’s Like Being A Black Pop Star
Congress Is Still Too Old And Too White. Send Help.
There’s A Mental Health Crisis Among Black Students. What Are HBCUs Doing To Help?
Jonathan ‘Hovain’ Hylton, Cherished And Influential Music Industry Leader, Has Passed Away