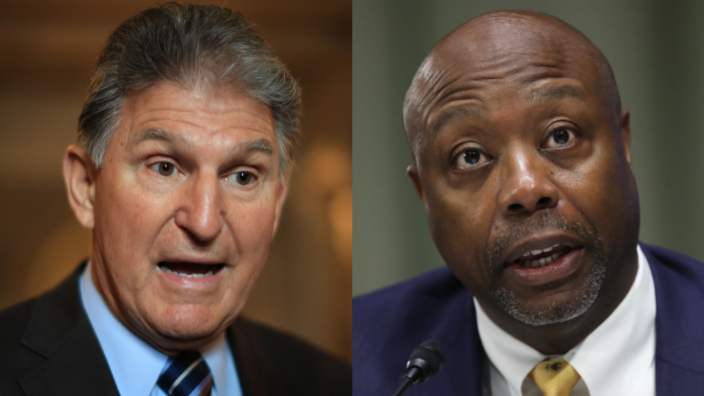 Senator Joe Manchin of West Virginia will be meeting next week with South Carolina Senator Tim Scott on the currently stalled police reform bill, the George Floyd Justice in Policing Act, according to sources who tell theGrio that movement on police reform could come soon.

Tiffany Crutcher, the twin sister of Terence Crutcher who was fatally shot by a Tulsa, Oklahoma police officer on Sept. 16, 2016, pressed the West Virginian Democratic lawmaker for details on the legislation’s progress during a chance encounter with Sen. Manchin in Washington.

Crutcher was on Capitol Hill Wednesday looking for answers on the 5th anniversary of her brother’s death when she ran into Manchin, who, as a moderate Democrat in the slim Democratic-majority U.S. Senate, holds significant weight as to whether the bill will get through procedural votes in the Senate.

Crutcher told theGrio that Manchin wants an “update” from Republican Sen. Tim Scott and told her that “something needs to be done” on this issue that has been lingering on the Hill since George Floyd was murdered by former officer Derek Chauvin in Minnesota over a year ago. Tiffany Crutcher remembers during the conversation with Sen. Manchin that “he [said he] was sorry for what happened to my brother and my family.”

Attorney Ben Crump, who has recently been named one of Time Magazine‘s 100 Most Influential People of 2021 said, “Terrence Crutcher’s blood is also on that bill.”

Crump told theGrio on Thursday that he is also calling for the U.S. Justice Department to investigate Crutcher’s case, in which he was shot and killed by former Tulsa officer Betty Shelby with his hands up in the air. The DOJ confirmed to theGrio that it received Attorney Crump’s letter petitioning for the department to investigate Crutcher’s death.

From this point, the DOJ will review the letter and deliberate internally on potential next steps.

There are also reports from Rolling Stone Magazine that President Joe Biden is said to be leaning in to calls from progressives to push Senators Manchin and Kyrsten Sinema of Arizona, another moderate Democrat, to abandon the filibuster in order to bypass needed Republican votes to pass the George Floyd policing bill, as well as voting rights legislation.

Sen. Scott, Sen. Cory Booker and U.S. Congresswoman Karen Bass of California have been negotiating since last year on a compromise for the police reform package.

Others in the search for justice against police-involved killings include Gwen Carr, the mother of Eric Garner who would have turned 51 this week had he survived the deadly chokehold he was placed in by New York City police six years ago.

“My son, Eric Garner, we have a hearing coming up in about a month … we are trying to hold those police officers accountable, the ones who was involved in my son’s death that day all over the city keep playing games with us, even though the judge ruled for us to get the papers that we need in order to have a trial. But we are getting games played as it always happens,” Carr said.

Thus far, on Tuesday, the Department of Justice issued department-wide policies explicitly prohibiting the use of “chokeholds” and “carotid restraints” unless deadly force is authorized, and limiting the circumstances in which the department’s federal law enforcement components are authorized to use unannounced entries, which are otherwise known as no-knock warrants. 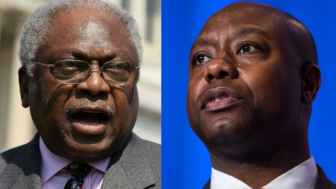 “There a lot of good provisions in the George Floyd Justice in Policing Act; eliminating no knock warrants, dealing with racial profiling training of police officers … ,” Congressman Bobby Scott told theGrio exclusively. “There’s a lot to be said for the act.”

Former Orlando police chief and now U.S. Congresswoman Val Demings told theGrio, “This is a moment for all of us to step up and be better so we can all do better. This is a moment where we can further bridge the gap between the police and the community.”

But the concern over the bill not coming up for air and passing is real.

Chicago Mayor Lori Lightfoot has discussed with her federal delegation, members of the Congressional Black Caucus and others, about her thoughts on the matter.

She told theGrio exclusively, “the bottom line is we got to get something done.”

“We don’t have the luxury of kicking the can down the road. We’re on the front lines. People are demanding immediate action. And we got to we’ve got to make sure that we’re responding to our constituents,” Lightfoot said as she emphasized the role of mayors in the national push for police reform.

Will Smith Understands If You Don’t Want To See His Latest Film
Jonathan ‘Hovain’ Hylton, Cherished And Influential Music Industry Leader, Has Passed Away
DJ Vlad Threatens To ‘Choose Violence’ After Saweetie’s Camp Declines Interview On Blogger’s Platform
DJ Khaled Receives Luxurious Toilets From Drake On His Birthday
There’s A Mental Health Crisis Among Black Students. What Are HBCUs Doing To Help?