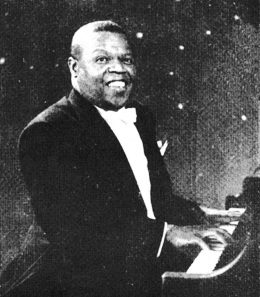 Composer, master pianist Ignacio Jacinto Villa Fernández, known by the stage name Bola de Nieve, was born Ignacio Jacinto Villa Fernández on September 11, 1911, in Guanabacoa, Cuba, to Domingo Villa, a chef, and Inés Fernández, a professional rumba dancer. The couple had 12 children. Villa Fernández began piano studies at age 12 and graduated from Escuela Normal para Maestro in 1927 at the age of 16. He continued studying piano and music composition at the Conservatorio de José Mateu in Havana. However, mambo, rumba, and folk songs were part of his everyday home life.

Because of his complexion, Villa Fernández was denied admission to the Universidad de la Habana. This omission pushed him to become a passionate supporter of the Fidel Castro regime. Villa Fernández worked as a chauffeur and played and conducted a combo at the Cinema Carral, a silent movie theater in his hometown, from 1927 to 1929. Afterward, he accompanied the renowned silent-film star and singer Rita Montaner at the Bar of the Sevilla Biltmore Hotel in Havana in 1930. In 1932, Montaner encouraged him to tour in Mexico City, Mexico.

In 1933, Villa Fernández performed throughout Cuba and abroad, including at Carnegie Hall in New York. After his presentation there he received nine standing ovations. In 1941, Villa Fernández was the behind-the-curtain pianist for the Argentinian musical comedy Melodías de América. He also composed “Si me pudieras quieter “ (“If you could love me”).

In 1953, Villa Fernández’s first album, Bola de Nieve, was released by the RCA Victor de México label.  The album featured his numerous compositions. Villa Fernández remained in Mexico for the next 12 years.

In 1965, six years after the Cuban Revolution which brought Fidel Castro to power, Villa Fernández returned to Cuba and operated one of Havana’s finest nightclub restaurants, Chez Bola, in front of the Hotel Nacional de Cuba. He performed nightly and the repertoire was almost always in Spanish, French, and Portuguese.

In 1968, Villa Fernandez returned to Mexico City, debuting as pianist and singer at the Teatro Politeama in the Mexican Federal District. There he played and sang Afro-Cuban compositions, especially the afrocanción “Bito Manué,” set to the work of the renowned Cuban poet Nicolás Guillén. In 1969, he collaborated with Arturo “Chico” O’Farrill and Girardo Rodríguez to release the album, Ecos Afro-Cubans. In 1970, Villa Fernández released the album El inolvidable inolvidable Bola de Nieve (The Unforgettable Bola de Nieve). This work, under EGREM and RCA Víctor Cubana labels, was followed by his last performance in 1971 at the Teatro Amadeo Roldán in Havana.

Ignacio Jacinto Villa Fernández developed folkloric Cuban elements with African influences that later influenced the mambo. He died on October 2, 1971, in a room at the Hotel Plaza Reforma in Mexico City, Mexico, from atheromatosis complications while en route to Peru. He was 60 and his remains were immediately transported to Guanabacoa. His last song, “Tú Me Has De Querer” (“You Have To Love Me”), was released posthumously in 1971.