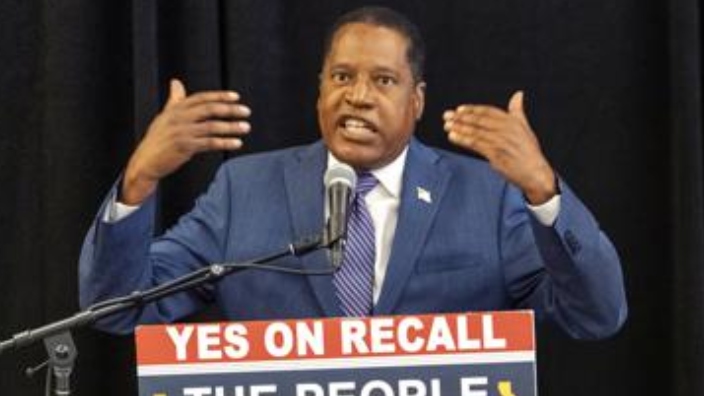 Perhaps the least surprising development in Tuesday’s California recall special election, a website paid for by the Larry Elder campaign is falsely claiming voter fraud ahead of its results.

The conservative radio show host appealed to his supporters on Monday, encouraging them to use an online form to report incidents of fraud. The site — forecasting its intent, as StopCAFraud.com — declares “We MUST Protect Election Integrity.”

“They say that in America, there are four boxes of liberty,” text on the website maintains. “The soapbox, the ballot box, the jury box, and the ammo box. When we vote we exercise our rights as Californians and as Americans to make our voices heard via the ballot box, having listened to others make theirs heard through the soapbox.”

“We trust in our elected officials to safeguard that ballot box,” it continued, “such that its results will truly reflect our will as Californians. However, when those officials, either through laziness or incompetence, allow thieves to steal amidst the dead of night and cheat our ballot box, we can no longer rely on its contents.”

The site enlists supporters to sign a petition “demanding a special session of the California legislature to investigate and ameliorate the twisted results of this 2021 Recall Election of Governor Gavin Newsom.”

StopCAFraud.com falsely claims there have been improperly formed ballots, undocumented ballots and that current poll workers should not be allowed to participate in a recount. On the website, it asks people to note if they voted in person and notes that by completing the form, they are providing consent to save their information.

Newsom called Elder’s claims of voter fraud an “extension of the Big Lie and ‘Stop the Steal,’” according to Newsweek.

“We’re four days out, the election hasn’t even happened, and now they’re all claiming election fraud. I think that’s important to highlight that,” the governor said on Sept. 10 per Newsweek.

Tuesday is the final day to cast a vote in the statewide special election featuring two questions: “Do you want to recall Governor Newsom?” and “If the governor is recalled, who do you want to replace him?” Early polls show nearly 58% of Californians are in favor of keeping the Democratic Newsom in place.

Mailed ballots must be postmarked by Sept. 14. In-person voting locations will offer same-day voter registration, replacement ballots, accessible voting machines and language assistance to those who need it on Tuesday.

In an NBC News report, Lee Drutman, a senior fellow at the New America think tank, called the sowing of doubt in the validity of elections “the standard GOP playbook.”

In an interview with the network, Elder refused to say if he would accept the results of Tuesday’s votes, saying instead: “Let’s all work together to find out whether or not the election tomorrow is a fair election.”

5 Influential Blerds From The 2010s
Ketanji Brown Jackson Sworn In As Supreme Court Justice In Historic Ceremony
R. Kelly Sentenced To 30 Years In Prison In Racketeering, Sex Trafficking Case
Simone Biles Set To Become Youngest Athlete To Receive Presidential Medal Of Freedom Honor
The ‘Murder Capitol’ Where They Murdered For Capital Was By American Design