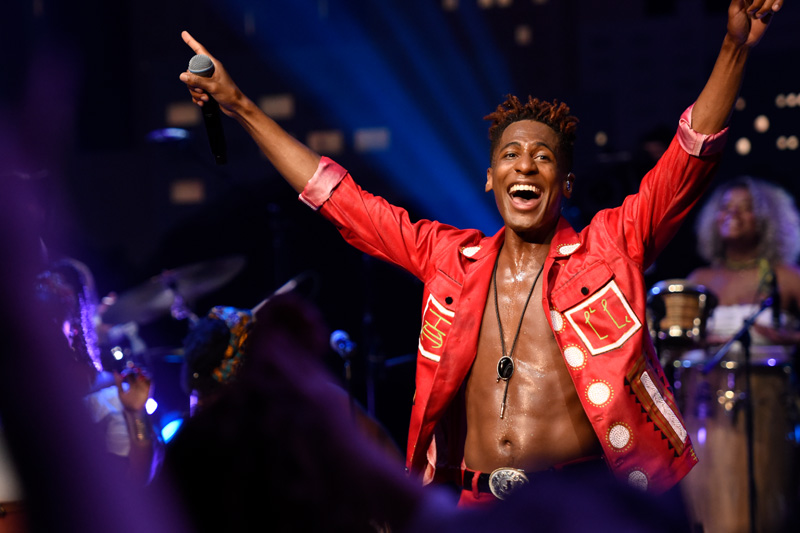 Jonathan (“Jon”) Michael Batiste is an American bandleader, composer, arranger, actor, “harmonabord” player, and television personality. He was born on November 11, 1986, in Metairie, Louisiana, and grew up in the neighboring New Orleans suburbs. By age 8, he was playing percussion and drums with his family’s band, the Batiste Brothers Band. He switched to piano at 11 at his mother’s suggestion and developed his skills by taking classical music lessons and transcribing songs from video games.

By the end of 2006, Batiste had also been a featured performer in South Africa and Europe. In 2007, at the age of 20, Batiste made his debut at the Concertgebouw in Amsterdam, producing and performing his own show. He conducted music clinics, classes and workshops throughout the Netherlands in inner-city schools and underprivileged neighborhoods. He was invited to Carnegie Hall to produce and perform in his own show with six young musicians from the Netherlands. The performance concluded with a finale he composed for choir, jazz combo and orchestral instruments.

Batiste’s notable career performances have included the national anthem at the 2017 NBA All Star Game; a tribute to Chuck Berry and Fats Domino during the 2018 Grammy Awards; and the 2020 Juneteenth celebration in Brooklyn. Batiste has been honored by the 2016 Forbes 30 Under 30 music list; named grand marshal of Endymion Parade in New Orleans; the American Jazz Museum Lifetime Achievement Award; and the NAACP Image Award. His music has also been nominated for three Grammy Awards.

In 2005, Batiste began performing regularly in New York with his Juilliard peers, bassist Phil Kuehn and drummer Joe Saylor. He later added Eddie Barbash on alto saxophone and Ibanda Ruhumbika on tuba. Batiste named the band Stay Human, which draws its moniker from the belief that human interaction during a live musical performance can uplift humanity in the midst of the “plug in, tune out” nature of modern society. In mid-2015, it was announced that Jon Batiste and Stay Human would serve as the house band on The Late Show with Stephen Colbert on CBS. The show premiered on September 8, 2015, and Jon continues to lead the band today.

In 2020 Batiste and Nine Inch Nails band members Trent Reznor and Atticus Ross composed the score for the Disney-Pixar animated film Soul. The song won a Golden Globe award, the British Academy Film Award (BAFTA), and the Academy Award for Best Original Score. Batiste’s Oscar win made him only the second Black composer to win an award in this category since Herbie Hancock in 1986.

The ‘Murder Capitol’ Where They Murdered For Capital Was By American Design
‘Tourists’ In Our Own Homeland
Alex Isley | Identity Through Music
Actor Kimberly Elise Sparks Outrage On Twitter For Celebrating End Of Roe V. Wade
Simone Biles Set To Become Youngest Athlete To Receive Presidential Medal Of Freedom Honor