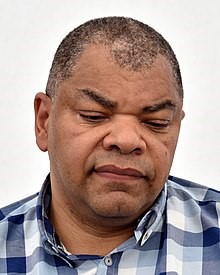 In the Czech Republic in 2011, the literary event of the year was the publication of a novel by Afro-Czech writer Tomáš Zmeškal, who was born in the capital city of Prague. He is the son of Czech citizen Anna Zmeškal, a multilingual office worker, and Joseph Lukoki, a political activist and intellectual from the Belgian Congo.

In the early 1960s, Lukoki trekked to the then-Czechoslovak Socialist Republic. Using the subterfuge of studying economics, he went there to rally support for an independent Republic of Congo. Seven years after Lukoki arrived under an assumed name, Tomáš Zmeškal was born. As a child he admitted he “was always scrawling something.” Friends tried to persuade him to study literature, but upon reaching adolescence he was put in a technical high school instead of a gymnasium where the focus would have been the liberal arts. His quest to study literature would have been facilitated had he joined the Communist Party, but that was something he refused to do.

Zmeškal’s courtship of a visiting British student and his desire to study English language and literature led to his relocation to London in 1987, where for the next 10 years he studied at King’s College (one of the colleges of the University of Cambridge). He became an Anglicist who especially delighted in reading Geoffrey Chaucer and Joseph Conrad. He also played flute in a jazz band, wrote short stories, and appreciated London’s cultural diversity. The failure of communism provided the impetus to return home. Back in Prague in 1990, he found work as a literature professor at Charles University and as a high school English instructor.

Zmeškal’s career as a writer shifted into high gear in 2008 with the publication of his internationally acclaimed first novel, Milostný dopis klínovým písmem (Love Letter in Cuneiform Script), an unusual, tragic love story that follows family members in post-World War II Czechoslovakia, interweaving places, eras, and fantasies. The novel, which overnight propelled him into the ranks of premier Czech writers, quickly sold out and went into second printing. It won the coveted European Union Prize for Literature, the Josef Škvorecký Prize for best original Czech prose work, and was translated into English and published by Yale University Press.

Zmeškal’s second novel, Životopis černobílého jehněte (Biography of a Black-and-White Lamb), the disturbing story of Czech biracial twins who are bullied during the nation’s repressive totalitarian regime, was shortlisted for the 2009 Magnesia Litera Prize. His personal nonfiction account of his trip to Africa to reconnect with his father and meet other relatives was titled Sokrates na rovníku (Socrates at the Equator).

Zmeškal has also been a docent, a literary editor, and a translator. Altogether his books have been translated into six languages. He continues to reside in Prague.