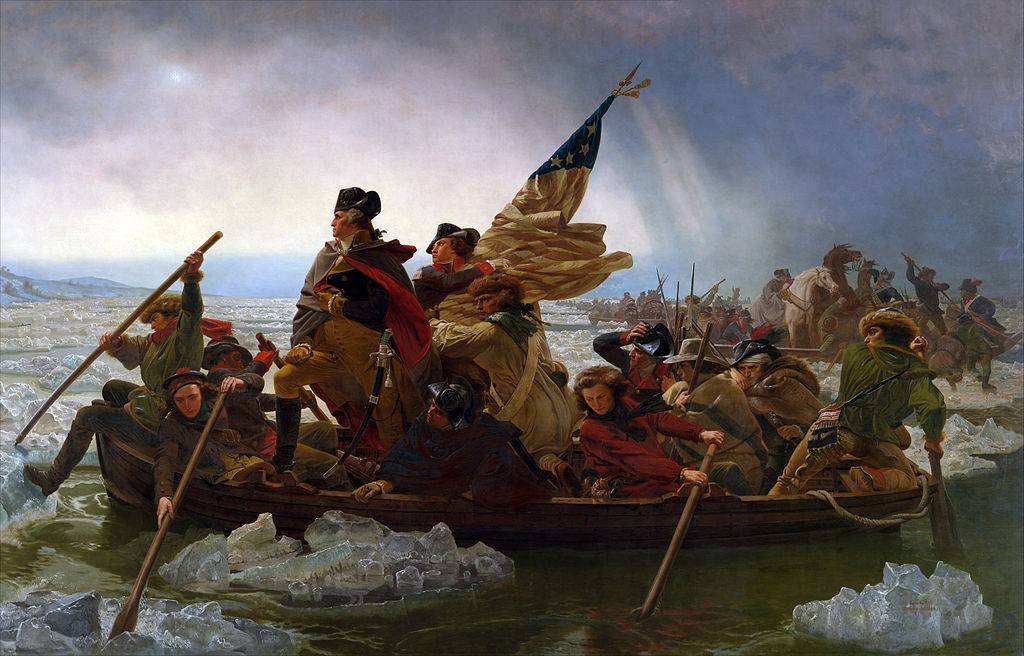 The mulatto slave William Lee appears together with his owner, U.S. President George Washington, in two and quite possibly three paintings, including the iconic Washington Crossing the Delaware by the artist Emanuel Leutze, where he is seen third from left in the boat where Washington is standing. Probably born between 1750 and 1752, Lee was purchased by Washington in 1768 from Mary Smith Small Lee, the widow of a military officer in Westmoreland County, Virginia, for the price of 61 pounds, 15 shillings. Washington selected Lee for domestic work and he soon became his valet. His younger brother, Frank Lee, was purchased for 50 pounds.

Lee, now residing at Mount Vernon, Washington’s plantation, proved to be a masterful horseman who, with a French horn slung over his back, was much appreciated by Washington and his friends in a fox hunt. But their wartime exploits brought Washington and Lee closer. Lee endured with Washington and American Revolutionary War soldiers the brutal 1777-1778 winter at Valley Forge, Pennsylvania; was mentioned by others as being in New Jersey with Washington at the Battle of Monmouth in 1778. He was also described as galloped near Washington all the way to the Battle of Yorktown in Virginia in 1781. Said to be literate, he was entrusted to carry Washington’s private and public papers, and on the battlefield, he was “armed with a pistol, carbine, and his spy glass.” As a slave of Washington, however, Lee could not be a regular soldier in the Continental Army.

During the American Revolution, Washington’s cousin, Lund Washington, in a letter made the only recorded reference to Lee’s first wife and child but their names and what became of them remains unknown. Lee’s second wife was Margaret Thomas (a.k.a. Peggy Lee), a free African American seamstress and laundress from Philadelphia. As a special favor to Lee, a disinclined Washington gave her permission to live at Mount Vernon with its numerous slaves, but there is no evidence she ever relocated there and may have refused to do so. 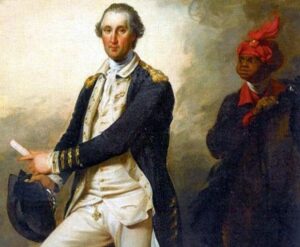 A couple of bad falls on his knees crippled Lee in his later years, forcing him to wear a brace. When Washington was elected President, Lee hoped to ride alongside him to New York City, the new nation’s first capital, but this was not possible.

Washington’s most loyal companion, the man who could have like so many other slaves, defected to the British to both free himself and provide colonial loyalists and the British with invaluable intelligence, instead spent his last days working as a shoemaker and living quietly at Mount Vernon.

In 1799, shortly before Washington’s death, the nation’s first President wrote a new will in which he stipulated all of his slaves were to be set free upon the death of his surviving wife but that immediately upon his (Washington’s) death Lee would become a free man and gifted a thirty-dollar annuity. Despite being free, Lee continued to reside at Mount Vernon and died there in the winter of 1810, around the age of 85.

Two other heroic paintings celebrating Washington that feature Lee in decorative headdress are by the Frenchman Jean-Baptiste Le Paon in the Philadelphia Museum of Art (1780) and the American John Trumbull (engraved by Valentine Green) held at the Museum of Fine Arts in Houston, Texas.

Democrats Want Biden To Be More Aggressive On Abortion Rights
California Beach Returned To Family Nearly 100 Years After It Was Taken From Black Owners
How Technology Alters The Fight For Reparative Justice
The Battle of Mogadishu (1993)
1955 Warrant In Emmett Till Case Found, Family Seeks Arrest Of Woman