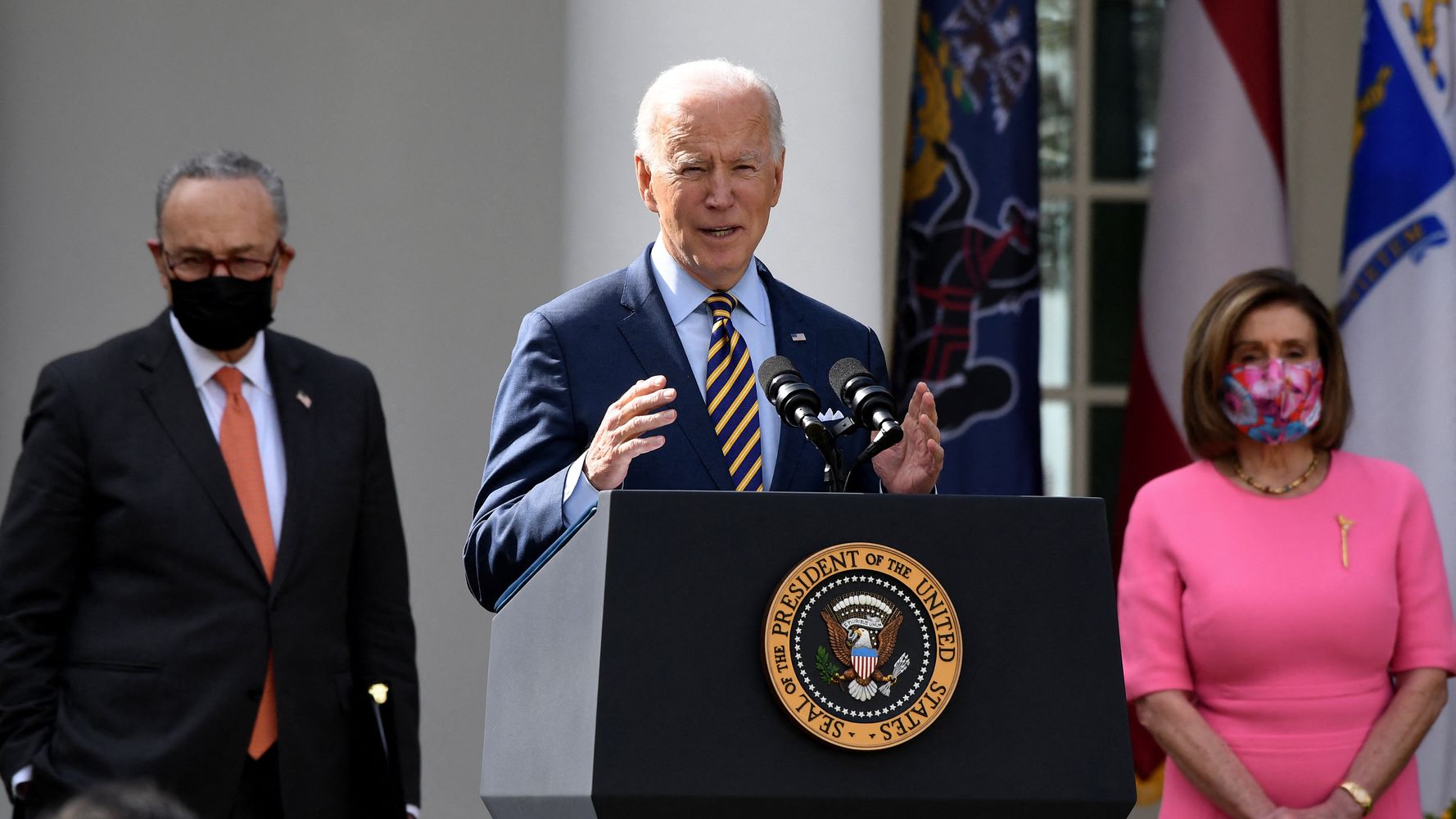 President Joe Biden and congressional Democrats swiftly condemned Texas Republicans this week for a newly enacted state law that bans abortions after six weeks and even awards money to people who report on someone assisting another person terminating a pregnancy.

Democrats have made it clear they don’t support the policy or the Supreme Court’s decision to let the law stand while challenges move through the courts. Now they have to decide whether to actually do something about it.

There are a few options, none of them easy. House Speaker Nancy Pelosi (D-Calif.) announced Thursday that Democrats will vote on the Women’s Health Protection Act, a bill that would enshrine abortion rights into federal law. Democrats could also attempt to expand the Supreme Court to ensure it’s less skewed toward conservatives.

But neither of those efforts can pass the Senate, given its 50-50 split and the 60-vote margin needed to bypass a filibuster.

Democrats could try to get rid of the filibuster altogether ― which progressives are already pushing for to pass voting rights legislation ― but they currently don’t have the votes to do it.

“I support ending the filibuster. I support codifying Roe v. Wade. I would support reforming the Supreme Court,” Sen. Tina Smith (D-Minn.) told HuffPost. “But we need to be real. There are not votes in the U.S. Senate to do any of those things.”

Democrats also have the option of sitting back and allowing abortion rights to be decimated while they control the White House, House of Representatives and the Senate ― something that many voters would see as a betrayal.

“It’s going to be a real problem,” particularly for new voters who supported Democrats in 2020, Rep. Pramila Jayapal (D-Wash.), chair of the Congressional Progressive Caucus, told HuffPost. “They gave us the House, the White House and the Senate, and they want to see us deliver. And if we don’t deliver on real, substantive change, we’re going to lose them again.”

Biden vowed to take action to fight Republicans’ assault on abortion rights, including through legislation, though he did not address calls to end the filibuster or reform the courts.

In a statement on Thursday, he directed the Gender Policy Council and the Office of the White House Counsel “to launch a whole-of-government effort to respond to this decision.”

That will include investigating what the departments of Justice and Health and Human Services can do to ensure that women in Texas can access abortions, and taking a closer look at “what legal tools we have to insulate women and providers from the impact of Texas’ bizarre scheme of outsourced enforcement to private parties,” according to the statement.

White House press secretary Jen Psaki said Wednesday that Biden would also “continue to call for the codification of Roe,” noting that both Biden and Vice President Kamala Harris spoke about the need for such legislation during the campaign. “This highlights even further the need to move forward on that effort,” Psaki said at a press briefing.

Psaki said she could not comment on Biden’s stance on the Women’s Health Protection Act, though, without looking into the particulars of the bill.

The House is currently in recess through Sept. 20. The Senate is back on Sept. 13. Democrats’ legislative agenda is already packed, but Pelosi vowed Thursday to add in the abortion rights measure to combat Texas’ abortion law, S.B. 8.

“SB8 is the most extreme, dangerous abortion ban in half a century, and its purpose is to destroy Roe v. Wade, and even refuses to make exceptions for cases of rape and incest,” she said in a statement. “This ban necessitates codifying Roe v. Wade.”

The bill likely has the votes to pass the House, but Democrats’ control of the Senate is very narrow: They hold only 50 votes, plus Harris’ additional tiebreaking vote. Under current filibuster rules, most legislation requires 60 votes ― which is why some Democrats are pushing to amend those rules to get abortion protections passed.

“We must pass federal laws to protect the right to safe, legal abortion,” Sen. Kirsten Gillibrand (D-N.Y.) tweeted on Thursday. “We must pass the Women’s Health Protection Act to put an end to these cruel state bans on our rights. And we can’t let the filibuster stand in our way.”

Jayapal said Biden should do more to push for filibuster reform.

“This is just another example of why we have to make a very difficult choice to actually restore democracy to the Senate and to reform or eliminate the filibuster,” Jayapal said. “We’ve been making the case for eliminating the filibuster, but I think the urgency of it has gone up.”

A spokesperson for Senate Majority Leader Chuck Schumer (D-N.Y.) did not respond to a request for comment on how he plans to proceed.

Other Democrats want to go even further by enacting major court reform. This legislation would also likely be blocked by the filibuster, though.

“Democrats can either abolish the filibuster and expand the court, or do nothing as millions of peoples’ bodies, rights, and lives are sacrificed for far-right minority rule,” Rep. Alexandria Ocasio-Cortez (D-N.Y.) tweeted early Thursday. “This shouldn’t be a difficult decision.”

There are other legislative options, too. Rep. Carolyn Maloney (D-N.Y.), who chairs the House Committee on Oversight and Reform, proposed repealing the Hyde Amendment, a decades-old legislative provision that bans the use of federal funds to pay for abortion except in cases of rape, incest or saving the life of the mother.

“The House voted to do so by voting to pass our package of spending bills in July,” she told HuffPost in a statement. “The Senate must do the same.”

Maloney also called for lifting restrictions on medication abortion, or the use of medicine to terminate a pregnancy. She and other Democrats recently introduced a resolution calling on the Food and Drug Administration to lift its restrictions on one abortion drug, mifepristone.

“Medication abortion is a very safe, common way to access abortion care ― in fact, nearly half of all abortions in the U.S. are medication abortion,” she said. “The FDA needs to act now to provide this safe and simple way for people to have their abortions at home.”

For the moment, Democrats can rail against the Texas law all they want, but all eyes will be on what they do about it. For Smith, a Democratic senator working with a Democrat-led Senate, House and White House, the most effective solution is to channel that outrage into winning more Democratic seats in the 2022 elections. The votes simply aren’t there, she said, to nix the filibuster.

“It is stunning to me that a rule of the U.S. Senate with a racist past is the thing that is stopping us from protecting women when they need us to protect them,” Smith said. “I am deeply frustrated as a U.S. senator. … The only thing that I know to do is go out there and organize, organize, organize and win elections.”

The senator emphasized that the Supreme Court separated itself “from a vast majority of voters,” even in Texas, by letting the state’s extreme anti-abortion law take effect. That lends itself to Democrats fighting back at the polls.

“I do believe this is a galvanizing moment,” she said.

Regardless of whether Democrats take legislative action in near term, their party is certain to make abortion a campaign issue moving forward. The Democratic Senatorial Campaign Committee issued a statement saying “freedom for women to make our own health care decisions is on the ballot in 2022.”

“This attack on women’s health care is a powerful reminder of the stakes in next year’s election — and why we must defend a Democratic Senate majority with the power to confirm or reject Supreme Court justices,” DSCC spokesperson Jazmin Vargas said in a statement.

Black Fireman finds a noose left in his locker
Filmmaker Raoul Peck Talks New Series ‘Exterminate All the Brutes’
Lizzo Speaks About Facing Stigma As A Black Pop Music Artist: ‘You Just Gotta Get Used To Me’
Odell Beckham Jr. Escorted Off A Plane In Miami After Dispute With Flight Crew
Jump In Twitter Hate Speech Is Unprecedented, Researchers Find