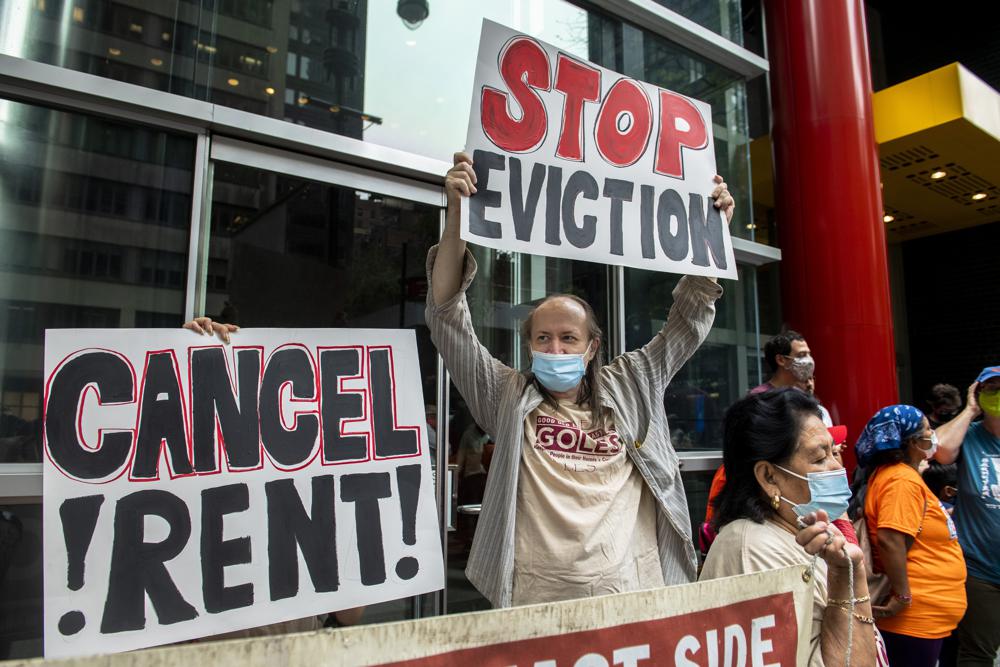 The Supreme Court’s conservative majority is allowing evictions to resume across the United States, blocking the Biden administration from enforcing a temporary ban that was put in place because of the coronavirus pandemic.

The court’s action ends protections for roughly 3.5 million people in the United States who said they faced eviction in the next two months, according to Census Bureau data from early August.

The court said late Thursday in an unsigned opinion that the Centers for Disease Control and Prevention, which reimposed the moratorium Aug. 3, lacked the authority to do so under federal law without explicit congressional authorization. The justices rejected the administration’s arguments in support of the CDC’s authority.

“If a federally imposed eviction moratorium is to continue, Congress must specifically authorize it,” the court wrote.

The three liberal justices dissented. Justice Stephen Breyer, writing for the three, pointed to the increase in COVID-19 caused by the delta variant as one of the reasons the court should have left the moratorium in place. “The public interest strongly favors respecting the CDC’s judgment at this moment, when over 90% of counties are experiencing high transmission rates,” Breyer wrote.

White House press secretary Jen Psaki said the administration was “disappointed” by the decision and said President Joe Biden “is once again calling on all entities that can prevent evictions — from cities and states to local courts, landlords, Cabinet Agencies — to urgently act to prevent evictions.”

Rep. Cori Bush, D-Mo., who had camped outside the Capitol as the eviction moratorium expired at the end of last month, said Congress must act to reinstate the protections.

“We are in an unprecedented and ongoing crisis that demands compassionate solutions that center the needs of the people and communities most in need of our help. We need to give our communities time to heal from this devastating pandemic,” she said in a statement. “We didn’t sleep on those steps just to give up now. Congress must act immediately to prevent mass evictions.”

It was the second loss for the administration this week at the hands of the high court’s conservative majority. On Tuesday, the court effectively allowed the reinstatement of a Trump-era policy forcing asylum seekers to wait in Mexico for their hearings. The new administration had tried to end the Remain in Mexico program, as it is informally known.

On evictions, President Joe Biden acknowledged the legal headwinds the new moratorium would likely encounter. But Biden said that even with doubts about what courts would do, it was worth a try because it would buy at least a few weeks of time for the distribution of more of the $46.5 billion in rental assistance Congress had approved.

The Treasury Department said Wednesday that the pace of distribution has increased and nearly a million households have been helped. But only about 11% of the money, just over $5 billion, has been distributed by state and local governments, the department said.

The administration has called on state and local officials to “move more aggressively” in distributing rental assistance funds and urged state and local courts to issue their own moratoriums to “discourage eviction filings” until landlords and tenants have sought the funds.

A handful of states, including California, Maryland and New Jersey, have put in place their own temporary bans on evictions. In a separate order earlier this month, the high court ended some protections for New York residents who had fallen behind on their rents during the pandemic.

The high court hinted strongly in late June that it would take this path if asked again to intervene. At that time, the court allowed an earlier pause on evictions to continue through the end of July.

But four conservative justices would have set the moratorium aside then and a fifth, Justice Brett Kavanaugh, said Congress would have to expressly authorize a new pause on evictions. Neither house of Congress has passed a new evictions moratorium.

The administration at first allowed the earlier moratorium to lapse July 31, saying it had no legal authority to allow it to continue. But the CDC issued a new moratorium days later as pressure mounted from lawmakers and others to help vulnerable renters stay in their homes as the coronavirus’ delta variant surged. The moratorium had been scheduled to expire Oct. 3.

Landlords in Alabama and Georgia who challenged the earlier evictions ban quickly returned to court, where they received a sympathetic hearing. U.S. Judge Dabney Friedrich, an appointee of former President Donald Trump, said the new moratorium was beyond the CDC’s authority.

But Friedrich said she was powerless to stop it because of an earlier ruling from the federal appeals court in Washington, D.C., that sits above her. The U.S. Court of Appeals for the District of Columbia Circuit likewise refused to put the CDC order on hold, prompting the landlords’ emergency appeal to the Supreme Court.

The earlier versions of the moratorium, first ordered during Trump’s presidency, applied nationwide and were put in place out of fear that people who couldn’t pay their rent would end up in crowded living conditions like homeless shelters and help spread the virus.

The new moratorium temporarily halted evictions in counties with “substantial and high levels” of virus transmissions and would cover areas where 90% of the U.S. population lives.

The Biden administration argued that the rise in the delta variant underscored the dangers of resuming evictions in areas of high transmission of COVID-19. But that argument did not win broad support at the high court.