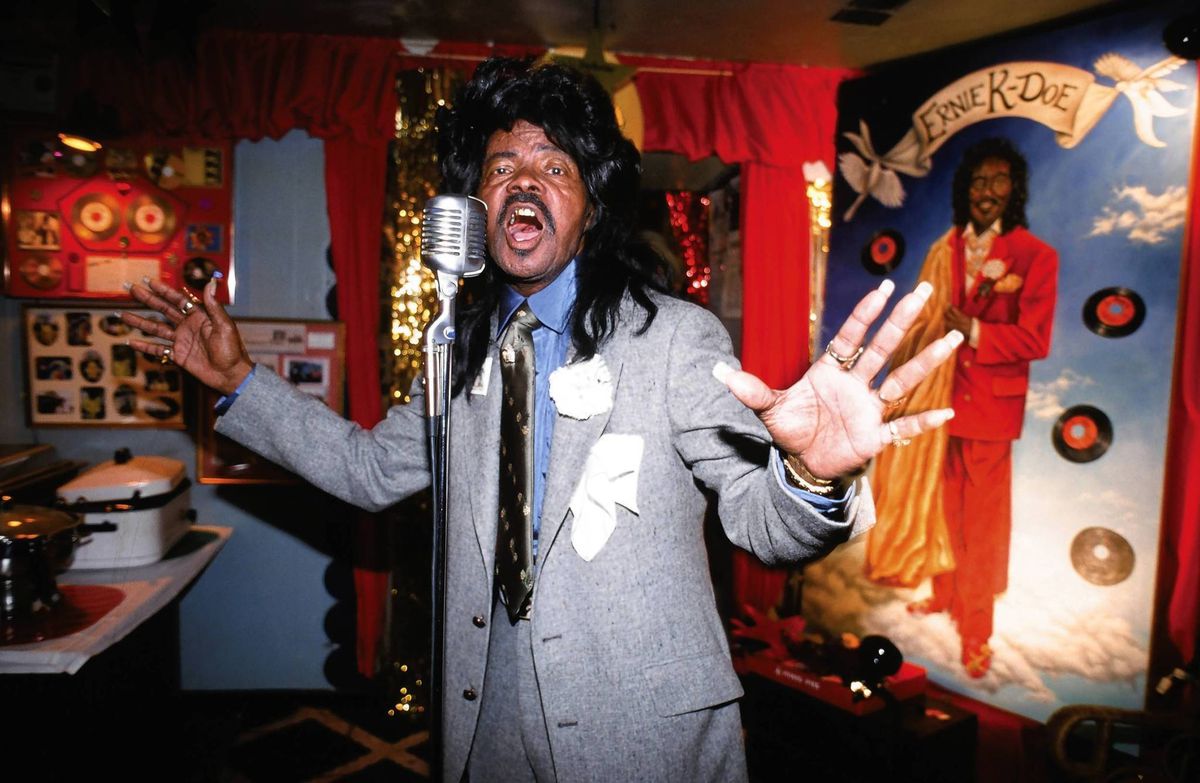 Born in New Orleans, Louisiana on February 22, 1933, Ernest Kador Jr., whose stage name was Ernie K-Doe, was a R&B singer and drummer who was best known for his 1961 hit, “Mother-in-Law,” which went to no. 1 on both the Billboard pop chart and the Billboard R&B chart.

K-Doe first recorded in 1954 with a band known as the Blue Diamonds. His sole hit, “Mother-in-Law”, was written by fame New Orleans musician, Allen Toussaint, who also played piano on the song. It is the bass voice of Benny Spellman singing the title phrase that gave the song its catchy power.

K-Doe found some success with two other songs on the R&B top 40 with “Te-Ta-Te-Ta-Ta” that reached no. 21 in 1961 and “Later for Tomorrow” which reached no. 37 in 1967. In 1970, he recorded and released in the UK, the song “Here Come the Girls.” It was re-released in 2007 and used in an ad campaign for Boots stores, a British-based beauty and pharmacy chain. The song was also covered by the British group, the Sugarbabes and reached no. 3 on the UK charts in 2008.

In the 1980s, K-Doe took his career into radio broadcasting, hosting programs on New Orleans community stations WWOZ and WTUL. The shows gained a reputation for its explosive announcements and self-promotion format. K-Doe was known to use such catch phrases as “Burn, K-Doe, Burn!”, and I’m a Charity Hospital Baby.” Charity Hospital was the main hospital in New Orleans where African Americans were born before desegregation in the 1960s.

In the 1990s, K-Doe began billing himself as “The Emperor of the Universe” and wore a cape and crown. He continued to perform and record under that banner until too ill to do so. One of his last performances was at the New Orleans Aquarium of the Americas as a benefit to raise funds for people with disabilities. The show concluded with K-Doe performing seven different versions of his hit song, “Mother-in-Law,” while dressed in a green plumed cape, indicative of New Orleans décor.

In pursuit of a venue to further showcase his talents, K-Doe and his wife, Antoinette, purchased a bar located at 1500 N. Claiborne Avenue in the Treme district and gave it the name, Mother-in-Law Lounge. The bar served as a music club and community center, and closed after extensive damage from Katrina in 2005. The lounge reopened after repairs, but then closed again after the death of Antoinette. The lounge once again reopened in 2014 when it was purchased by renowned trumpeter and chef, Kermit Ruffins, under the name Treme Mother-in-Law Lounge.

Ernie K-Doe died in New Orleans on July 5, 2001, of kidney and liver failure. He was 68. After being given a traditional Jazz funeral, his body was interred in the 200 year-old Duval tomb in Saint Louis Cemetery number 2. The Duval family offered burial space in the family site after K-Doe’s family, and friends campaigned to have his body remain in New Orleans. In 2009, Ernie K-Doe was inducted into the Louisiana Music Hall of Fame.

Netflix And Tim Burton Called Out For Racist Portrayals Of Black Characters In ‘Wednesday’
Cardi B Fires Back At Critics Who Say She’s Taking Too Long To Release An Album
They Already Have Enough Toys! Here’s What to Gift The Kid Who Has Everything!
Black Fireman finds a noose left in his locker
After A Year, Miami Man Is Arrested For Murder Of Woman Who Attempted To Catch Him With Stripper