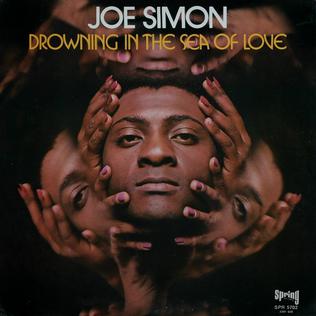 Baritone and arranger Joe Simon was born on September 2, 1943, in Simmesport, Louisiana. He picked cotton in the fields as a young boy and began singing in his father’s Baptist church. In 1953, the Simon family relocated to Richmond, California. As a teenager, he joined the Golden West Gospel Singers. In 1959, the ensemble changed its name to the Golden Tones and included other genres of music, releasing “Little Island Girl” and “Doreetha,” which were followed by the singles “You Left Me Here to Cry Alone” and “Ocean of Tears.”

In 1964 Simon signed with his first label, Vee-Jay, and released a handful of singles there, including the R&B Top 10 hit “My Adorable One” which as he later recalled, was recorded in a chicken coop. In 1965, Simon’s “Let’s Do It Over” reached no. 13 on Billboard’s R&B chart.  The following year, 1966, he released “Teenager’s Prayer” which peaked at no. 11 on Billboard’s R&B chart.

In 1968 Simon released “The Chokin’ Kind” which reached no. 1 on the R&B chart, no. 13 on Billboard Hot 100, and spent 12 weeks on the charts. It was Simon’s first million-selling record. His singles, “Farther on Down the Road” and “Yours Love” were released in 1969. In 1970 Simon was given a Grammy for Best Male R&B Vocal Performance.

In 1971, Simon, now working with Kenny Gamble and Leon Huff, charted with “Drowning in The Sea of Love,” the title song of the album of the same name. In 1972 his single, “Power of Love” topped the R&B chart but “Drowning in The Sea of Love” was the best-selling single of his career, selling more than 1.5 million copies. Also, in 1972 he received Grammy nominations for the “Best Rhythm & Blues Performance-Male” and best album, The Power of Love.

By 1984 Simon quit the secular recording industry and returned to his gospel roots when he became an evangelist leading the Bishop Joe Simon Community Crusade in Flossmoor, Illinois. By that point he had married Melanie Simon, a licensed esthetician, and the couple would eventually have had four children, seven grandchildren, and two great-grandchildren.

Over his career between 1964 and 1981 Simon released 27 albums and had 51 songs on the U.S. Pop and R&B charts. He was inducted as a Pioneer Award honoree by the Rhythm and Blues Foundation and into the Gospel Music Hall Fame in 1999. His most recent album, Time to Change was released in 2007. Ten years later he was inducted into the Louisiana Music Hall of Fame.

In 2017, Louisiana Highway 1 over the Atchafalaya River Bridge in Simmesport, Louisiana, was designated as Joe Simon Boulevard.