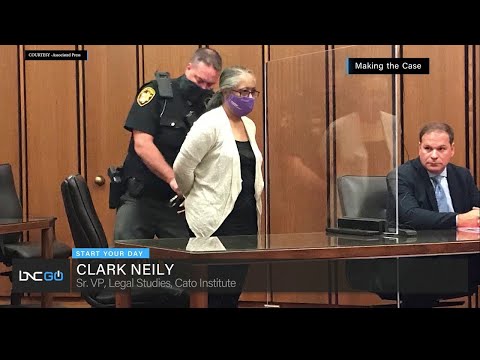 A white woman in Ohio was paroled after being charged with 22 counts of theft, including embezzlement and money laundering. A day later, a Black woman, who stole $40,000 and then went on to complete a gambling treatment program and find a new job before trial, was sentenced to 18 months in prison. “The moral of the story is stealing is not good, theft is not good, [but] theft by Black is even worse,” said Reed. “That’s what America is saying there.” Hill chimed in noting that it’s not just cops, but the entire criminal justice system that is to blame for Black people receiving 20% higher sentences than white people for the same crimes.

Reed raised the question as to why she, or any other American, should vote to convict any Black person for a crime until white people are treated “somewhat the same in a system of a justice.” Reed and Hill agree that one solution is to sit on the jury when summoned, to make sure Black people are being judged rightfully by their peers in court, and also to vote in midterm elections the same way we vote in the presidential election. “We got to do a better of job of voting in these local elections so that we can start to at least try to change things, once again, a system that is severely broken and has been throughout history for Black folks.”

A Lot Of Far-Right Candidates Got Walloped In This Week’s GOP Primaries
‘Tourists’ In Our Own Homeland
Fastest Sprinter In The Nation To Attend College With No Track Team
‘Shark in the Water’ Singer V.V. Brown Talks ‘Degrassi’ Success
2 London Cops Fired After Racist Post About Meghan Markle