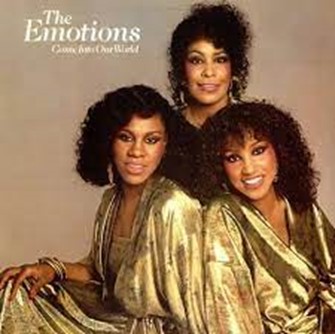 The Emotions were an American Grammy Award-winning soul/R&B vocal ensemble from Chicago, Illinois who began as a gospel group called the Hutchinson Sunbeams in 1962. The group transitioned into R&B music in 1963. The Emotions were four sisters: Wanda Hutchinson-Vaughn, born December 17, 1951; Jeanette Hutchinson-Hawes, born November 28, 1952, Shelia Hutchinson, born December 17, 1953, and Pamela Rose Hutchinson, born on September 18, 1958. They were taught the rudiments of music, harmonizing, and how to play the guitar as small children by their father, Joe Hutchinson.

Their first hit record came in 1969, after signing with Volt Records. They released the single “So I Can Love You” which became a top 40 pop hit and peaked at #3 on the R&B chart, remaining there for ten weeks.

In 1976, the Emotions released their first album, Flowers on the Columbia Records label. It rose to #5 upon the Billboard Top R&B/Hip-Hop Albums chart and #45 on the Billboard 200. The following year, 1977, they released their second album, Rejoice. Afterwards the group decided to work with composer Maurice White of Earth, Wind, and Fire fame. With his help their 1977 hit, Best of My Love,” became a top seller on the pop and R&B charts but it was also a disco hit that peaked at #1 on the disco chart and remained there for 11 weeks. “Best of My Love” was their first international as well, reaching the top ten in Australia and New Zealand. The group won a 1977 Grammy Award for Best R&B Performance by a Duo or Group with Vocals. On September 8, 1977, the group made the cover of Jet magazine

In 1978 the Emotions released the album, Sunbeam, which included the single “Smile” which peaked at #6 on the Billboard R&B chart. In 1979 their ballad, “The Best Part of a Love Affair” peaked at #27 on the R&B chart. Later that year they partnered with Maurice White and Earth, Wind and Fire to release “Boogie Wonderland,” the disco and R&B hit that reached #2 on the R&B chart and #6 on the pop chart. The song sold over one million records and was nominated for a Grammy.

By the 1980s the Emotions began to decline in popularity and as a result changed labels frequently. In 1984, the Emotions, now with the Red label, released the album Sincerely, which included the single “All Things Come in Time.” The following year, 1985, they signed with Motown and released the album If I Only Knew.

The Emotions, who released 13 albums over their career, were inducted into the R&B Hall of Fame at Harlem’s The Apollo Theater in 2001. Now, a quartet with only Pamela Hutchinson, the youngest sister, still performing, the group collaborated with Snoop Dogg on his 2006 song “Life.” Pamela, the last surviving member of the Emotions, died on September 18, 2020, in Chicago at 61.