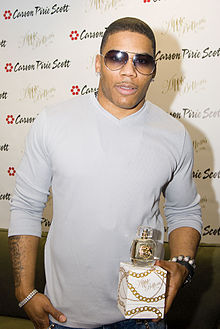 Rapper, singer, songwriter, and entrepreneur known by his stage name, Nelly, was born Cornell Iral Haynes Jr., on November 2, 1974, in Austin, Texas to Rhonda (Mack) and Cornell Haynes. Haynes’ father was in the U.S. Air Force, and shortly after his birth, the family lived in Spain until he was three years old. By the age of seven, Haynes parents divorced, and his mother relocated to St. Louis, Missouri. Haynes spent time with other family members for a few years, until his mother moved to University City, a St. Louis County suburb, in 1987. Away from negative influences, Haynes began to focus more on sports in school and writing rhymes and attended training camps for the Atlanta Braves and the Pittsburgh Pirates. Haynes played for the St. Louis Amateur Baseball Association while attending University City High School, where he also played football, basketball and baseball.

During his senior year of high school in 1993, Haynes formed a group called the St. Lunatics, with schoolmates Robert Kyjuan Cleveland and Lavell “City Spud” Webb. The trio began performing at local talent shows, colleges, and nightclubs, and were soon joined by friends Torhi “Murphy Lee” Harper, Ali Jones, and Corey “Slo’Down” Edwards. Successful in the St. Louis area underground music scene, they released the single, “Gimme What You Got” in 1997. The group struggled through as its success was limited to the St. Louis area prompting members to branch out to start their own careers.

Haynes signed a contract with Universal Records in 1999 and released hit debut album, Country Grammar in 2000. The album was a huge success and has since been certified 10 times platinum, after selling over 10 million copies worldwide.  Meanwhile, St. Lunatics member City Spud was arrested and sentenced to ten years in jail, and Haynes began to wear a band aid on his face in solidarity. The remaining members of The St. Lunatics were then signed to Universal Records, and their first album Free City, in homage to their jailed member, was released in 2001. Haynes second album, Nellyville, released in 2002, was certified seven times platinum. In September 2004, Haynes simultaneously released two albums, Sweat and Suit. Both albums have received five times multi-platinum status. His next albums, Brass Knuckles (2008), 5.0 (2010), and M.O. (2013) did not achieve the same success as his others, and the artist began to focus on other areas of his career.

Haynes made his film debut in 2001 in the movie, Snipes. He released his Nike sneaker “Air Derrty” in 2003 and owns two fashion lines, Vokal (for men) and Apple Bottoms (for women). He performed during Super Bowl XXXV (2001) and XXXVIII (2004) halftime shows and has played in several World Series of Poker tournaments. Dedicated to giving back to his community, Haynes established the 4Sho4Kids foundation, the Jes U 4 Jackie campaign, and the annual “White and Black Ball.” In 2013, Haynes founded the Ex’treme Institute, a music production school in St. Louis. He has won several awards including a BET award, 4 American Music Awards, 9 Billboard Music Awards, 3 Soul Train Music Awards and 3 Grammy Awards.  Haynes has a daughter named Chanel, a son named Cornell Haynes III, and owns three homes in the St. Louis, Missouri area.

Black Fireman finds a noose left in his locker
Kappa Alpha Psi’s Rep. Hakeem Jeffries Elected House Democratic Leader
After A Year, Miami Man Is Arrested For Murder Of Woman Who Attempted To Catch Him With Stripper
A Buckingham Palace Aide Resigns After She Allegedly Harassed Black Woman With Racist Questions
Netflix And Tim Burton Called Out For Racist Portrayals Of Black Characters In ‘Wednesday’