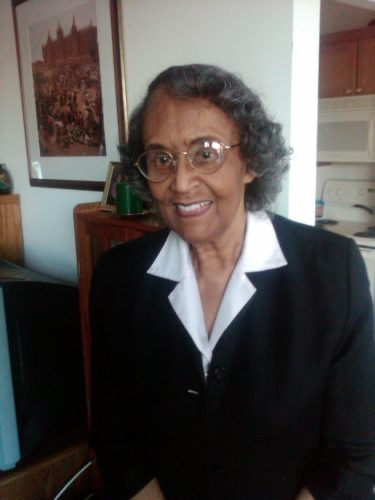 Audrey Smedley, one of the nation’s first African American women anthropologists, was born in Detroit in 1930, the eldest daughter of Ulysses and Mattie Smedley. While raising six children, her mother maintained a career as a beautician; her father owned and operated a gas station with his son, James, while working for Ford Motor Company for 33 years before retiring.

After completing her education in Detroit Public Schools, Audrey attended the University of Michigan on a scholarship. She intended to study law and dreamed of working for the United Nations. In 1954, Smedley earned a Bachelor of Arts degree in the history, letters, and law program and a Master of Arts in anthropology with a concentration in history in 1957 from the University of Michigan. From 1959 to 1961, she investigated the social and economic organization of the Birom ethnic group of Northern Nigeria to complete her dissertation in late 1966. As a single mother raising two boys, David and Brian, in England, Smedley graduated from Victoria University of Manchester with a Ph.D. in social anthropology in 1967.

Smedley is best known for her studies of the history of “race,” a concept that she argues emerged in the Americas to justify enslavement and genocide against Africans. She argued that folk culture popularized race while science gave it authority in her book Race in North America: Origin and Evolution of a Worldview (1993).

Smedley is survived by her younger brother Laconia and her two sons, Brian and David, who is a sculptor and former coordinator of the Sculpture Program at Howard University. She also has two grandchildren, Avery and David. She died at her home in Beltsville, Maryland, on October 14, 2020 at the age of 90.

Grammys Host Trevor Noah Previews The 2023 Awards, Talks Dance Lessons With Cardi B And This Harry Styles Interaction
Twitter Rallies Around TikTok Influencer Keith Lee As He Responds To TV Producer Who Appeared To Accuse Him Of Stealing Idea
An 8-Year-Old Michigan Girl Saved Her Great-Grandmother After She Got Stuck Under A Car
Parents Of Tyre Nichols Accept Invitation To State Of The Union
Bengals Players Rally Around Teammate Devastated Over Costly Penalty